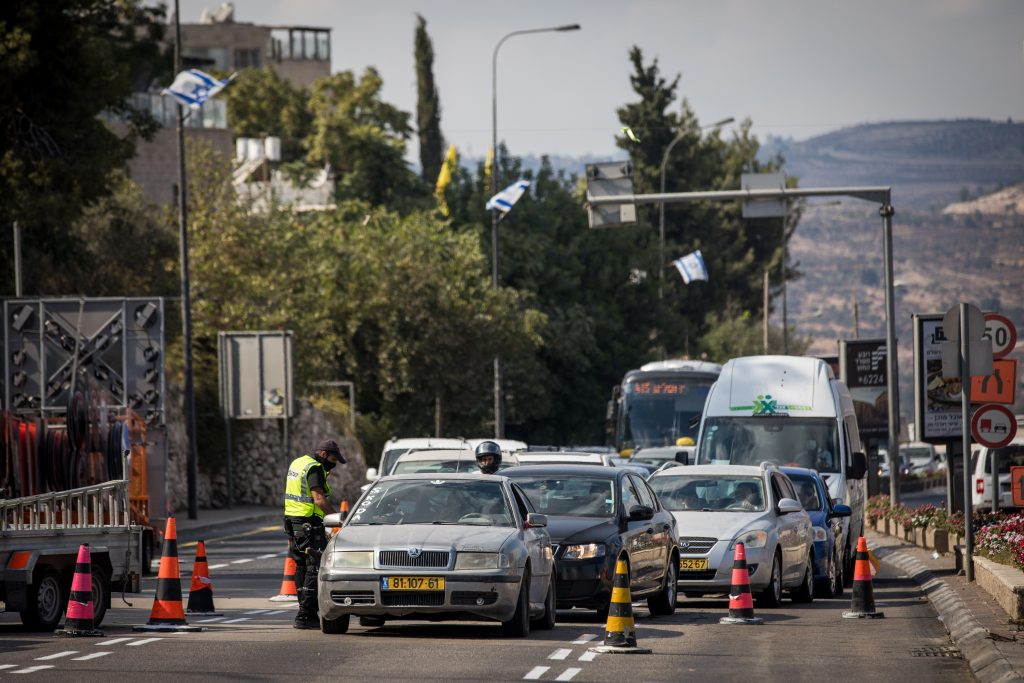 Israel is set to remain under lockdown for at least another two weeks, following the Coronavirus Cabinet meeting Monday evening.

The cabinet is expected to meet again on Thursday, but only make decisions next Monday, as the virus continues to spread with only a slight decrease in the rate of infection.

He said that only after Simchas Torah will the government be able to make an informed decision. “I do not intend to bring up the easing of restrictions nor increasing restrictions until Monday,” the prime minister said.

Blue and White ministers are pushing for some loosening of restrictions on the private sector immediately after Simchas Torah. However, the Health Ministry presented a plan that would only allow a first stage of easements once the reproduction number (R) – the number of people that one infected person will pass on the virus – is reduced to 0.8 and there is an average of 2,000 new patients per day.

The plan presented to the Cabinet by the Health Ministry was prepared in consultation with the National Security Council and a team of internal and external health experts and is multi-tiered.

Between the stages, there would be two weeks to evaluate the impact of the one before.

According to the plan, the school system would take the longest to open up in its entirety and, when it does, it is expected to still contain a hybrid online-in-person learning program.

The plan also relies on a minimum of 30,000 tests being done per day, as health officials have continually recommended as a baseline number.

If any easing does take place by October 18, the country would likely be looking only at phase one, which would allow non-customer facing businesses to operate under the Purple Ribbon outline. Schools for children six and under would also resume, and perhaps the airport would resume outgoing flights – but it is expected only for business travelers.

It would take at least another two weeks for children through grade four to return to school and it is only in a final phase – an expected three months or more away – that all children would be back in school. First through fourth graders would only return to school when the number of new daily patients dropped to 1,000 and fifth and up when it fell to 250.

Once the final phase is reached, the traffic light program would be carried out.

Although no final number has been set, it is expected that the final phase would only occur when Israel reports around 400 new patients per day, as was the goal set by coronavirus commissioner Prof. Ronni Gamzu many months prior.

In a report presented Monday by the Coronavirus National Information and Knowledge Center, which is overseen by the IDF, it said that Israel continues to have the highest number of new cases per day per capita in the world.

The Finance Ministry said at the meeting that if the lockdown is extended in its present form after Simchas Torah, it will cost the economy around NIS 6 billion every two weeks.

Ahead of the meeting, Economy Minister Amir Peretz called on Netanyahu to “come down from the tree” and listen to health experts, who he said do not believe as full a lockdown as now is necessary.

Meanwhile, Environmental Protection Minister Gila Gamliel found herself in hot water after violating coronavirus lockdown restrictions by traveling some 150 kilometers from her Tel Aviv home to Teveria for Yom Kippur.

Science and Technology Minister Yizhar Shay became the first minister to call upon Gamliel to resign on Tuesday.

Gamliel tested positive for the virus after spending Yom Kippur in Teveria. She prayed at a beit knesset in the city run by her father-in-law, where some 20 people were diagnosed with the virus in recent days.

Gamliel reportedly earlier attempted to hide the violation from the Health Ministry during her epidemiological investigation, avoiding the ministry for hours and then saying that she caught the virus from her driver.

Gamliel has acknowledged wrongdoing and said she would pay the NIS 5,000 fine, but she is not expected to resign or be fired by Netanyahu.

“If things are as they are, they are very problematic,” Shay told Kan Radio. “I expect the minister to take responsibility for herself and quit and not wait for someone to tell her what to do.”

Shay praised Yesh Atid MK Mickey Levy for taking responsibility and leaving the Knesset Coronavirus Committee over his own violations.

Levy admitted violating directives by visiting the home of his son, staying there for over an hour and eating there. He lives a seven-minute drive from his son in Mevaseret Zion, farther than the kilometer permitted by law.

But Levy told Army Radio on Tuesday that what Gamliel did is much worse than what he did and should not be compared.