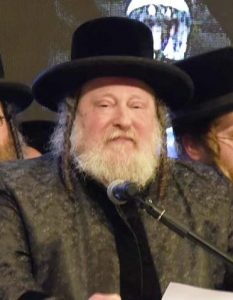 The olam hachassidus was thrown into mourning Sunday night with the petirah of Harav Mordechai Yissocher Ber Leifer, the Pittsburgher Rebbe, zy”a. The Rebbe, who had contracted COVID, had been hospitalized since 25 Av, and his condition deteriorated over the past few weeks. He was 64 years old.

The Rebbe was born in 1956 in Newark, NJ, where his father, Harav Avraham Abba Leifer, zy”a, the second Pittsburgher Rebbe, had a chassidishe yeshiva. His grandfather, Harav Yosef, known as the Tzidkas Yosef, a descendant of Harav Mordechai of Nadvorna, founded the Pittsburgher chassidus in 1924. Rav Avraham Abba became rebbe in 1966, and moved to Eretz Yisrael and settled in Ashdod in 1970.

When Rav Avraham Abba opened a yeshiva in Ashdod in 1982, he requested that his son join him. Over the next few years, he helped open several more Torah institutions. When his father was niftar on 10 Teves, 5750, Harav Mordechai Yissocher Ber acceded to become rebbe, and expanded the chassidus. His mosdos include a cheder with over 300 students, two yeshivos, and several kollelim. In addition, he was active in bringing many non-affiliated Yidden back to Yiddishkeit.

The rebbe was the son-in-law of Harav Rabbi Yitzchak Eizik Liebes, zt”l, who served as the av beis din of the Iggud Harabbanim.

The levayah is scheduled for Monday in Ashdod.