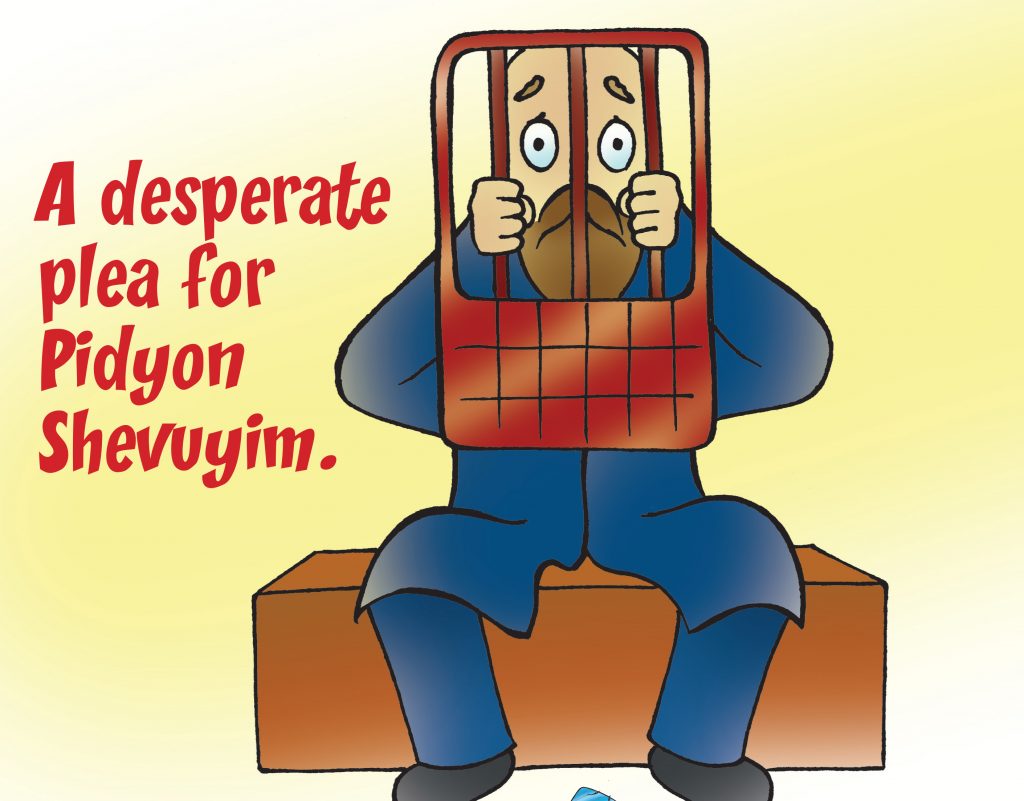 As he did each year in the days before each Yom Tov, the chazzan of the small shtetl was trying his hardest to come up with a new niggun to sing during Shacharis, but the racket being made by the children playing just outside his window was making it impossible to concentrate. After his pleas to the children to play elsewhere were ignored, he came up with a different solution.

“Children,” he shouted after poking his head out of the window, “there is this huge fish at the riverbank, larger than one you have ever seen before.”

Much to his relief, the children fell for it — hook, line and sinker — and scampered off down the muddy road in the direction of the river. As he returned to focus on his niggun, he started to feel a little guilty about telling an untruth — especially to children.

A chazzan ought to be a role model,he berated himself.

Minutes later, he was startled to see the village tailor and watchmaker rushing past his window.

“Where are you running?” he asked them.

“There is this monstrous fish at the river,” the tailor panted, “they say it is the size of 10 men.”

Chuckling at the thought that the story had started sprouting wings, the chazzan went back to his niggun.

Barely five minutes later, he saw Rosh HaKahal, who was also the richest man in the village, walking quickly down the road, accompanied by two of his sons.

“There is this incredible, huge creature at the river,” the Rosh HaKahal loudly declared as he strode by. “They say that it is the size of a house.”

Could it be that there is some truth in all this after all? The chazzan wondered. Don’t be silly, you were the one who started this whole charade, he promptly berated himself.

He was finally making some headway on the niggun when he saw two of the village’s most respected members, the shochet, accompanied by the elderly gabbai of the shul, making their way down the road.

“Come to the river,” the old man urged him, clutching his walking stick, and walking as fast as his frail legs would allow him. “They say there is a fish there that may be the Livyasan.”

The chazzan grabbed his hat and joined them.

You never know! He told himself.

This story, which is likely allegorical, highlights the reality that when something is said often enough by enough people — even those who should certainly know better will start to believe it.

One of most striking — and damaging — examples of this phenomenon takes place within our own community every hour of the day. It revolves around what is perhaps the two most abused and distorted words in Lashon HaKodesh, namely: L’tzorech parnassah.

As a requisite to getting their children admitted into local mosdos, many parents who own smartphones are required to sign a form affirming that their device has a filter, and that they received permission from their Rav to use it “l’tzorech parnassah.”

Yet what are these words supposed to mean?

One anecdote that made the rounds last winter tells of a yungerman seen reading Parashas HaMann from his Smartphone while pacing back in forth in his local shul on Tuesday of Parashas Beshalach.

“I signed that I would use it l’tzorech parnassah,” he explained.

What follows will be unpopular with some readers, but it is the unvarnished, painful truth. It is time for all of us to stop deluding ourselves and acknowledge the following four realities:

Firstly, the “heter” l’tzorech parnassah for using a smartphone and/or social media only applies when it actually plays a vital role in his earning a livelihood, and not a matter of convenience.

Secondly, there is ample evidence that a majority — and perhaps even the overwhelming majority — of people who currently own these devices, especially those under 40, don’t really “need” them for parnassah purposes, and would in all probability not see any decrease in their yearly income if they stop using them. Contrary to what some would like to think, in most vocations, WhatsApp is a convenient method of communication, but hardly a “must-have” business tool. Some may express annoyance, but few, if any, customers will actually shop elsewhere if WhatsApp stops being an option.

In fact, many business owners are increasingly discovering that smartphones and, especially social media groups, are actually a disrupting influence on their ability to get things done. Individuals who swapped their smartphones for a tablet, laptop, or desktop and started communicating using old fashioned email or regular text messages sent via a flip phone, relate that this change increased their work output and enriched their lives.

Thirdly, even among those who are really convinced that these devices have a pivotal role in their parnassah, very few of them really use it only for business purposes. This fact is self-evident — all one has to do is watch smartphone users in action for a little while.

Fourth, the rampant misuse of these devices — even those with supposedly strong filters — and especially social media platforms such as WhatsApp, has taken a devastating toll on the relationship our youth has with the Ribbono shel Olam. One can close their eyes tightly and bury their heads in the sand, but one cannot deny this reality.

In a recent conversation, one prominent Dayan — who is regularly consulted by dozens of yungeleit in their 20s and 30s — told me that he doesn’t need to wait until a yungerman pulls out his phone to see what kind of device he has, or ask him about it. After speaking to a yungerman for only a few minutes, he knows whether he uses a smartphone.

“I can see right away what type of phone he has; a smartphone changes a yungerman; he becomes a different person,” the Dayan told me.

Civilized society has recognized age limits for certain actions. One must be a certain age in order to drive a car, vote in an election, or purchase alcohol.

If there is indeed a certain percentage of vocations within our community that require smartphone use — then perhaps we should at least limit those vocations and smartphone usage to individuals over 40 years old. While they are certainly not immune to misusing technology and being adversely affected by social media, they are at least more likely to use these devices in a responsible way.

In the meanwhile, my suggestion to all smartphone users under 40 reading this article (and the over 40 crowd should certainly consider it as well) is a simple one: Try abstaining from using a smartphone and social media for six months. Like all addictions, weaning oneself off these devices will be very hard in the beginning — but as you will discover, very well worth the effort.