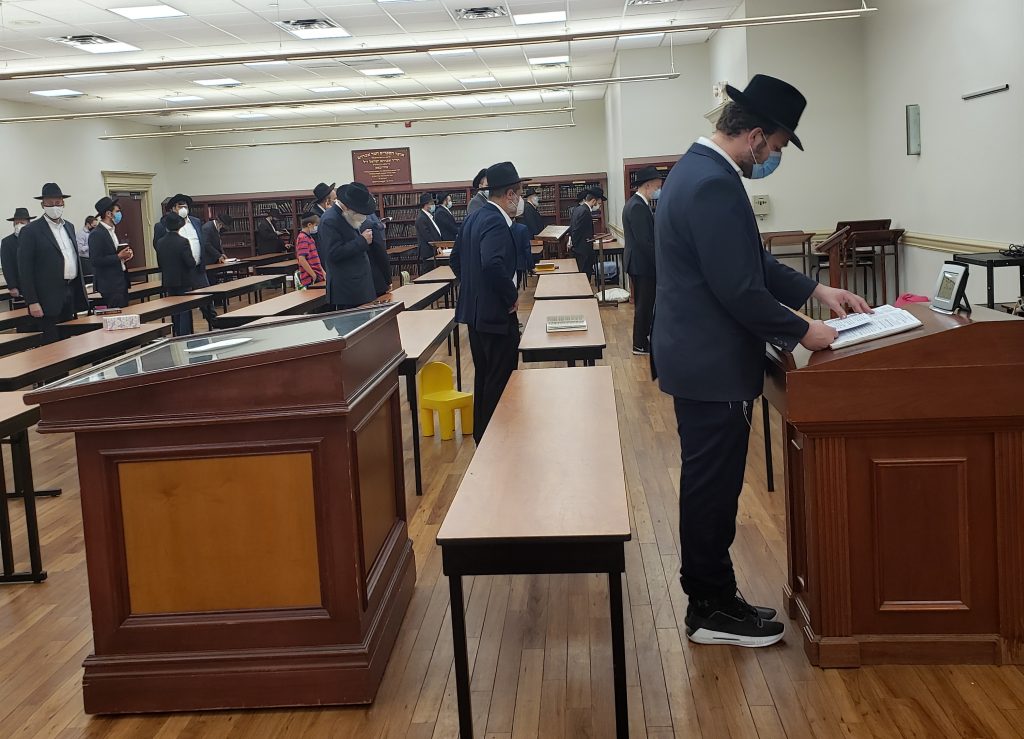 In Lakewood, as in many large Jewish communities, the ongoing COVID pandemic has led many to seek creative means of providing safe options for Torah and tefillah to continue for all in a responsible and medically sound manner.

Several months ago, as COVID receded from Lakewood and from the state in general, shuls began to re- open their doors. Yet, for many elderly and medically vulnerable people, or those who felt an extra dose of caution was prudent, scattered outdoor and social-distancing minyanim remained a better option.

Seeing continued demand, but a gap in organization that made it difficult for some seeking a safer option for davening, Rabbi Tzvi Black built an email list aimed at matching people with the minyan that best suited their needs.

“I didn’t start out with a plan, but I assumed there were other people like me who wanted a place they felt comfortable davening in and that they might not know where to find them. I started advertising and ended up becoming a clearinghouse for COVID minyanim,” said Rabbi Black.

The network includes some 22 minyanim in all corners of Lakewood and includes several hundreds of people. Most are outdoors, many in tents, which have continued since they began during the earlier stages of the pandemic. Some take place in spacious indoor locations and a few, such as those at Khal Nachlas Yaakov on Central Avenue and Sons of Israel (the Old Shul), are hosted by existing kehillos.

With Rosh Hashanah and Yom Kippur rapidly approaching amid a significant uptick in COVID cases in Lakewood, demand has not decreased and many of what started as makeshift minyanim are lining up baalei tefillah for the Yamim Nora’im.

“Two of our locations are already filled up,” Rabbi Black said early in the week before Rosh Hashanah. “I hope that people don’t wake up at the last minute so that we can find a place for everybody who wants one.”

Keren Yeshuah v’Yisroel, the name given to Rabbi Black’s network, has arranged for Lakewood Civilian Safety Watch members to make rounds to minyanim in the event of any emergency situations.

Rabbi Black said that while he did not intend to start an organization, the task ended up on his shoulders.

“It’s a little scary to think of how many people are depending on me, but b’makom sh’eino ish, I’m doing the best I can,” he said.

As the numbers of infections have continued to tick up, many of Lakewood’s yeshivos and schools have found themselves sending exposed or infected students home to quarantine over the past weeks, though not in very high numbers.

Starting at the beginning of the summer when schools began to open their doors and increasingly, as they made plans to begin the new academic year, many institutions formulated detailed plans of how to deal with such eventualities and even more so — how to minimize their occurrence and the effect they would have on others.

“We can never do enough, but we have to balance our priorities and we have to be practical,” said Mrs. Suri Robinson of Nachlas Bais Yaakov.

Like many other mosdos that have implemented guidelines to minimize the potential for viral spread, Nachlas Bais Yaakov’s plan essentially makes each class into a self-contained capsule, moving lunch to the classroom, eliminating activities like assemblies, and staggering recess times to allow room in the yard for each class to play a considerable distance away from other classes.

Anytime a girl leaves the classroom at a time when they are likely to come in contact with other students they must wear masks. In an effort to keep masks easily available, each girl was given a necklace her mask can attach to which is worn throughout the day.

At Yeshivah Ketanah, classes are likewise contained in capsules with several measures in place to minimize inter-class mingling. As in most mosdos with carefully constructed guidelines, outsiders are discouraged from entering the building. Upsherins have been limited to the boy and his parents, who are required to wear masks while they are there.

As in many schools, any child who has possible COVID symptoms, has been exposed to a COVID positive person, or returned from a state on New Jersey’s quarantine list, must stay home from school for 10-14 days. As of early this week, Yeshivah Ketanah’s administrator, Rabbi Osher Lederer, said that only a small number of boys have been forced to remain at home, but that they were still keeping up with their classes via a telephone.

An additional step these and many other mosdos have taken is to keep windows open when possible and to regularly change filters in ventilation systems.

Nachlas Bais Yaakov introduced its protocols to parents via a conference call held with parents at the beginning of the year. Rabbi Lederer sent several recorded messages to his school’s parent body stressing the importance of compliance, particularly with keeping children who could pose a risk at home for the prescribed period of time.

Another innovation that Yeshivah Ketanah introduced was to place blue tape around each student’s desk, asking Rebbeim to make all possible efforts that they should not enter the box and that the child should remain inside of it.

On buses, masks are required and siblings are encouraged to sit together and temperature checks are made before students enter the building.

“It’s harder to walk around with a mask, but everyone got used to it and the show went on,” said Mrs. Robinson. “Generally speaking, from the feedback I’ve gotten, parents appreciate the precautions we’re taking and are very happy just to have their children back in school.”

Mrs. Robinson did say that not being able to hold assemblies has made it more difficult for the principals to communicate messages to the entire student body, but that they had set up a phone line with regular messages, stories, divrei chizuk, and the like.

When asked about the effect the guidelines his school had put in place have had on chinuch itself, Rabbi Lederer offered a unique viewpoint.

“This is chinuch,” he said. “Part of chinuch is learning to take responsibility in life; it’s about teaching kids not to laugh in the face of a mageifah and to realize that their actions can have an effect on other people.”