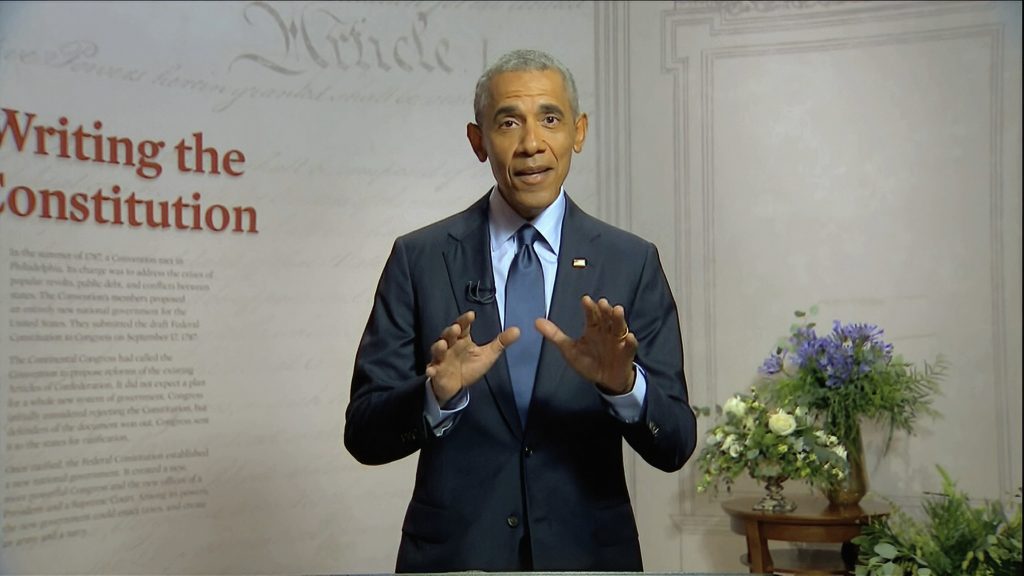 Former President Barack Obama on Wednesday assailed his successor, Donald Trump, as unfit for the office he occupies and argued that voting for his former No. 2, Joe Biden, was necessary to ensure the survival of American democracy. Then delegates broke a historic barrier by nominating Kamala Harris as Joe Biden’s running mate and the first Black woman on a national political ticket.

Obama, himself a barrier breaker as the nation’s first Black president, pleaded with voters to “embrace your own responsibility as citizens – to make sure that the basic tenets of our democracy endure. Because that’s what is at stake right now. Our democracy.”

The third night of the Democrats’ four-day convention stood out for its urgent focus on voting and the party’s commitment to progressive values on issues like gun violence and climate change. Democrats targeted Trump’s policies as dangerous, casting him as cruel in his treatment of immigrants, disinterested in the nation’s climate crisis and over his head on virtually all of the nation’s most pressing challenges.

At the same time, high-profile party figures spoke directly to women and all voters of color, whose energy this fall could ultimately decide the outcome.

Harris, a 55-year-old California senator and daughter of Jamaican and Indian immigrants, addressed race and equality in a personal way Biden cannot when he formally accepts his party’s presidential nomination on Thursday.

“There is no vaccine for racism. We have got to do the work,” Harris said, her words emphatic though she was speaking in a largely empty arena near Biden’s Delaware home.

“We’ve got to do the work to fulfill the promise of equal justice under law,” she added. “None of us are free until all of us our free.”

Just 76 days before the election, Biden faces the difficult task of energizing each of the disparate factions that make up the modern-day Democratic Party – a coalition that spans generation, race and ideology. And this fall voters must deal with concerns over the COVID-19 pandemic that has created health risks for those who want to vote in person.

Biden leads many polls, but his supporters report being motivated far more by antipathy toward Trump than genuine excitement about Biden, a 77-year-old white man who has spent nearly a half century in politics.

Obama confidants say that the former president’s support for Biden is unequivocal, but he does worry about enthusiasm among younger voters, particularly younger voters of color. Democrats concede that one of the reasons Trump won the presidency in 2016 was because those voters didn’t show up in the same large numbers as when Obama was on the ballot.

Beyond the carefully scripted confines of the virtual convention, there were modest signs of tension between the moderate and progressive wings of Biden’s Democratic Party.

In particular, some progressives complained that pro-Biden Republicans such as Ohio Gov. John Kasich have been featured more prominently than the party’s younger progressive stars like New York Rep. Alexandria Ocasio-Cortez.

Climate activists also complained that the party appeared ready to drop a provision in the platform that calls for an end to fossil fuel industry subsidies and tax breaks.

Sen. Elizabeth Warren, a favorite of progressives for demanding bold change, only spoke for around five minutes.

It remains to be seen whether the unconventional convention will give Biden the momentum he’s looking for.

Preliminary estimates show that viewership for the first night of the virtual convention was down compared with the opening of Hillary Clinton’s onsite nominating party four years ago.