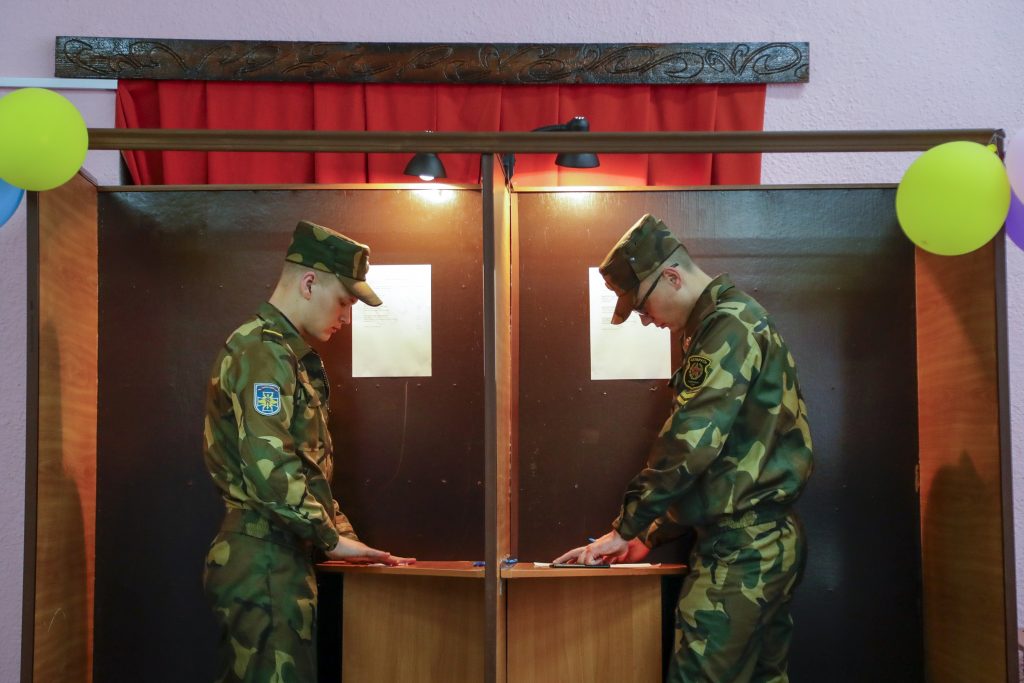 Belarusians are voting on whether to grant their authoritarian president a sixth term in office, following a campaign marked by unusually strong demonstrations by opposition supporters frustrated with the country’s stumbling economy, political repression and weak response to the coronavirus pandemic.

Incumbent Alexander Lukashenko, in office for 26 years, has made it clear he won’t hesitate to quash any attempt by his opponents to protest the results of Sunday’s election.

But some voters were defiant.

“There is no more fear. Belarusians will not be silent and will protest loudly,” 24-year-old Tatiana Protasevich said at a Minsk polling place Sunday.

The head of staff for main opposition candidate Sviatlana Tsikhanouskaya was detained late Saturday for allegedly participating in authorized protests and is likely to be in jail until at least Monday. Tsikhanouskaya herself reportedly was so concerned about her own security that she left her residence to spend the night elsewhere.

Tsikhanouskaya, the wife of a jailed opposition blogger, became the main opposition candidate after two other prominent aspirants were denied places on the ballot. One of them was jailed and the other, former ambassador to the United States Valery Tsepkalo, fled the country fearing imminent arrest.

As polls opened on Sunday, the country’s central elections commission said more than 40% of the electorate had cast ballots in early voting, a figure likely to heighten concerns about the results’ legitimacy because of the potential for manipulation.

“For five nights nobody has guarded the ballot boxes, which gives the authorities a wide field for manoeuvrings,” said Veronika Tsepkalo, the wife of Valery Tsepkalo and member of Tsikhanouskaya’s campaign headquarters.

The Organization for Security and Cooperation in Europe, whose assessments of elections are widely regarded as authoritative, was not invited to send an observer mission.

Tsikhanouskaya had crisscrossed the country, tapping public frustration with Lukashenko’s swaggering response to the pandemic and the country’s stagnating Soviet-style economy. One of her rallies in the capital Minsk attracted an estimated 60,000 people, an enormous turnout in the country where dissent is routinely suppressed.

Belarus, a country of 9.5 million people, has reported more than 68,500 confirmed coronavirus cases and 580 deaths in the pandemic. Critics have accused the authorities of manipulating the figures to downplay the death toll.

Lukashenko announced last month that he had been infected with the virus but had no COVID-19 symptoms and recovered quickly, allegedly thanks to doing sports. He defended his handling of the outbreak, saying that a lockdown would have doomed the nation’s weakened economy.

Belarus has sustained a severe economic blow after its leading exports customer, Russia, went into a pandemic-induced recession and other foreign markets shrank. Before the coronavirus, the country’s state-controlled economy already had been stalled for years, stoking public frustration.

For some voters, Lukashenko’s long and hardline rule is in his favor.

“He is an experienced politician, not a housewife who appeared out of nowhere and muddied the waters,” pensioner Igor Rozhov said Sunday. “We need a strong hand that will not allow riots and color revolutions,” a reference to uprisings that forced out leaders in Georgia and Ukraine.

Political observers say the election campaign exposed divisions among the Belarusian elite as some of its members entered politics for the first time.

Belarusian authorities last week arrested 33 Russian military contractors and charged them with plans to stage “mass riots.” The political opposition and many independent observers saw the arrests as an attempt to shore up the incumbent’s sagging public support.

The arrest of the Russians marked an unprecedented spike in tensions between Belarus and Russia, which often have acrimonious disputes despite their close ties.

When Russia and Belarus signed a union agreement in 1996, Lukashenko aspired to use it as a vehicle to eventually lead a unified state as the successor to Russia’s ailing president, Boris Yeltsin. The tables turned after Vladimir Putin became Russian president in 2000, and the Belarusian leader began resisting what he saw as a Kremlin push for control over Belarus.