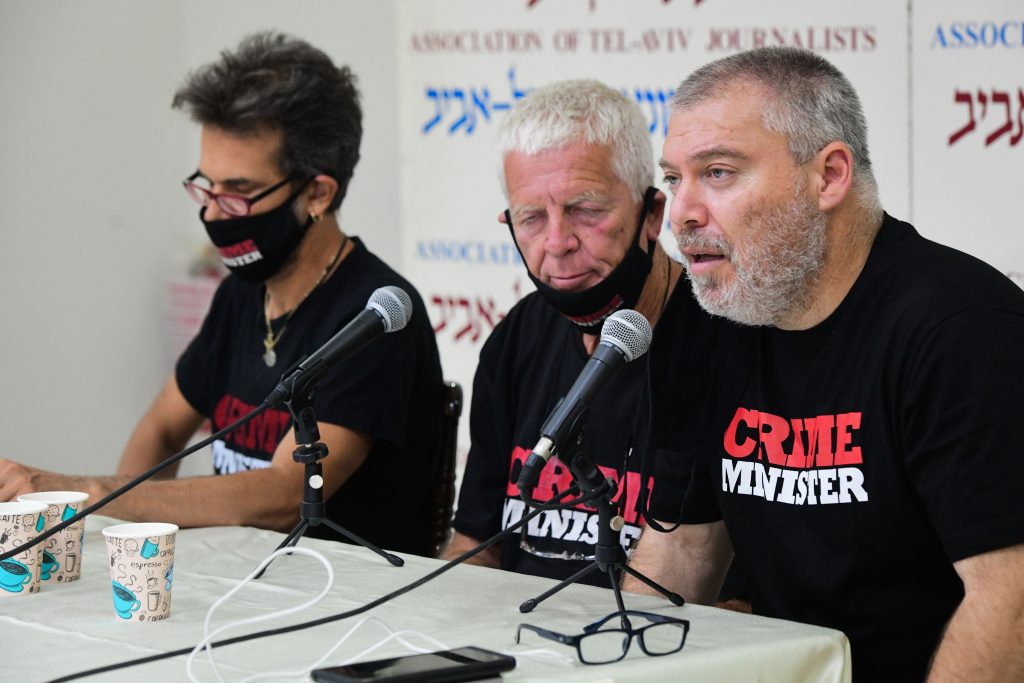 Over 1,000 people have gathered to protest against the Israeli Prime Minister Binyamin Netanyahu‏‏ outside his residence in Yerushalayim, according to media reports on Thursday night.

Police were said to be bracing in larger numbers for violence after several incidents in the past few days involving both clashes between police and protesters, as well as pro- and anti-Netanyahu groups.

Acting police chief Motti Cohen said Thursday morning that security forces would allow the protests, but would counter “violence in any form, against protesters, civilians and police,” adding: “We will take determined action to the full extent of the law against those who disrupt public order.”

Deputy Superintendent of police in the Yerushalayim district, Shlomi Bachar, told Ynet that “we will also be preparing to secure the demonstrators in a very wide circle to prevent friction between the protests themselves and to prevent acts of violence between civilians.”

Prior to the demonstration, police blocked traffic from Ben Maimon / Gaza streets to Paris Square, and from Paris Square junction to Keren Hayesod, King George and Agron streets. Police forces were deployed in the area of ​​Paris Square and in the streets adjacent to it.

The High Court rejected an appeal from residents of the neighborhood where the PM’s residence is located asking for an 11 p.m. curfew on the event.

Earlier in the day, a Tel Aviv court released to house arrest two people suspected of attacking protesters at a demonstration on Tuesday night, and police arrested three others who are suspected of involvement in the incident.

Judge Anat Yahav accepted the defense’s argument that it was a brawl between the two sides “who had provoked each other,” a Haaretz report said, and not a one-sided attack on anti-government demonstrators, as the latter had claimed.

The two suspects, who were arrested yesterday, will remain in house arrest until Sunday and will be barred from entering Tel Aviv for 15 days. The police said it would not appeal the decision.

Itamar Ben Gvir, a lawyer and far-right activist who is representing the suspects, said at their hearing, “There isn’t an innocent group and a group of thugs here. There was a group of anarchists who shouted ‘Nazis’ and ‘dirty Jews.’” He said the demonstration was conducted illegally.

The “La Familia” organization, which has been accused of involvement in the violence, and its members were expected to make an appearance at the anti-government gathering in Yerushalayim on Thursday night.

A statement from the group quoted by Arutz Shevas said: “Israel’s perpetrators continue to despise any Jewish symbol. We will not remain indifferent and sit quietly with the state crumbling before our eyes. We have no interest in politics, we have interest only in confronting the extremist anarchists who have crossed the border, and we will not give up.”

However, one police official was quoted as saying that La Familia is well known to them, and they are more concerned about the possibility of violence coming from unknown individuals.

Several dozen far-right Netanyahu supporters were reportedly rallying at a site less than a mile from the anti-government protest. Video footage showed them chanting “death to leftists” and attacking cameramen. They also chased after a car that is reportedly carrying Arab passengers.

Several were subsequently arrested, and police are trying to prevent them from marching to the Prime Minister’s Residence, according to The Times of Israel.