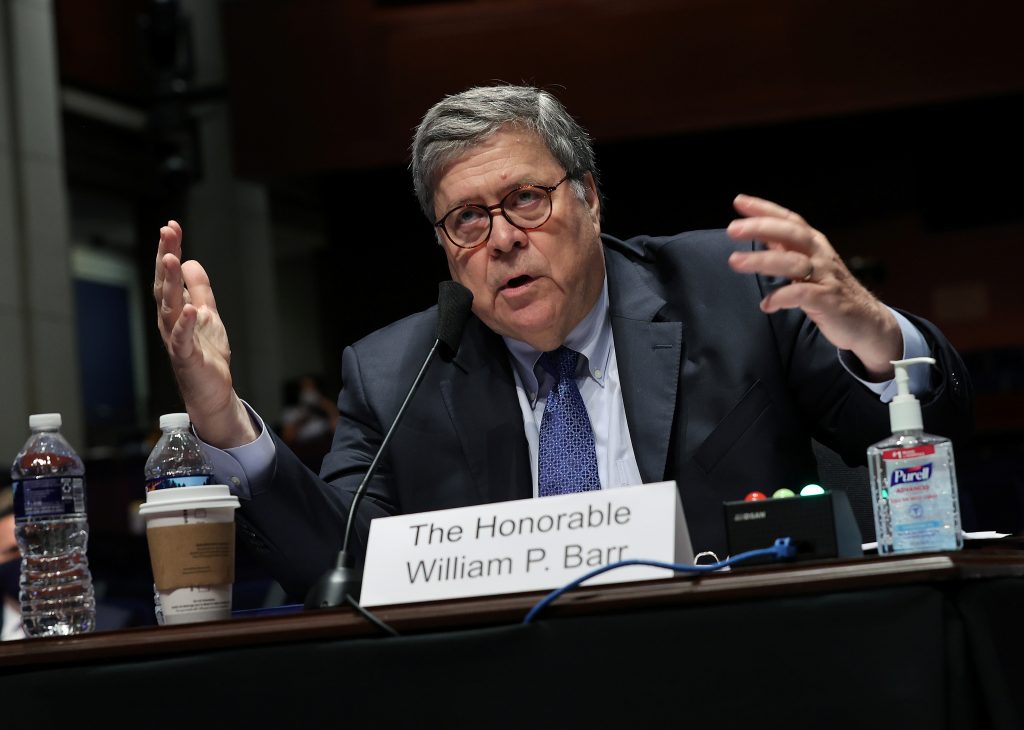 He testified to the House Judiciary Committee for the first time since taking office in February 2019 as the Justice Department faces criticism for sending federal officers to forcibly disperse anti-racism protesters in Portland, Oregon, and Washington, D.C.

Committee Democrats repeatedly interrupted Barr, often running out the clock before he could answer their questions and drawing criticism from Barr’s fellow Republicans, who responded by letting him address the Democrats’ criticism during their own allotted time to ask questions — a tactic that made it easier for Barr to stay on message.

During an exchange about the deployment of federal agents to Portland where they have clashed nightly with anti-racism demonstrators who have also set fires and thrown objects, Barr responded, “We cannot just stand aside and watch the federal courthouse be destroyed.”

Committee Chairman Jerrold Nadler opened the hearing by telling Barr: “Your tenure is marked by a persistent war against the Department’s professional core in an apparent effort to secure favors for the president.”

Barr rejected Nadler’s assertion the deployment of federal agents to U.S. cities was an effort to boost Preident Trump’s re-election campaign. Barr also denied taking actions to help Trump associates, saying they do not deserve special breaks but also should not be treated more harshly than other defendants.

Widespread and mostly peaceful protests against racial bias and police brutality have taken place in the United States since May 25 when George Floyd, a black man, died.

Barr has highlighted the arson and violence at some protests, blaming them primarily on far-left “antifa” elements — an assertion that is heavily disputed — and urging federal prosecutors to bring criminal charges whenever possible.

Committee Republicans — including ranking member Jim Jordan — highlighted the degree to which Democrats did not allow Barr to speak.

“I don’t think we’ve ever had a hearing where the witness wasn’t allowed to respond to points made, questions asked, and attacks made,” Jordan said.

Some Democratic political commentators said the Democrats’ style of questioning had made it easier for Barr to avoid major missteps, instead highlighting scenes of violence at protests that have factored prominently in Trump’s campaign ads.

Preet Bharara, the ex-U.S. Attorney in Manhattan, on Twitter called the hearing “disappointing.”

Under questioning by Representative Sheila Jackson Lee, a Democrat who is black, Barr also dismissed accusations of widespread racial discrimination in policing.

“You indicated that the killing of George Floyd was shocking. I disagree,” Jackson Lee said. “You seem to have a difficult time understanding systemic racism and institutional racism that has plagued so many.”

Barr replied: “I don’t agree that there’s systemic racism in police departments.” Barr also incited Democrats’ fury by saying a report being drafted by federal prosecutor John Durham that is expected to highlight missteps by U.S. intelligence agencies during their 2016 probe into collusion between Trump’s campaign and Russia could be made public before the 2020 presidential election.

In May, Barr sought to drop the criminal charge against former national security adviser Michael Flynn, setting the stage for an ongoing legal battle with the federal judge who was due to sentence Flynn, who pleaded guilty to lying to the FBI.

Barr insisted that Trump “has not attempted to interfere in these decisions.”

Berman later told the committee: “The irregular and unexplained actions by the attorney general raised serious concerns for me.”

The hearing, which lasted about five hours, devolved into bitter snipping over petty issues, such as when to take a break.

“Can we take a five-minute break, Mr. Chairman?” Barr asked. “No,” said Nadler, whose morning arrival was delayed by a car collision.

“I waited an hour for you this morning. I haven’t had lunch,” Barr retorted. “You’re a real class act.”