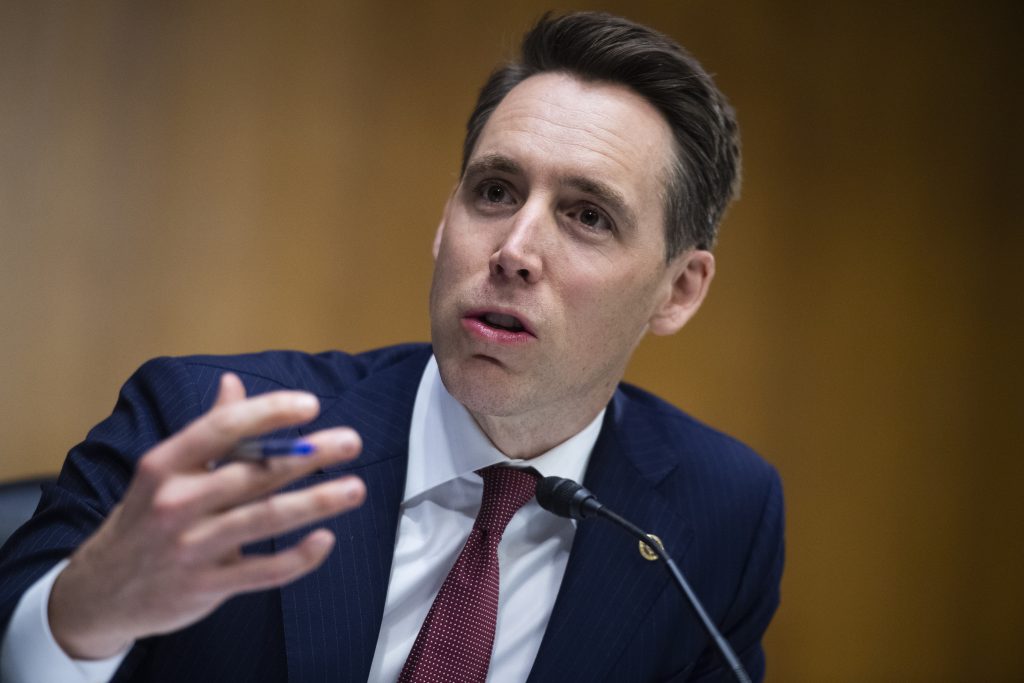 Sen. Josh Hawley, R-Mo., asked the Justice Department on Thursday to investigate the St. Louis city prosecutor overseeing the case against a couple who pointed guns at anti-police protestors last month, the latest move in a battle to cast the incident as either justified self-defense or an act of racial animus.

Hawley’s letter is the latest attack by Republicans against St. Louis Circuit Attorney Kim Gardner, a liberal prosecutor who has sought to reduce incarceration and low-level illegal substance cases and has angered the St. Louis police union with her efforts.

Having one prosecutor investigate another is rare, but Gardner, the city’s first black chief prosecutor, is already the subject of a special prosecutor appointed to investigate her handling of the case of former governor Eric Greitens, a Republican who resigned in 2018 while being investigated for a scandal. In response to the actions against her, Gardner filed a civil rights suit this year against the city of St. Louis and the police union, accusing the city of a “racially-motivated conspiracy.”

Gardner told The Washington Post on Thursday that she is being targeted simply for doing her job as a local prosecutor.

“This is a dog whistle of racist rhetoric and cronyism politics,” she said. “Senator Hawley, who believes in the Constitution, is usurping the will of the voters. I thought the Republican Party was all about states’ rights and local control. What happened?”

At the center of Hawley’s complaint is the case of Mark and Patricia McCloskey, a St. Louis couple who stepped onto their front lawn June 28 and pointed guns at protestors who had marched into their gated community toward the mayor’s home. No shots were fired. Media outlets in St. Louis have reported that police have applied for criminal warrants charging the McCloskeys with weapons violations, but Gardner has declined to discuss the pending case.

“This is an unacceptable abuse of power and threat to the Second Amendment,” Hawley wrote in a letter to U.S. Attorney General William Barr. “I urge you to consider a federal civil rights investigation into the St. Louis Circuit Attorney’s Office to determine whether this investigation and impending prosecution violates this family’s constitutional right.”

Gardner said in an interview with The Washington Post on Wednesday that Hawley was one of a number of Missouri Republicans, including Gov. Mike Parson and state Attorney General Eric Schmitt, in addition to President Donald Trump, who “are all using their political platforms to tell a locally elected prosecutor what to do. That is dangerous.” Trump called the investigation of the McCloskeys a “disgrace,” and Parson said Gardner should be removed from office.

Gardner also has received death threats from across the country after Hawley and others criticized her on Fox News.

“This is a modern-day night ride, and everybody knows it,” Gardner said, referring to the actions of the Ku Klux Klan in the 19th and 20th centuries. “And for a president to participate in it, in the larger context of racism and cronyism, is scary.”

Hawley’s letter said there was “no question under Missouri law that the McCloskeys had the right to own and use their firearms to protect themselves from threatened violence, and that any criminal prosecution for these actions is legally unsound.” He said the investigation is “part of a troubling pattern of politically motivated prosecutorial decisions by the St. Louis Circuit Attorney. . . . The Second Amendment is not a second-class right. No family should face the threat of harassment or malicious prosecution for exercising that right.”

Gardner has felt embattled since she took office in 2017 and set out to restore black residents’ trust in the justice system. She launched a more aggressive diversion program for low-level offenders, stopped prosecuting of low-level marijuana-possession cases, and created an independent unit in her office to investigate police shootings, rather than allow the police to handle them. The city Board of Aldermen, with the police union’s support, killed the initiative. Gardner also created a list of police officers who would no longer be allowed to testify because of prior untruthfulness, a common practice in prosecutors’ offices nationwide, further outraging the St. Louis police officers’ union.

In 2018, Gardner began investigating reports of improper behavior by Gov. Greitens. Gardner said the police, FBI and U.S. attorney’s office all refused to assist the investigation, so she hired a former FBI agent as an investigator and indicted the governor.

When Gardner launched a second investigation into Greitens over campaign finance violations – referred to her by Hawley, the Missouri attorney general at the time – Greitens resigned. But his defense team requested that a special prosecutor be empaneled to investigate Gardner and her investigator, and a civil attorney with close ties to the lead defense attorney was appointed. Police subsequently raided Gardner’s office and removed servers and files; the special prosecutor indicted the investigator in a case that is pending.

In January of this year, Gardner fought back with a federal civil rights lawsuit accusing the city, the police union and the special prosecutor of violating the Ku Klux Klan Act of 1871, which eventually became Section 1985 of the Civil Rights Act. The act allows “for federal judicial enforcement of the Fourteenth Amendment to curb conspiracies of white citizens who sought to interfere with state authorities’ efforts to expand racial justice and equality,” according to Gardner’s suit.

With the suit pending, Republican officials have taken to the airwaves and social media to criticize Gardner. Parson, the governor, said she should be removed from office, and he said he had contacted Trump for his assistance. State Attorney General Eric Schmitt tweeted that Gardner had released people accused of looting “back onto the streets,” though the 36 arrestees were never charged or jailed.

“Senator Hawley’s letter is a toxic combination of hypocrisy and gaslighting,” said Gardner’s attorney Roy Austin, a former top Justice Department official in the Obama administration, “with the clear intent to threaten Circuit Attorney Gardner. As a former state AG, Hawley knows that there is absolutely no federal interest in the discretion that Gardner can exercise in this matter. But the point is not to make a legal argument, but to light a fire under those with a tenuous connection to reality.”