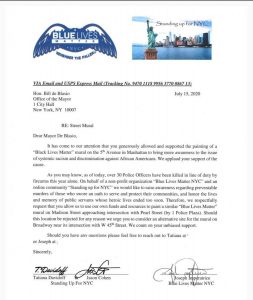 Blue Lives Matter NYC and Standing Up for NYC have submitted a formal request to Mayor Bill De Blasio to have a pro-police mural painted in front 1 Police Plaza, the headquarters of the NYPD.

The organizations applauded the Black Lives Matter mural painted recently using city funds on 5th Avenue in front of Trump Towers as a means of bringing awareness to the racism and discrimination experienced by African-Americans. The letter went on to point out that to date, 30 police officers have been killed in the line of duty across the country this year. In order to raise awareness for this loss of life of those sworn to serve and protect the community, they would like to paint a “Blue Lives Matter” mural at their own expense at Madison Avenue approaching the intersection of Pearl Street, a location near NYPD Headquarters.

“Should this location be rejected for any reason, we urge you to consider an alternate site for the mural on Broadway near its intersection with 45th Street. We count on your unbiased support,” the letter ended.

The Mayor’s office said they are considering the matter.