National For Nation’s Birthday, Trump Slams the Enemy Within
National 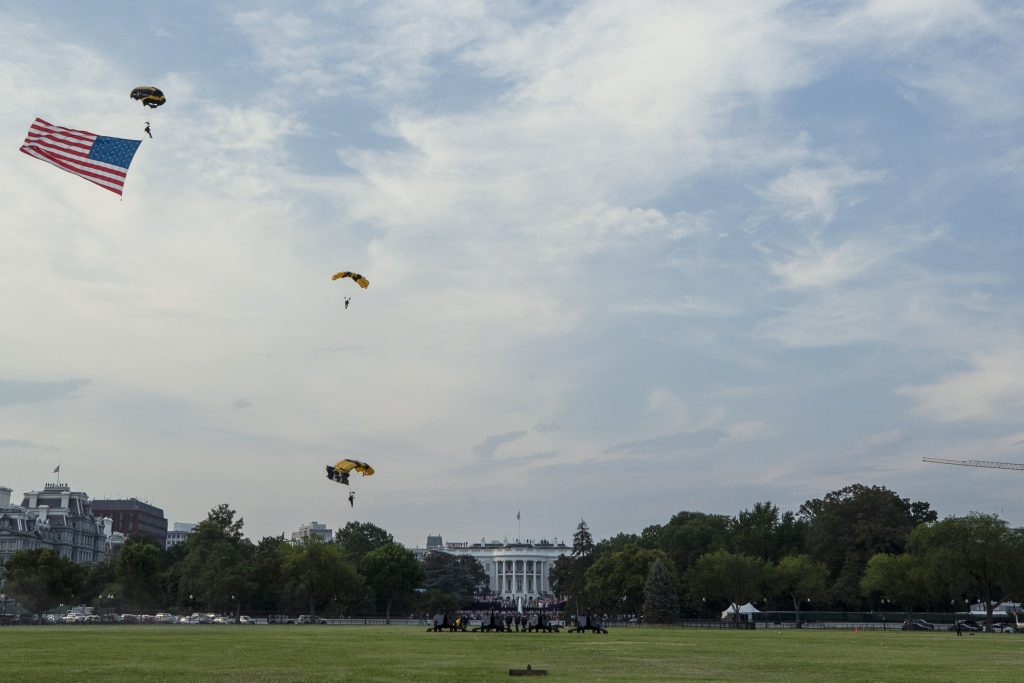 On a day meant for unity and celebration, President Donald Trump vowed to “safeguard our values” from enemies within — leftists, looters, agitators, he said — in a Fourth of July speech packed with all the grievances and combativeness of his political rallies.

Trump watched paratroopers float to the ground in a tribute to America, greeted his audience of front-line medical workers and others central in responding to the coronavirus pandemic, and opened up on those who “slander” him and disrespect the country’s past.

“We are now in the process of defeating the radical left, the anarchists, the agitators, the looters, and the people who, in many instances, have absolutely no clue what they are doing,” he said. “We will never allow an angry mob to tear down our statues, erase our history, indoctrinate our children.

“And we will defend, protect and preserve (the) American way of life, which began in 1492 when Columbus discovered America.”

Even as officials across the country pleaded with Americans to curb their enthusiasm for large Fourth of July crowds, Trump enticed the masses with a “special evening” of tribute and fireworks staged with new U.S. coronavirus infections on the rise.

But the crowds wandering the National Mall for the night’s air show and fireworks were strikingly thinner than the gathering for last year’s jammed celebration on the Mall.

Many who showed up wore masks, unlike those seated close together for Trump’s South Lawn event, and distancing was easy to do for those scattered across the sprawling space.

Carrying on a theme he pounded on a day earlier against the backdrop of the Mount Rushmore monuments, he went after those who have torn down statues or think some of them, particularly those of Confederate figures, should be removed. Support has been growing among Republicans to remove Confederate memorials.

“Our past is not a burden to be cast away,” Trump said.

Outside the event but as close to it as they could get, Pat Lee of Upper Dublin, Pennsylvania, gathered with two friends, one of them a nurse from Fredericksburg, Virginia, and none in a mask.

“POTUS said it would go away,” Lee said of the pandemic, using an acronym for president of the United States. “Masks, I think, are like a hoax.” But she said she wore one inside the Trump International Hotel, where she stayed.

By the World War II Memorial, the National Park Service handed out packets of five white cloth masks to all who wanted them. People were not required to wear them.

Another nurse, Zippy Watt from Riverside, California, came to see the air show and fireworks with her husband and their two daughters, one of whom lives in Washington. They wore matching American flag face masks even when seated together on a park bench.

“We chose to wear a mask to protect ourselves and others,” Watt said. She said her family was divided on Trump but she is “more of a Trump supporter. Being from southern California I see socialist tendencies. I’m tired of paying taxes so others can stay home.”

Pat Lee made the trip from north of Philadelphia after seeing last year’s Mall celebration on TV.

She said the protests over racial injustice that unfolded near her were so threatening that people in her suburban neighborhood took turns staying up all night and those who didn’t own guns stationed bats and shovels in their garages. Her friend from Pennsylvania, who didn’t want to be identified, said she spent more than three hours in line to buy a gun.

“I want people to stop calling us racists,” Lee said. “We’re not racists. Just because you love your country, love the people in your country, doesn’t make you a racist.”

Trump’s guests on the South Lawn were doctors, nurses, law enforcement officers and military members as well as officials from the administration, said Judd Deere, deputy White House press secretary. He said the event was a tribute to the “tremendous courage and spirit” of front-line workers and the public in the pandemic.

In many parts of the country, authorities discouraged mass gatherings for the holiday after days that have seen COVID-19 cases grow at a rate not experienced even during the deadliest phase of the pandemic in the spring.

In New York, once the epicenter, people were urged to avoid crowds and Nathan’s Famous July Fourth hot dog eating contest happened at an undisclosed location without spectators on hand, in advance of the evening’s televised fireworks spectacular over the Empire State Building.

In Philadelphia, mask- and glove-wearing descendants of the signers of the Declaration of Independence participated in a virtual tapping of the famed Liberty Bell on Independence Mall and people were asked to join from afar by clinking glasses, tapping pots or ringing bells.

Trump opened the holiday weekend by traveling to Mount Rushmore in South Dakota for a fireworks display Friday night near the mountain carvings of George Washington, Thomas Jefferson, Abraham Lincoln and Theodore Roosevelt. In stark words, he accused protesters who have pushed for racial justice of engaging in a “merciless campaign to wipe out our history.”

Even as he pushed ahead with celebrations, the shadow of the coronavirus loomed closer to him. Kimberly Guilfoyle, a top fundraiser for the president, tested positive for the virus, Trump’s campaign said late Friday. Guilfoyle tweeted Saturday that she was looking forward to “a speedy recovery.”

In a presidential message Saturday morning on the 244th anniversary of the adoption of the Declaration of Independence, Trump acknowledged that “over the past months, the American spirit has undoubtedly been tested by many challenges.”

Trump’s endorsement of big gatherings at the National Mall and at Mount Rushmore came as many communities decided to scrap fireworks, parades and other holiday traditions in hopes of avoiding yet more surges in infection.

Trump did not dwell on the pandemic in his remarks Saturday evening. Instead, he declared that “our country is in great shape.”

Trump has been aching to see the nation return to normalcy, and has been willing to push the envelope farther than many states and big city mayors are willing to go.