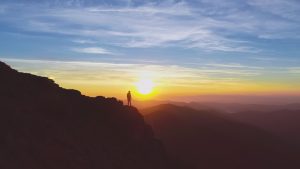 Human nature craves change. We abhor the constant and are eager for something new. The broadest and most extreme version for this is the phenomenon of “revolution.”

While we still seem far away from threats to topple America’s government, what we have witnessed in the past weeks is undoubtedly an expression of revolutionary feelings and actions. Most frightening is that this is not so much an attack on a given regime, but nothing less than a frontal assault on the very foundations of any society. With the “Black Lives Matter” motto as its cover, this movement promotes its true goal: changing the moral and economic standards of society.

It is common knowledge that this has been brewing for a long time. It happens in the educational system. It is fought in courts and, politically, on the streets. This basic tenet of this country is the recognition of time-honored ways of life, which protects traditional religious values and the right to private property. It is not a coincidence that the same people who claim to protect “black lives” give license to anarchy and praise a philosophy that would ideally abolish private property.

What is at the heart of this issue — and how does it affect us, people who adhere to the ideals of the Torah?

All of the positive building blocks of civilization are alluded to in the Aseres Hadibros. It is not by coincidence that the mitzvah of honoring one’s parents directly follows the commandment of shemiras Shabbos. Just as Shabbos marks our recognition of Divine Creation and is the foundation of a Jew’s spirituality, kibbud av va’eim has an equally fundamental role in the stability of our lives in this world. Both commandments demand accepting responsibility. The recognition of a higher authority is an acknowledgement of behavior that sets the human race apart from animals. It means that man is responsible for his decisions in private and public life. It means that moral values are self-evident components for a functioning society.

It is hardly a novel thought and not one that needs a great deal of proof that the continuous breakdown of society has its roots in the breakdown of family life in the Western world. America’s “progressive” movement, in the name of social and economic equality, seeks to throw off any yoke of moral decency and to create an automatic entitlement to all of the nation’s wealth.

Both tendencies have given birth to the wanton destruction we have seen on America’s streets. How many of those who looted stores weeks ago, or those challenging the authority of police, or defacing and toppling statues, would be spending their time on such activities if the responsibility of supporting a family rested on their shoulders?

However, the social disease we are witnessing goes deeper. In search of a society that does not burden them with judgement or responsibility, the progressive cause rejects the very concept of hierarchy. The smokescreen of erasing tributes to those they see as tainted by racism underlies the core of this mad dash. It is a crusade to remove anything and anybody whose values do not wholly conform to those of the nation’s far left. In a land without respected leaders, all citizens are equal animals in the jungle, free to honor no one and to pursue their basest desires.

Human nature itself contains a drive toward self-destruction, which once unleashed can often do more harm than any outside force. Societies too, have this drive. Nearly every revolution has been marked by slaughter of the ruling elites and an obsession with cleansing the public sphere from any image that might threaten the movement’s ideology. In the name of redefining values, Jacobins, Bolsheviks, and many others have pulled down systems of knowledge and order, burning everything in their path rather than taking the time and deliberation to separate good from evil. Never failing to create a living gehinnom in their pursuit of utopia.

While, baruch Hashem, it has not reached the level of violence of the French and Russian revolutions, much of the destruction that has swept American cities in recent weeks share enough elements to give us pause. It furthermore obligates us to reflect on what has led the society around us down such a masochistic road.

Klal Yisrael are firm believers in the inherent value and truth of hierarchy. The cornerstone of the social order is the family unit, governed by parents, upon which all other successive layers of distinction and authority are built.

Challenges to this are not new. Last week, we read of Korach’s rebellion against Moshe Rabbeinu. While the Commentators tell us of the lofty roots of Korach’s error, his words ring all too familiar today. “The whole nation is holy,” he declared, and if so, why then should Moshe and Ahron wield power over the Jewish people? Yet, Korach’s downfall teaches us that his egalitarian vision for a meritocracy is not what the Torah prescribes.

This does not mean that we as Jews reject the value of democracy. There is a reason why, as Winston Churchill put it, “Democracy is the worst form of Government except for all those other forms that have been tried.” It is not that those of inferior education and refinement in society should have an equal say as those with more learning, better character, and a greater financial stake, but because any alternative is too ripe for abuse.

Ideally, in the Torah’s view, when Klal Yisrael is on a high enough spiritual level, the need for governance is minimal, as we saw it in the time of the Shoftim, which for the most part was one of the most peaceful periods in history. In such a system the refinement of character brought through Torah and mitzvos is sufficient to keep public order and subservience to those worthy of leadership.

It is unlikely that we Jews are in a position to save the society around us from the abyss toward which it seems headed. Yet, it is an apt time to take stock of and reinvest in the values that set us apart from the mob of “open-mindedness” before the self-destruction of America goes any further.

A cornerstone of our belief system is the understanding that whatever occurs in the public arena is a message to us. Our reaction to the cynicism of the masses for any authority is the simple unshakable faith in hashgachah pratis, the belief that we are bound to Divine providence, which guides us on all levels of life.

If others yearn for the abolition of boundaries, we yearn for a revelation of Malchus Shamayim, the verity of Divine hierarchy.