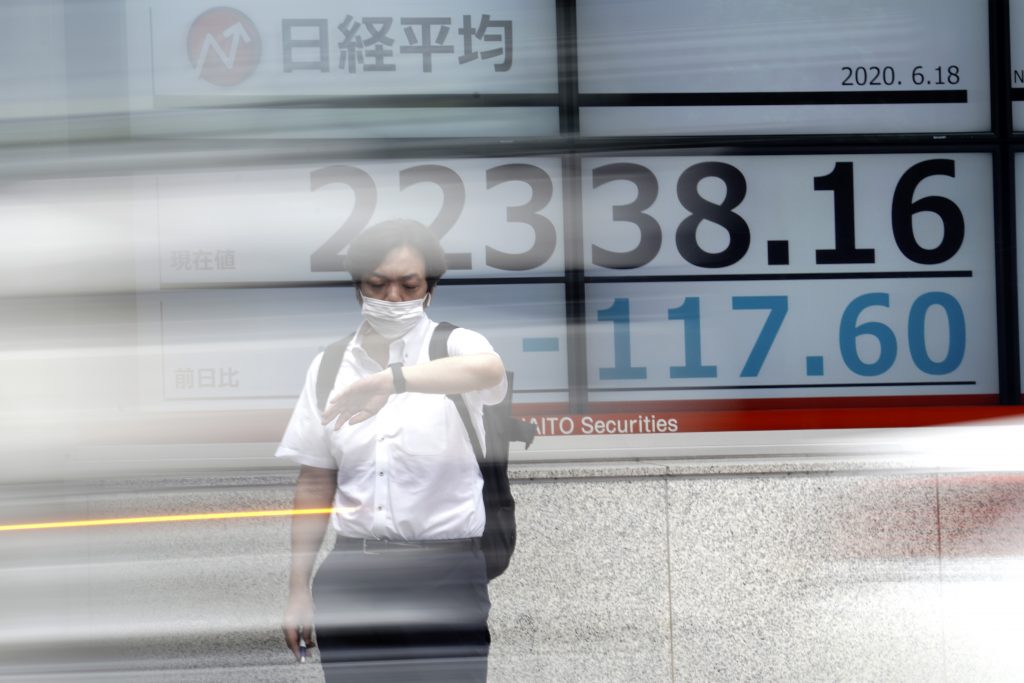 Shares were mostly lower Thursday in Asia after another day of wobbly trading on Wall Street as markets eased off the accelerator following their big rally.

The Shanghai Composite index gained 0.2% to 2,941.64 after the central bank reportedly conducted market operations to inject cash ahead of mid-year settlements.

Sydney’s S&P/ASX 200 skidded 1% to 5,934.80 after the government reported that unemployment surpassed 7% and would have been above 9% if the figure included people laid off and not officially looking for work.

“These are devastating unemployment numbers, they reveal the true pain and hurt that Australians are going through as a result of the coronavirus,” said Australian Treasurer Josh Frydenberg.

“These are not just numbers. These are our friends, family members, workmates and neighbors,” he said.

The jobless data just added to the gloom, said Jeffrey Halley of Oanda. Eratic moves by North Korea and antagonisms between China and India in Kashmir have added to the unease.

“COVED-19 fears in Beijing and parts of the United States and geopolitical concerns in Asia continue to weigh on sentiment,” he said.

Chinese e-commerce firm JD.com’s stock jumped nearly 6% on its debut in Hong Kong on Thursday after the firm raised $3.9 billion in a share sale.

The company’s strong debut comes as a growing number of Chinese technology companies choose to list in Hong Kong amid a deterioration of U.S.-China relations and regulatory pressures.

Chinese gaming firm NetEase also debuted in Hong Kong last week, raising about $2.7 billion with its stock closing up 6% on the first day of trading. NetEase is also listed in New York.

Stocks of smaller companies were weak, which is typical when investors are apprehensive about the economy. The Russell 2000 index of small-cap stocks fell 1.8%.

Markets have been trending upward this week amid hopes that the worst of the recession may have already passed, and a worldwide rally on Tuesday carried the S&P 500 back to within 8% of its record. But rising levels of coronavirus infections in hot spots around the world are also raising concerns that all the improvements could get upended.

Many professional investors have been warning that the S&P 500’s big rally of nearly 40% since late March has been overdone and that volatility is likely the market’s only certainty in upcoming months.

Even if authorities don’t reinstate widespread lockdowns to fight fresh coronavirus outbreaks, the worry is that businesses and consumers could get frightened by new waves of infections and pull back on their spending.

The yield on the 10-year Treasury fell to 0.71% from 0.72% late Wednesday. It tends to move with investors’ expectations for the economy and inflation.

A barrel of U.S. crude oil for delivery in July slipped 33 cents to $37.63 per barrel in electronic trading on the New York Mercantile Exchange. It gave up 42 cents to settle at $37.96 on Wednesday. Brent crude, the international standard, slipped 16 cents to $40.55 per barrel.