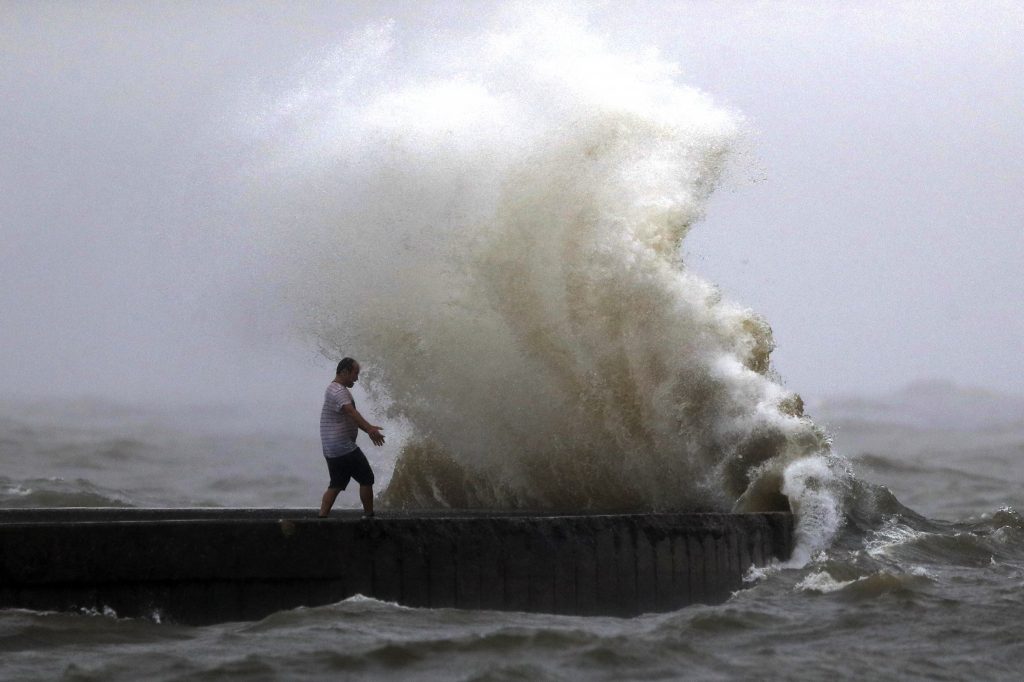 Tropical storm warnings stretched from the coast of central Louisiana to the western Florida panhandle, while storm surge warnings covered the southeast Louisiana coastline to near Biloxi, Miss. Shoreline flooding from the surge and inland flooding from heavy rain were predicted to be the most widespread and serious storm hazards. A five-foot surge had already inundated some coastal areas in southeast Louisiana and Mississippi, while up to six to 10 inches of flooding rain had fallen in parts of the Florida Panhandle through Sunday afternoon. Up to a foot of rain was possible in sections of southeastern Louisiana, including New Orleans, and southern Mississippi.

While wind gusts were generally below damaging levels, they had been clocked in the 40 to 60 mph range along the coast in southeastern Louisiana and Mississippi. Of greater concern were tornadoes. On Saturday, a tornado that spun up on the periphery of the storm caused damage in Orlando, Fla.

While the Gulf Coast was the zone of greatest concern for storm impacts Sunday, Cristobal is predicted to be drawn northward through Arkansas on Monday and then into Missouri, Illinois, and the Great Lakes on Tuesday, and ultimately into Canada by Wednesday, intensifying some as it merges with a mid-latitude storm system.

“Heavy rain will move up the Lower and Mid Mississippi Valley Monday into Tuesday, then across the Upper Mississippi Valley and Northern Plains Tuesday and Tuesday night. Flash flooding, and new and renewed significant river flooding is possible, especially where heavier rainfall occurs over portions of the Gulf Coast through the Mississippi Valley,” the National Hurricane Center wrote.

The National Weather Service forecast office in La Crosse, Wis., tweeted that Cristobal’s remnants could track farther west across Wisconsin than any other post-tropical system on record.

The Hurricane Center was predicting widespread rainfall totals of four to eight inches in southeastern Louisiana and southern Mississippi, with isolated amounts of up to a foot. This zone, under a “high risk” of flash flooding, includes New Orleans.

Numerous flood warnings were in effect for area rivers.

Some of the storm’s heaviest rainfall concentrated in the Florida Panhandle between Tallahassee and Jacksonville on Sunday with rainfall totals of six to 10 inches.

Jacksonsville itself endured flash flooding early in the day on its west side, where up to five to seven inches of rain fell.

Tropical weather systems making landfall often spawn tornadoes, and some were predicted from Cristobal as it comes ashore. A tornado watch was in effect for coastal Alabama and Mississippi through 6 p.m. (5 p.m. central) Sunday for the “threat of a couple of tornadoes with mini supercells.”

On Saturday, a damaging tornado associated with the storm’s outer circulation touched down in the Orlando area. The EF-1 rated twister unleashed winds over 100 mph and damaged buildings and homes southeast of the city, displacing up to 50 residents according to the Orlando Sentinel.

On Tuesday, the storm set a record as the earliest third-named tropical storm or hurricane in any Atlantic hurricane season to date.

When it comes ashore, it will become the second earliest landfalling tropical storm on record in Louisiana.