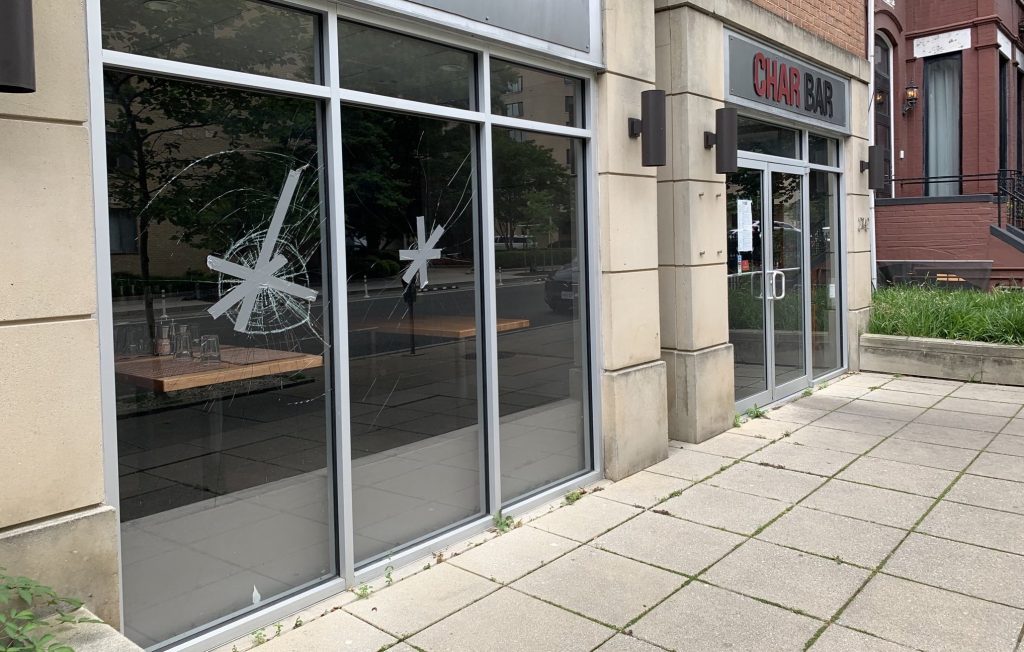 The damage occurred around midnight Sunday night, Char Bar owner Michael Chelst told Hamodia in a phone interview Tuesday. The windows did not shatter, but there are glass shards on the floor inside the restaurant.

Char Bar is known as the go-to eatery for kosher customers in Washington. Orthodox Trump administration officials Jared Kushner and Jason Greenblatt are just two of its renowned patrons. The restaurant is famed for naming its dishes after some of its notable regulars, including Friedlander’s Chicken & Steak Fajitas, for lobbyist Ezra Friedlander; the Diament Club turkey sandwich, for OU Advocacy Executive Director Nathan Diament; and William’s Burger, a veggie patty named for William Daroff, CEO of the Conference of Presidents of Major Jewish Organizations.

Char Bar was one of the many businesses in the nation’s capital, as in cities across the country, that have been vandalized by rioters, amid protests over the death by asphyxiation of George Floyd, a black man in police custody in Minneapolis.

“It’s sad that people are taking out their frustration on those who had nothing to do with the crime they are protesting, and even generally support their cause,” said Chelst.

“But,” he added, “in the course of life, there are a lot of problems out there, and the coronavirus has definitely made much more of an impact than a few rocks.”

Char Bar had already been suffering greatly due to the coronavirus pandemic. The capital does not have many Orthodox Jewish residents, and the restaurant relies heavily on business from tourists, commuters and visiting lobbyists. But with travel shut down and people working remotely, the demand for kosher restaurant food in the capital sank.

Char Bar has been closed since Monday, due to the vandalism, and also out of concern that the employees, who mostly live in Maryland, would not be able to make it home before Washington’s 7 p.m. curfew Monday and Tuesday, Chelst said. The store will reopen on Thursday afternoon.

Chelst said he is unsure whether insurance will cover the cost of fixing the windows.