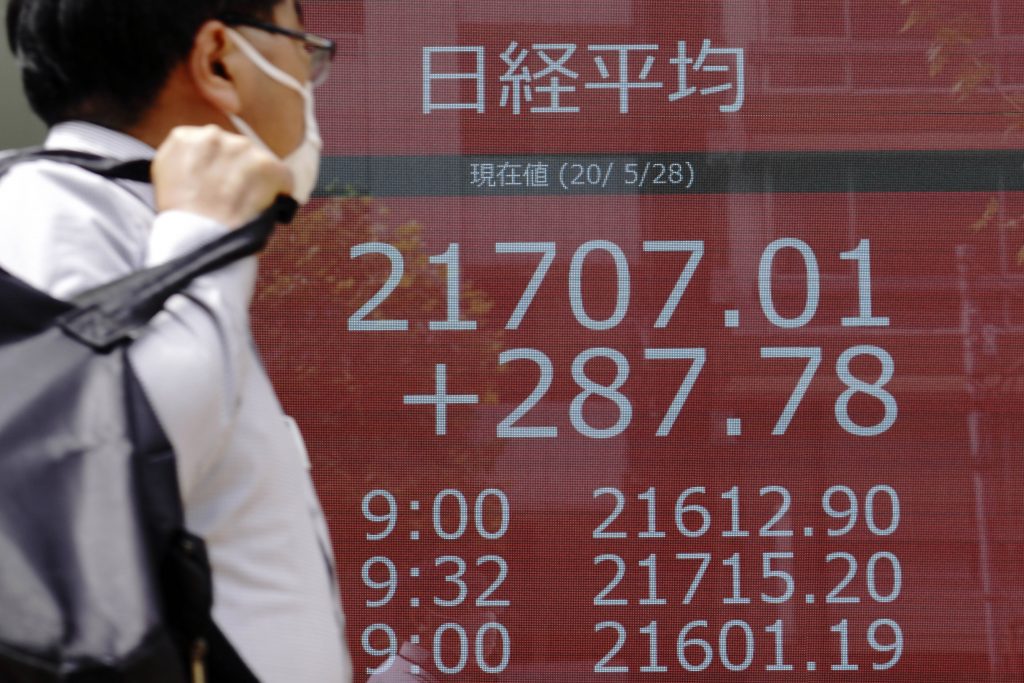 Asian shares are higher as moves to reopen regional economies from shutdowns meant to contain the coronavirus pandemic override concerns about unrest in the U.S.

In Southeast Asia, where shutdowns are beginning to ease, Indonesia’s benchmark jumped 2.4% and Singapore’s surged 1.8%.

The gains also tracked an advance on Wall Street overnight. Investors are balancing cautious optimism about the reopening of businesses shut down because of the pandemic against worries that widespread protests in the U.S. over police brutality could disrupt the economic recovery and widen the outbreak.

Hopes for a quick recovery from the worst global downturn since the 1930s have helped spur buying. But Robert Carnell, regional head of research for the Asia-Pacific region at ING, warned against too much optimism, given the tensions between the U.S. and China, unrest in Hong Kong and the U.S., and uncertainties over prospects for a vaccine or dependable treatments for COVID-19, the illness caused by the new coronavirus.

“How long can markets remain buoyant?” he asked. “The honest answer, and one that may save you five minutes is, ‘I don’t know.’ ”

The protests that have rocked American cities for days have so far not had much impact on financial markets. But the violence and damage to property may hinder the reopening of the economy. Crowds gathering to protest injustice and racism also could touch off more outbreaks.

“The market has been expecting a springtime for economic activity,” said Mike Zigmont, head of trading and research at Harvest Volatility Management. “If these events derail the animal spirits that the markets have been counting on across the country, then I think they will have an impact. But investors are dismissing it as a short-term non-event.”

On Wall Street, the S&P 500 climbed 0.4% to 3,055.73 after wavering between small gains and losses. Banks, companies that depend on consumer spending and communications companies accounted for a big slice of the gains. Health care was the only sector to fall.

The stock market is coming off its second month of solid gains. Stocks have now recouped most of their losses after the initial economic fallout from the coronavirus knocked the market into a breathtaking 34% skid in February and March. The S&P 500 is now down just under 10% from its all-time high in February.

The Federal Reserve and Congress have pledged unprecedented amounts of aid for the economy. That helped spur the market’s move higher from its March lows. Now investors are betting that the worst of the recession has already passed, or will soon, as governments around the country and around the world slowly lift restrictions meant to corral the outbreak.

This week will provide market watchers more insight on the impact that the coronavirus is having on U.S. workers and employers. Payroll processor ADP issues its May survey of hiring by private U.S. companies on Wednesday. The next day, the government releases its weekly tally of applications for unemployment aid. And on Friday, the government reports its May labor market data. Analysts surveyed by FactSet expect the report will show the economy lost 9 million jobs last month.

Benchmark U.S. crude oil added 33 cents to $35.77 a barrel in electronic trading on the New York Mercantile Exchange. It fell 5 cents to $35.44 a barrel Monday. Brent crude oil, the international standard, gained 37 cents to $38.69 a barrel.