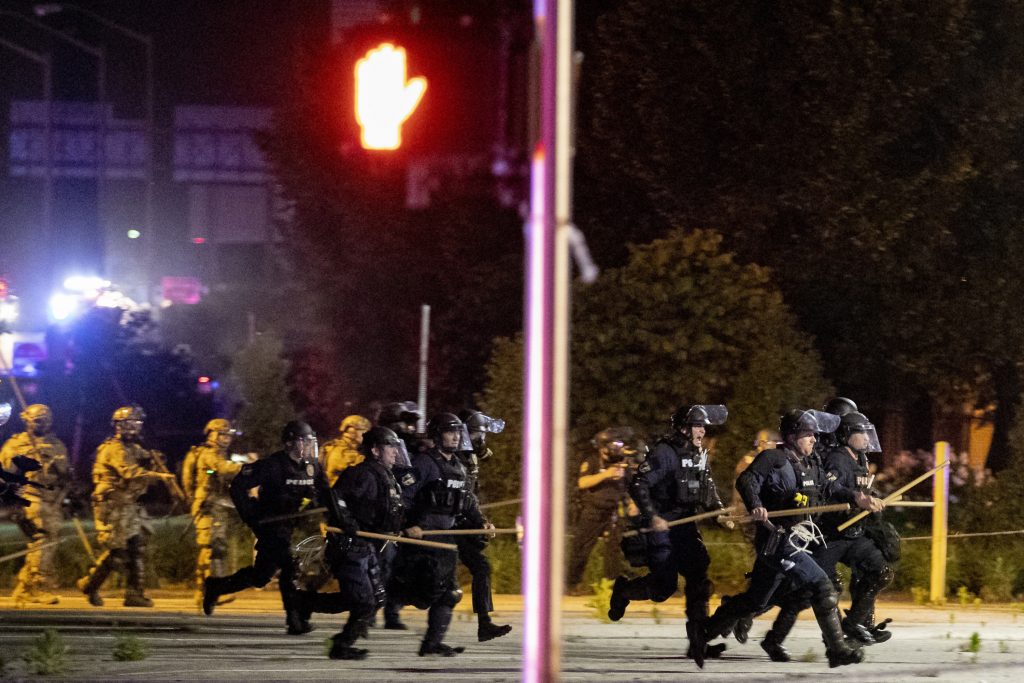 Police officers and National Guard soldiers enforcing a curfew in Louisville killed a man early Monday when they returned fire after someone in a large group fired at them first, the city’s police chief said.

A witness said the group had nothing to do with the protests, and was shocked to see soldiers with machine guns arrive in military vehicles to disrupt their gathering. “Never thought I would experience that here in America,” Kris Smith said.

Police Chief Steve Conrad confirmed the shooting happened around 12:15 a.m. outside a food market on West Broadway, where police and the National Guard had been called to break up a large group of people gathering in defiance of the city’s curfew.

Someone fired a shot at them and both soldiers and officers returned fire, the chief said. It was unclear if the person killed is the one who fired at the law enforcers. Several “persons of interest” were being interviewed, he said.

News outlets showed video taken by someone in a car parked at a gas station. It recorded the sound of bullets being fired as groups of police and national guard soldiers crouched behind cars.

“It has been a very difficult four days for our city. Our officers are working very hard to keep people safe,” Conrad said. “While doing that, we’ve had officers shot at and assaulted. I think it’s very, very clear that many people do not trust the police. That is an issue that we’re going to have to work on and work through for a long time.”

Gov. Andy Beshear said he authorized state police to independently investigate Monday morning’s shooting, which he said happened as police and guardsmen were fired on while dispersing a crowd.

Smith said he was at a restaurant — “just outside having a good time, having drinks, eating barbecue” — when the soldiers arrived.

He heard a loud noise, and a few minutes later gunfire erupted, he said.

“It was like a delayed reaction, like they were looking to try and see where it was coming from, if it was a gunshot, if it was a firework, or whatever,” Smith said. “Then all of a sudden they just started shooting.”

“You could see in their face that they look like they were scared or they were ready for whatever,” he added.

Smith, who is black, said the group had nothing to do with the protests.

Hours after the shooting, WDRB-TV streamed video of dozens of people gathered across the street. Some held signs and many chanted loudly “hands up” and “I can’t breathe” toward officers investigating. The crowd mostly stayed on the sidewalk and out of the roadway as officers lined up nearby.

Last week, before the Kentucky National Guard was mobilized, seven people were wounded when gunshots erupted during a protest in downtown Louisville. Police said none of the seven, who are recovering, were shot by police. They have not announced any arrests.

Protesters have been demanding justice for Breonna Taylor, who was killed in her home in Louisville. The 26-year-old EMT was shot eight times by narcotics detectives who knocked down her front door. No drugs were found in the home.

More than two months after her death, Louisville Mayor Greg Fischer announced last week that police are suspending the use of these no-knock search warrants.