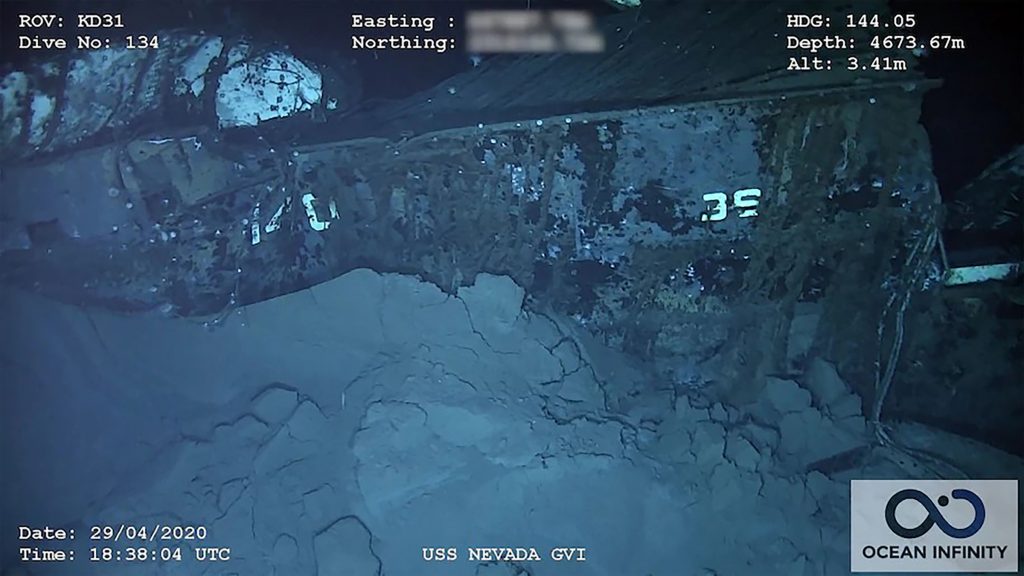 The stricken battleship loomed out of the smoke and wreckage that morning, hurrying past sunken and burning ships, straining to get out of Pearl Harbor and into the open sea.

Past the doomed USS Arizona, which exploded in a fireball, the old ship rushed. It had a hole the size of house in its hull, and its captain was ashore. The frantic crew had chopped the mooring ropes and got the ship underway as Japanese planes swarmed overhead.

The USS Nevada raced to escape the unfolding catastrophe of Dec. 7, 1941. “Out of this pall came a sight so incredible that its viewers could not have been more dumbfounded had it been the legendary Flying Dutchman,” historian Gordon W. Prange wrote.

Earlier this month, undersea explorers announced they had found the wreck of the famous Nevada: It had failed to make good its escape at Pearl Harbor, but it had survived, was repaired and returned to sea to serve out World War II.

It had been found in 15,000 feet of water, purposely sunk by the Navy in 1948 after a career that spanned three decades of service, from World War I to the atomic bomb.

The Nevada had fought on D-Day in 1944 off Normandy and, re-equipped with guns from the shattered Arizona and USS Oklahoma, fought again at the battles of Iwo Jima and Okinawa in the Pacific. After the war, it had been painted orange and used as a test ship at the Bikini Atoll atomic bomb detonations in 1946.

The Nevada survived again, but in 1948, the vessel, possibly still radioactive, was sunk by naval guns, explosives and torpedoes 65 miles southwest of Pearl Harbor, said maritime archaeologist James P. Delgado, of SEARCH Inc., one of two firms that found the wreck in April.

It took the Navy 4½ days to hammer the Nevada to the bottom. Afterward, a funeral, with chaplain and crew, was held on the USS Iowa over the site where the ship had gone down, Delgado said.

Delgado, former head of the Maritime Heritage Program at the National Oceanic and Atmospheric Administration, had studied iconic ship wrecks around the world and knew roughly where the Nevada was. (The Nevada’s band was famously playing “The Star Spangled Banner” on deck on Dec. 7 as the attack began. The band hurried through the piece and ran to battle stations.)

He had wanted to search for the wreck because “ultimately, finding where most of these ships lie and looking at them again is a reminder of the past,” he said. “It connects this, and future generations with those stories in a powerful way. … For many of us who are archaeologists, we’ve always known that the greatest museum we have is at the bottom of the sea.”

Delgado said the project started “with a chance phone call” with Ocean Infinity, a marine survey and robotics company that had found other famous wrecks and happened to have a search vessel stationed near Honolulu, Delgado said. The two firms were planning to work together, and Ocean Infinity agreed to have its ship, the Pacific Constructor, look for the Nevada, he said.

Ocean Infinity said the ship had been working commercial projects in the Pacific since early this year and because of the pandemic, had stayed at sea. “They said, ‘Let’s just go do this,'” Delgado said.

“We drew a box that was 10 by 10 miles and said ‘that’s where to go,'” he said. The Pacific Constructor went to the site and searched with underwater robots. Delgado, based in Jacksonville, Florida, followed along from his computer and provided historical and archaeological guidance.

“Nobody got paid for this,” he said. “We all did this because we felt it was the right thing to do at this time.”

The Nevada, built in Quincy, Massachusetts, and launched in 1914, had 36 painted on its bow and stern. It had guarded convoys during World War I, lost several crewmen to the 1918 flu pandemic, and helped escort the ship carrying President Woodrow Wilson to France to negotiate the Treaty of Versailles.

On the morning of Dec. 7, 1941, the Nevada was moored by itself at the end of a line of ships tied up two-by-two at Ford Island in the middle of Pearl Harbor.

The enemy arrived as the Nevada band played, and the six Patten brothers – Gilbert, Marvin, Bick, Allen, Ray and Bruce, all from Odebolt, Iowa – were stationed in the engine room, according to historian Craig Nelson. They were talking when the ship started to shake, as if in an earthquake.

The brothers heard machine gun fire, Allen Patten recalled. Then a cook yelled down, “Hey you guys, we’re being attacked!”

“I caught a glimpse of a torpedo plane flying from the east very low over the water,” Ensign Joseph K. Taussig remembered. “The bomb bay doors were open and out dropped a ‘fish.'”

The assault was on. Other ships were shackled to each other, but the Nevada was by itself, and one of its six boilers was already lighted. The crew cut the mooring lines and within 10 minutes all the boilers were going. “Record time,” Allen Patten recalled.

Like the other ships in the harbor, the Nevada was being pounded by enemy aircraft. It had already been hit by one torpedo and two bombs, Nelson wrote in his 2016 book, “Pearl Harbor, from Infamy to Greatness.”

But at 8:18 that morning, about 20 minutes after the attack began, the Nevada got underway with no senior officers on board.

“How could the ship move?” Steward 1st Class Ben Holt remembered. “It took hours to get up enough steam to get the ship to go. And this ship was moving!”

The Nevada, itself smoking, made its break for the sea.

“As we cleared the burning Arizona, the harbor became visible to us,” recalled Ensign Robert Thomas Jr., who had been knocked down when the Arizona blew up 300 feet away. “Good G-d! The West Virginia was awash and burning, the Oklahoma had capsized, the California was listing and afire. … I thought, ‘We are the only ones left!'”

But the big ship with two towering masts quickly caught the attention of the Japanese pilots. They couldn’t let the Nevada get away to menace their ships. If they could sink it, they could block the entrance to the harbor. The fight was now between clouds of enemy planes and the crippled battleship.

The Nevada fought back, but the diving planes hit home with as many as 10 bombs. The ship started to list, and officers realized that it might indeed go down in the harbor entrance. Orders came to end the escape attempt and beach the ship out of the way near Hospital Point.

Fifty crewmen already had been killed and 109 wounded. None of the Patten brothers was hurt, Nelson wrote. And 3½ years later, Bruce Patten was on a destroyer that steamed into Tokyo Bay for the Japanese surrender in 1945.

Last month, James Delgado watched on his computer screen as an underwater robot examined a mysterious collection of wreckage about three miles beneath the surface of the Pacific Ocean.

Eerie color images of a debris field were beamed from the darkness as the robot scoured the bottom. A target had been identified by sonar earlier, and the robot was moving in to check it out.

One part of it certainly looked like the hull of ship upside down and missing the bow and stern, he said. But was this the Nevada?

“We went out into the debris field,” Delgado said, and spotted two other likely objects. These were probably the separated bow and stern.

“The bow still had wood decking on it,” Delgado said. The anchor chain was there.

Then the robot maneuvered around to check the stern.

As Delgado watched, he said he exclaimed: “There it is!”

Still painted on the side was the hull number, 36.