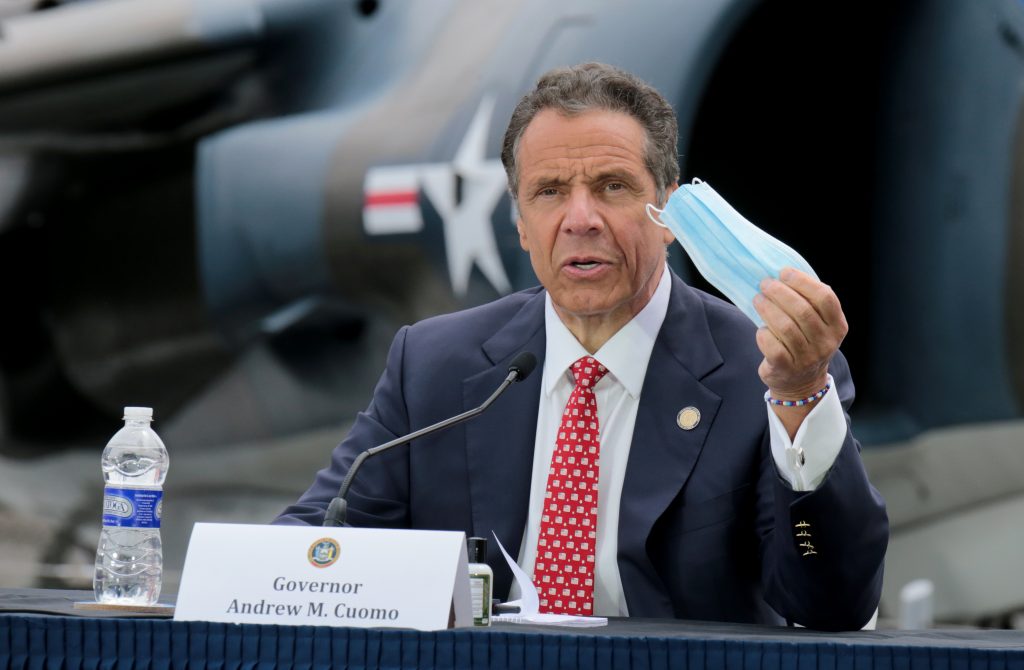 The governor, holding his daily briefing aboard the Intrepid Sea Air and Space Museum in honor of Memorial Day, said public health workers, police, firefighters, transit workers and medics deserve more than just a thank you for their work during the pandemic.

“We will continue to show respect to our front-line heroes not just with words, but with action,” Cuomo said.

Money for the benefits will be provided by local or state pension funds, the governor said.

Antibody testing, which can potentially show whether someone has been exposed to the virus, has revealed a lower rate of infection for many front-line workers in New York City. However, hundreds of health and transit workers, cops, firefighters and EMS responders died over the past three months as the city became the epicenter of the pandemic.

Cuomo also called on the federal government to step up and provide hazard pay to front-line workers.

“I am calling on the federal government to provide dedicated funding for hazard pay for front-line workers,” he said. “They have earned it by showing up and risking their health and lives for all of us.”

Hospitalizations, admissions and intubations are down across the state, the governor said.

Another 96 New Yorkers died from the virus on Sunday, a slight dip from the 109 who died a day earlier.

Ahead of the briefing, Cuomo held a moment of silence and laid a wreath for service members lost and veterans being honored on Memorial Day.

The governor warned that those taking advantage of the holiday weekend should take basic steps to help prevent the spread of the virus such as maintaining social distancing and wearing a mask.

Over the weekend, Cuomo announced that campgrounds and RV parks would be allowed to open as the summer gets underway and many regions of upstate are looking forward to entering the second phase of the state’s reopening plan.

A majority of the state, the city excluded, is now in “phase one,” meaning that construction and manufacturing businesses are allowed to operate.

On Friday, Cuomo said the Mid-Hudson and Long Island regions are on track to start the four-phased reopening process “this week.”