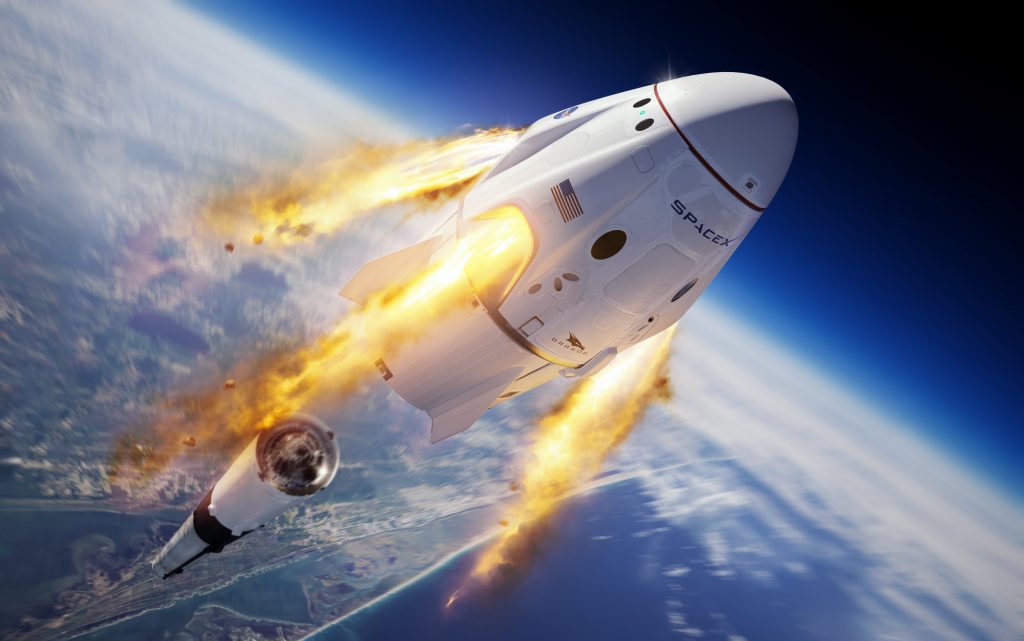 It’s back to the future as NASA astronauts launch again from the U.S. — aboard a retro-style capsule.

Make no mistake: This is not your father’s — or grandfather’s — capsule.

SpaceX’s Dragon crew capsule outshines NASA’s old Apollo spacecraft in virtually every way. The Dragon’s clean lines and minimalist interior, with touchscreens instead of a mess of switches and knobs, make even the space shuttles seem yesteryear.

This fresh take on a vintage look will be on full display Wednesday when SpaceX plans to launch NASA astronauts Doug Hurley and Bob Behnken to the International Space Station — a first for a private company.

It will be the first astronaut launch from Florida since Atlantis closed out the space shuttle program in 2011, and the first American-made capsule to carry people into orbit since the Apollo-Soyuz mission in 1975.

A SpaceX Falcon 9 rocket — with the crew capsule atop — will soar from the same pad used for both of those earlier missions.

Russia’s workhorse Soyuz capsules, still in use after a half-century plus, have kept NASA astronauts flying to the space station. While reliable, the Soyuz looks dated compared with the snappy Dragon.

“We want it to not only be as safe and reliable as you’d expect from the most advanced spacecraft in the world … we also want it to look amazing and look beautiful,” said Benji Reed, a SpaceX mission director.

SpaceX and Boeing, NASA’s other commercial crew provider, opted for capsules from the start.

Another early competitor, Sierra Nevada Corp., proposed a small space plane for astronauts, but did not make the final cut. NASA has since hired the company to haul space station supplies aboard its mini shuttle starting as soon as next year.

There was no need for another flying machine like the shuttle, which was built to haul hefty satellites and space station parts, said retired NASA manager Steve Payne.

“What we’re trying to do now is just taxi service up and down, and you don’t need the huge semi anymore. You can use a sedan,” Payne told The Associated Press.

“Yes, wings are nice. They give you more options as to where to land and a little more control,” said Payne, a former Navy fighter pilot. “But they’re not absolutely necessary. And since we’re trying to make this inexpensive and reusable and as simple as we can make it so that it’s cost effective, capsules work.”

The two astronauts were deeply involved in the new capsule’s development over the past five years. In true test flight fashion, they offered suggestions and tweaked here and there, to benefit not just themselves but future crews.

“Our goal through this entire process is to not turn the spacecraft into Bob and Doug’s excellent machine, with a bunch of things that only Doug likes or only Bob likes,” Behnken said.

Although the full automated Dragon has four seats lined up in a row, only the center two will be occupied for this especially risky test flight. A test dummy soloed on last year’s Dragon crew capsule debut.

This Dragon now has a name, courtesy of its crew. Hurley and Behnken promise to reveal it on launch day, one of many traditions they’re setting into motion as NASA’s commercial crew program finally takes wing.

“We have to save some suspense for the mission itself,” Behnken said. “We’ve got something for you to look forward to on launch day.”