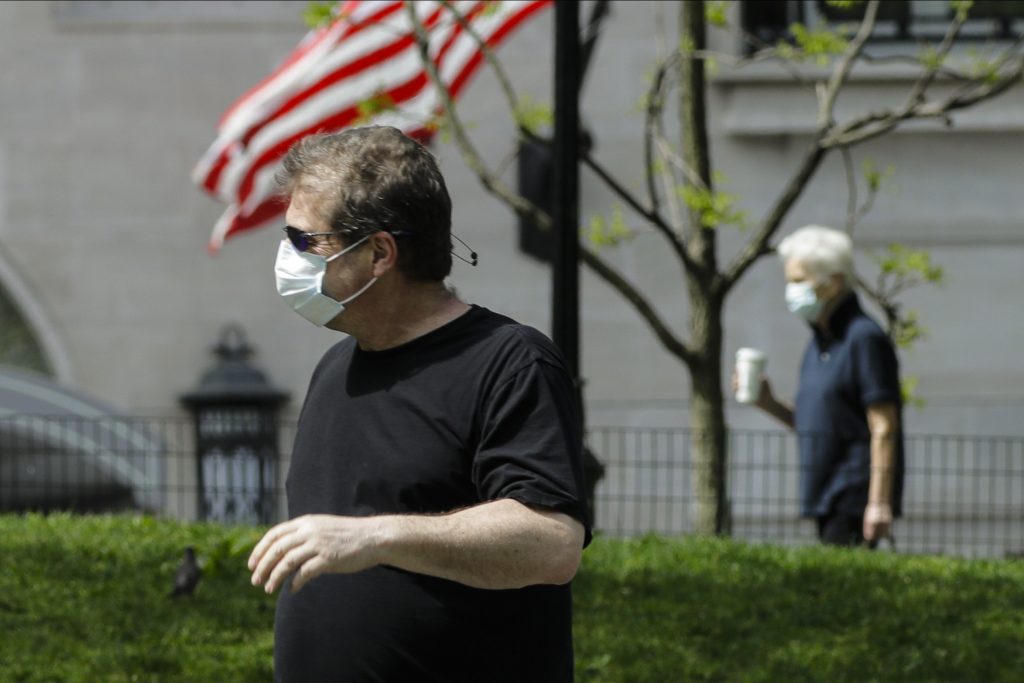 Several dozen protesters gathered in front of the state Capitol in Albany on Saturday holding American flags and signs demanding that businesses reopen.

Gov. Andrew Cuomo has begun to allow large swaths of northern and central New York to starting reopening Friday by allowing certain businesses such as construction to open their doors under safety guidelines.

But most residents — particularly in hard-hit downstate —remain under tight restrictions as their communities try to lower their infection rates and amass enough testing and tracing to reopen in coming weeks or months.

New York’s ban on all non-essential gatherings is still in effect. But the state’s seen reopening protests in communities from Commack to Albany in recent days.

On Saturday, several protesters criticized the governor for some of his recent comments, including those in which he urged New Yorkers to adjust to a “new normal” and his April 22 remark that protesters who want to work should “take a job as an essential job.”

Liz Scott, of Syracuse, said she found the comment “cruel” at a time when many New Yorkers are worried about food and their families.

Michelle Fusco, of rural Knox, who had worked as a waitress for 33 years, said she’s been out of work since March 16 and is receiving less from unemployment than her previous salary. It’s unclear whether the small family-owned diner she worked at will be able to re-hire workers, Fusco said.

“I don’t know what’s going to happen to me in the coming years,” she said. “I like to think I was essential.”

Cuomo also announced that residents of suburban Westchester and Suffolk counties — two of the nation’s early hotspots — will again be eligible for elective surgeries and ambulatory care.

“There was a period where hospitals were dealing basically with COVID patients,” he said. “We are past that period. If you need medical attention, if you need a medical procedure, you should get it.”

The announcements came as hospitalizations, new cases and deaths across the country’s hardest-hit state have continued to flatten or tick down, he said.

There were 157 deaths reported since Friday, encouraging news compared to early April when the daily death toll was topping 700. The state’s overall toll now stands at nearly 22,500.

But Cuomo cautioned that the state could see a rise in cases as the economy opens up. To avoid another spike, people will still need to take precautions like social distancing, he said.

“People are going to be coming out of their homes,” he said. “How do they act when they come out? … If people are smart you will see some increase in numbers, but you won’t see a spike.”

Authorities are investigating an upstate New York barber who contracted COVID-19 after he kept cutting hair in violation of a lockdown order.

The officials in Ulster County sent out a notice earlier this week warning customers of La Lima Barbershop in the city of Kingston should contact their doctors.

A March 21 order sought to halt all services like manicures and haircuts. But shop owner Joseph LaLima kept working in his residence in the rear of his business.

The order “said you can work from home,” a defiant LaLima told The New York Times after a four-day hospital stay. The shop’s address, he added, “is my home!”

The number of New York Police Department officers calling in sick during the coronavirus pandemic has hit a new low.

On Friday, 1,157 uniformed officers were out sick, representing 3.2 percent of the patrol force at the nation’s largest police department. Officials said that’s about the same average sick rate as before the virus outbreak.

So far, 5,552 members of the NYPD have tested positive for coronavirus, with 5,305 recovering and returning to work. There have been 42 deaths.