I had the zchus, for over 35 years, to work closely with the Novominsker Rebbe, ztvk’l, in the vineyards of Agudas Yisroel. Many of those interactions were memorable, and I had frequent occasion to marvel at the brilliance, compassion and vision of this great leader.

But perhaps the project the Rebbe undertook that will remain with me most vividly is the very last one I had the privilege to work with him on: the letter of brocha and chizuk issued by the Moetzes Gedolei HaTorah earlier this week, on Monday 12 Nisan, in advance of the upcoming Yom Tov of Pesach.

One of the ways the Moetzes Gedolei HaTorah communicates with Klal Yisroel is through written statements. For many years, the Novominsker Rebbe served as the primary draftsman of such statements. His mastery of Loshon Hakodesh, and his ability to convey thoughts and ideas with precision, elegance and economy, made the Rebbe the natural choice to put the Moetzes’s directives into writing.

Of course, that is not to say that the Novominsker Rebbe was the sole author of statements of the Moetzes; other members of the Moetzes would typically review the Rebbe’s drafts and offer additions, subtractions or other suggestions. But at the end of the process, the document would largely represent the product of the Rebbe’s labors.

Which brings us to the Moetzes’s most recent 12 Nisan “Michtav Brocha V’chizuk.”

Last Thursday afternoon, 8 Nisan, Reb Shloime Werdiger (chairman of Agudah’s board of trustees) and I called the Rebbe with a suggestion that the Moetzes Gedolei HaTorah issue a pre-Pesach message of chizuk to Klal Yisroel in these unprecedented times. We didn’t spell it out, but of course the Rebbe understood that we were asking him to draft such a statement.

The Rebbe became extremely emotional on the phone. “I am very shvach and really don’t have the koichos to write such a letter, but it’s the right thing to do, and I have an achrayus.” The Rebbe told us he had two prior public commitments he had to deal with first – a telephone shiur he was saying that evening for the kehila of Washington Heights, and another telephone shiur, for the mispallelim of his bais medrash, at noon Friday – and that afterward he would do his best to draft a letter for the Moetzes.

To my amazement, at approximately 10:00 Friday morning I received a call from the Rebbe, telling me that he had decided to work on the text of the letter overnight, and that he would like to read it to me as a proposed Moetzes statement. He then proceeded to dictate his draft statement, four full paragraphs long, which I transcribed.

In discussing the draft with Reb Shloime Werdiger, we felt that the letter might benefit through the addition of one other paragraph, and I conveyed this to the Rebbe on a Motzoei Shabbos phone call. The Rebbe agreed that the suggestion we had made was an important one. “I’m not feeling so well and don’t have the koiach to work on this tonight,” the Rebbe told me, “but b’ezras Hashem I hope to do it tomorrow.”

And so he did. On Sunday afternoon, 11 Nisan, the Rebbe called me to dictate the additional paragraph we had discussed, as well as several other changes he wanted made to the statement. “That’s it, Chaim Dovid, this is what I can do. Please circulate this to as many of the chaveirim of the Moetzes as you can reach, make whatever additional changes they see fit, and let’s get it out to the entire tzibbur tomorrow.”

The turnaround time was tight, but we were able b’H to share and discuss the statement with seven members of the Moetzes, some of whom had minor comments which were incorporated into the statement and all of whom expressed enthusiastic support for the message it embodied.

True to the Rebbe’s directive, we finalized the Moetzes’s Michtav Brocha V’chizuk and published it, along with a rough English-language translation, on Monday afternoon 12 Nisan.

Then, just hours later, in the early morning of 13 Nisan, we heard the besura lo tova that our heilige Novominsker Rebbe had been taken from us. Gevald! Boruch Dayan Ho’emes.

So what was the Rebbe’s parting message to Klal Yisroel? I will not attempt to summarize the many substantive points of the Moetzes statement, but I believe the key point is this:

After taking note of the unprecedented circumstances of the day, when all the pain and suffering we are enduring makes it difficult to fathom how we might conceivably fulfill our obligation on Seder night of celebrating Yetzias Mitzraim as a personal contemporary reality, the Moetzes proclaims “Davka Achshov!” – specifically now we have the opportunity and obligation of celebrating Zman Cheiruseinu, our time of freedom, at a higher level than ever before.

Davka achshav, at a time when everything about our lives has changed so dramatically and all our illusions of “normalcy” have been shattered, davka now is when we can gain a higher appreciation of what Zman Cheiruseinu truly entails and reach new levels of personal contemporary Yetzias Mitzraim.

The message is profound, and is the Novominsker Rebbe’s parting mandate for Klal Yisroel.

On Monday early evening, a few short hours after Agudas Yisroel had published the Michtav Brocha V’chizuk of the Moetzes Gedolei HaTorah, I received a phone call from one of the Rebbe’s sons. He told me that if someone had told him that his father would be capable of writing such a statement over the past few days when he felt so weak, he would never have believed it. Where did he get the koichos to do it?

Obviously, the son answered, the Rebbe saw this as his special achrayus – and when an achrayus was incumbent on him, he would summon koichos that otherwise didn’t exist and carry out what he understood to be his responsibility.

Our loss with the Novominsker Rebbe’s petirah is incalculable. One hopes, though, that the Rebbe – the ultimate ba’al achrayus – will carry out his new achrayus of being a meilitz yosher for Klal Yisroel from his lofty perch b’ginzei meromim. 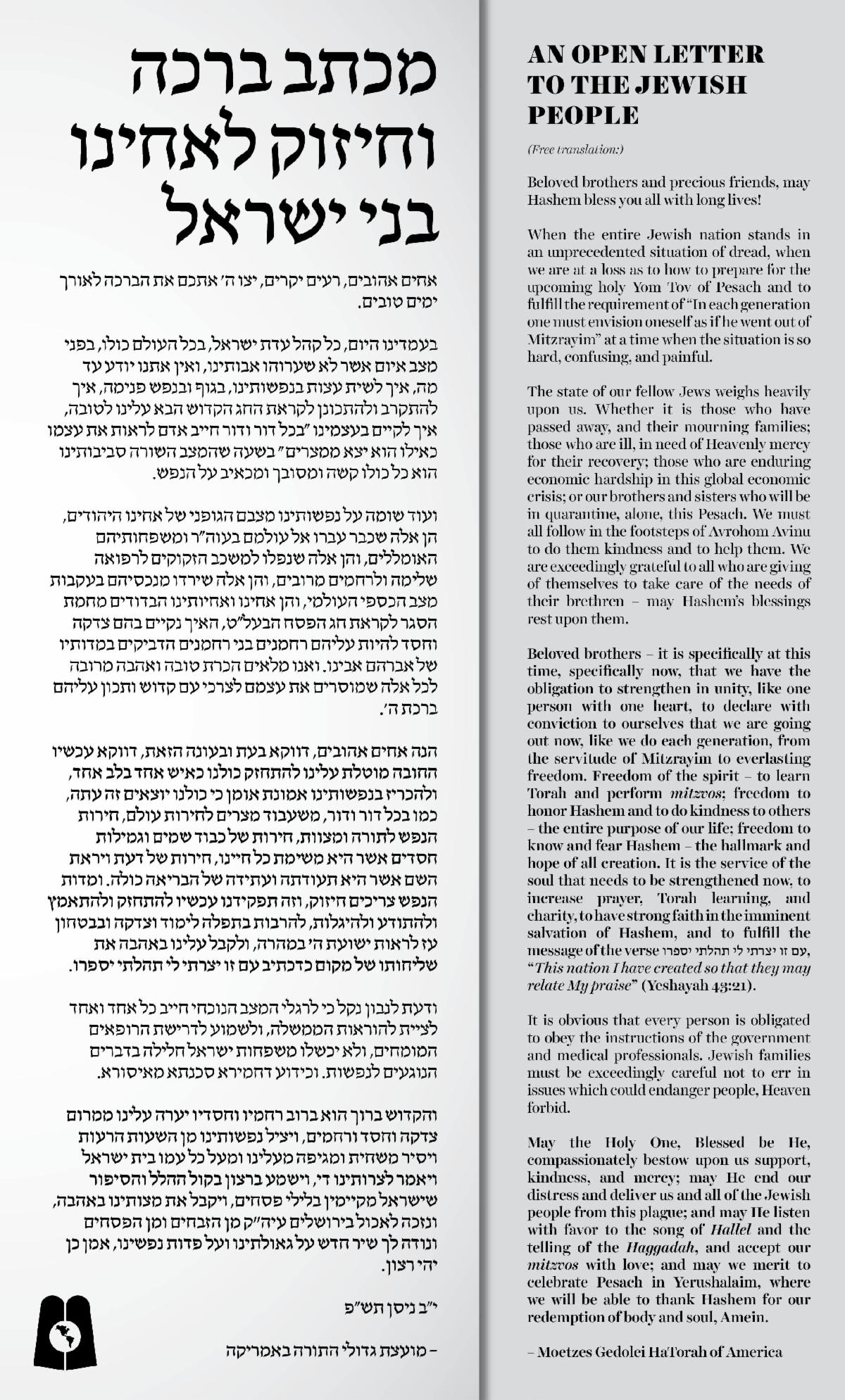