Regional `A Battlefield Behind Your Home’: Deaths Mount in New York
CoronavirusRegional 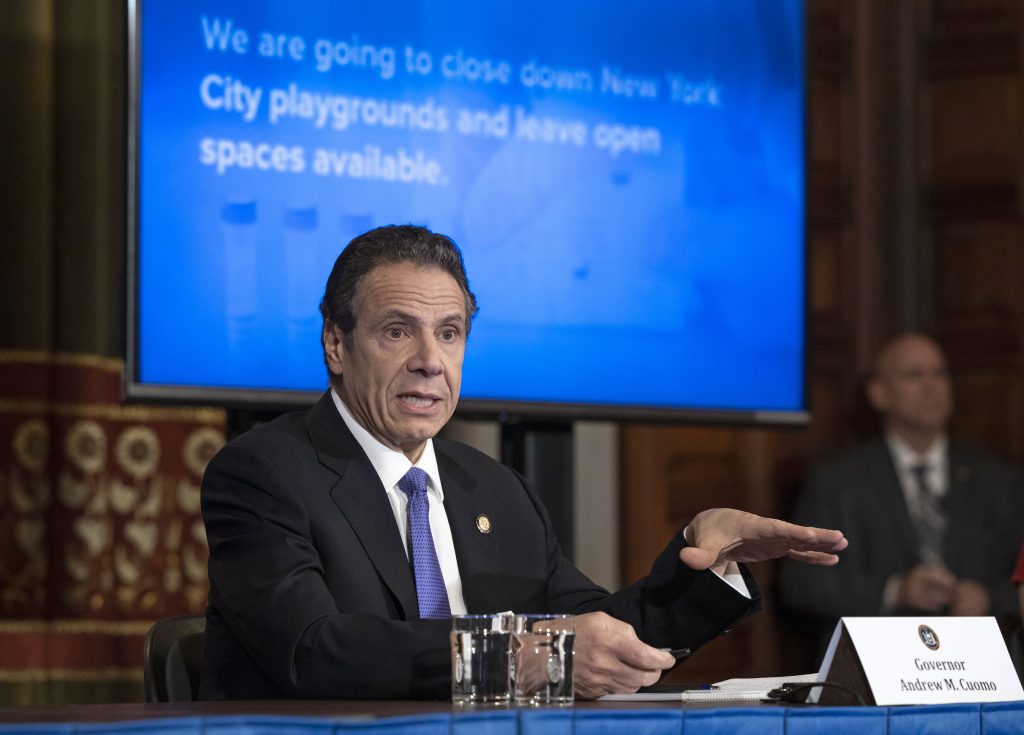 New York authorities rushed to bring in an army of medical volunteers Wednesday as the statewide death toll from the coronavirus doubled in 72 hours to more than 1,900 and the wail of ambulances in the otherwise eerily quiet streets of the city became the heartbreaking soundtrack of the crisis.

As hot spots flared around the U.S. in places like New Orleans and Southern California, the nation’s biggest city was the hardest hit of them all, with bodies loaded onto refrigerated morgue trucks by gurney and forklift outside overwhelmed hospitals, in full view of passing motorists.

“It’s like a battlefield behind your home,” said 33-year-old Emma Sorza, who could hear the sirens from severely swamped Elmhurst Hospital in Queens.

And the worst is yet to come.

“How does it end? And people want answers,” New York Gov. Andrew Cuomo said. “I want answers. The answer is nobody knows for sure.”

President Donald Trump acknowledged that the federal stockpile is nearly depleted of personal protective equipment used by doctors and nurses.

“Difficult days are ahead for our nation,” Trump said. “We’re going to have a couple of weeks, starting pretty much now, but especially a few days from now that are going to be horrific.”

Scientists offered more evidence Wednesday that the coronavirus is spread by seemingly healthy people who show no clear symptoms, leading the U.S. government to issue new guidance warning that anyone exposed to the disease can be considered a carrier.

Stocks tumbled on Wall Street and markets around the world, with 100,000 to 240,000 deaths projected in the U.S. before the crisis is over. The Dow Jones Industrial Average lost more than 970 points, or over 4%.

A new report Wednesday from the United Nations said the global economy could shrink by almost 1% this year instead of growing at a projected 2.5%.

Trump said his administration has agreed to ship out 1,000 ventilators — breathing machines that are vital for treating people with severe cases of COVID-19. He said that the U.S. government has a stockpile of nearly 10,000 but has kept close hold on them so they can be deployed quickly to states that need them.

Meanwhile, European nations facing extraordinary demand for intensive-care beds are putting up makeshift hospitals, unsure whether they will find enough healthy medical staff to run them. London is days away from unveiling a 4,000-bed temporary hospital built in a huge convention center.

In a remarkable turnabout, rich economies where virus cases have exploded are welcoming help from less wealthy ones. Russia sent medical equipment and masks to the United States. Cuba supplied doctors to France. Turkey dispatched protective gear and disinfectant to Italy and Spain.

Worldwide, more than 900,000 people have been infected and over 45,000 have died, according to a tally kept by Johns Hopkins University, though the real figures are believed to be much higher because of testing shortages, differences in counting the dead and large numbers of mild cases that have gone unreported.

More than 80,000 people have volunteered as medical reinforcements in New York, including recent retirees, health care professionals taking a break from their regular jobs and people between gigs.

Few have made it into the field yet, as authorities vet and figure out how to use them, but hospitals are expected to begin bringing them in later this week.

Those who have hit the ground already, many brought in by staffing agencies, found a hospital system being driven to the breaking point.

“It’s hard when you lose patients. It’s hard when you have to tell the family members: ‘I’m sorry, but we did everything that we could,'” said nurse Katherine Ramos, of Cape Coral, Florida, who has been working at New York Presbyterian Hospital. “It’s even harder when we really don’t have the time to mourn, the time to talk about this.”

To ease the crushing caseload, the city’s paramedics have been told they shouldn’t take fatal heart attack victims to hospitals to have them pronounced dead. Patients have been transferred to the Albany area. A Navy hospital ship has docked in New York, the mammoth Javits Convention Center has been turned into a hospital, and the tennis center that hosts the U.S. Open is being converted to one, too.

With New York on near-lockdown, the normally bustling streets in the city of 8.6 million are empty, and sirens are no longer easily ignored as just urban background noise.

“After 9/11, I remember we actually wanted to hear the sound of ambulances on our quiet streets because that meant there were survivors, but we didn’t hear those sounds, and it was heartbreaking. Today, I hear an ambulance on my strangely quiet street and my heart breaks, too,” said 61-year-old Meg Gifford, a former Wall Streeter who lives on Manhattan’s Upper East Side.

Cuomo moved to close the city’s playgrounds because of too much crowding, but people can still use wide-open green spaces as long as they stay 6 feet apart. Police went around in patrol cars, blaring warnings to obey the rules.

Nearly 6,200 New York City police officers, or one-sixth of the department, were out sick Wednesday, including about 4,800 who reported flu-like systems, though it was not clear how many had the virus.

Cuomo said projections suggest the crisis in New York will peak at the end of April, with a high death rate continuing through July.

Elsewhere around the country, the number of dead in Louisiana was put at more than 270. In Southern California, officials reported that at least 51 residents and six staff members at a nursing home east of Los Angeles have been infected and two have died.

Florida’s DeSantis was locked in a standoff over whether two cruise ships with sick and dead passengers may dock in his state. More than 300 U.S. citizens were on board. Two deaths were blamed on the virus, and nine people tested positive, Holland America cruise line said.

Even as the virus appears to have slowed its growth in overwhelmed Italy and in China, where it first emerged, hospitals on the Continent are buckling under the load.

“It feels like we are in a Third World country. We don’t have enough masks, enough protective equipment, and by the end of the week we might be in need of more medication too,” said Paris emergency worker Christophe Prudhomme.

Spain reported a record 864 deaths in one day, for a total of more than 9,000, while France registered an unprecedented 509 and more than 4,000 in all. In Italy, with over 13,000 dead, the most of any country, morgues overflowed with bodies, caskets piled up in churches and doctors were forced to decide which desperately ill patients would get breathing machines.

The strain facing some of the world’s best health care systems has been aggravated by hospital budget cuts over the past decade in Italy, Spain, France and Britain. They have called in medical students, retired doctors and even laid-off flight attendants with first aid training.

The staffing shortage has been worsened by the high numbers of infected personnel. In Italy alone, nearly 10,000 medical workers have contracted the virus and more than 60 doctors have died.

For most people, the coronavirus causes mild or moderate symptoms, such as fever and cough. But for others, especially older adults and people with health problems, it can cause severe symptoms like pneumonia.