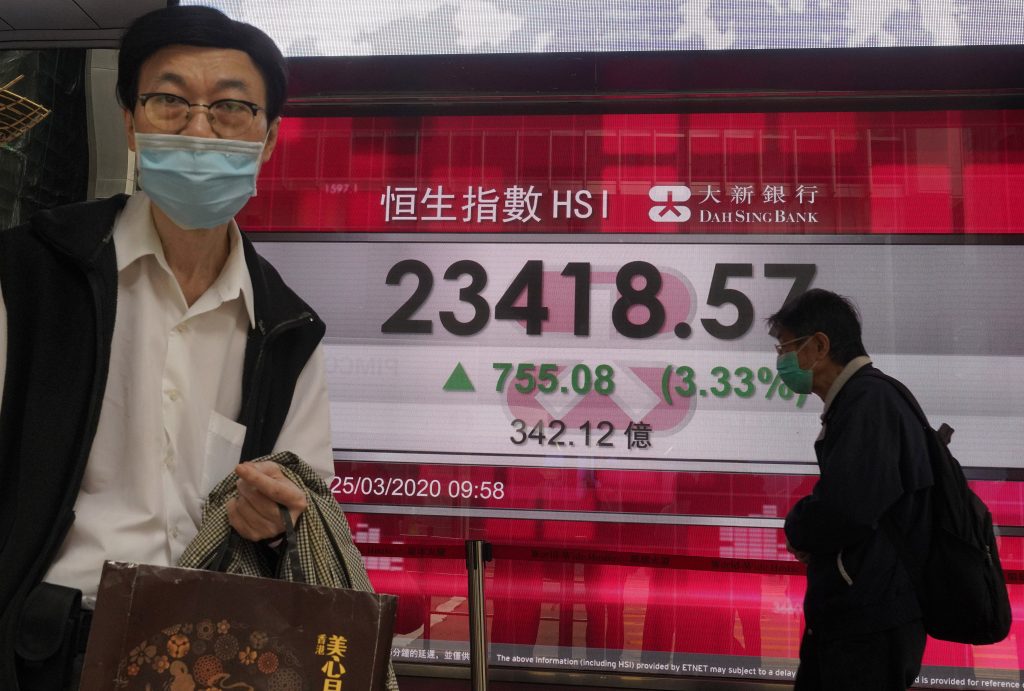 Shares leaped in Asia on Wednesday after the Dow Jones Industrial Average surged to its best day since 1933 as Congress and the White House reached a deal on injecting nearly $2 trillion of aid into an economy ravaged by the coronavirus.

That followed a stunning 11.4% surge in the Dow overnight. The more closely followed S&P 500 index leaped 9.4% as a wave of buying around the world interrupted what has been a brutal month of nearly nonstop selling.

Economists and investors expect to see some dire measures of the impact of the virus in coming days and weeks, and few believe markets have hit bottom. Rallies nearly as big as this have punctuated the last few weeks, and none lasted more than a day.

The breakthrough in the U.S. Congress on the stimulus package was another welcome boost to sentiment. Both Democrats and Republicans worked throughout Tuesday to thrash out the agreement on the massive economic rescue package, which will include payments to U.S. households and aid for small businesses and the travel industry, among other things. A vote in the Senate could come Wednesday.

Now that the Federal Reserve has done nearly all it can to sustain markets, pressure is on Congress to act. Ultimately, investors say they need to see the number of new infections peak before markets can find a floor. The increasing spread is forcing companies to park airplanes, shut hotels and close restaurants to dine-in customers.

“It’s sort of like, keep the patient alive in the emergency room so you can provide some treatment options,” said Katie Nixon, chief investment officer at Northern Trust Wealth Management.

Earlier share rebounds have evaporated. Since stocks began selling off on Feb. 20, the S&P 500 has had six days where it’s risen, and all but one of them were big gains of more than 4%. Afterward, stocks fell an average of 5% the next day.

President Donald Trump said Tuesday during a Fox News virtual town hall that he hopes to “open up ” the economy by next month. Analysts said the pronouncement wasn’t a contributor to the day’s huge rally, which was mostly due to the stimulus hopes.

“Given the enormity of the package, it will most certainly be well initially well-received as it should be sufficient to avoid buttress ‘Main street’ from falling into worst-case, depression-type scenarios, especially with the Fed prepared to monetize all the U.S. government’s debt,” Stephen Innes of AxiCorp. said in a commentary.

For most people, the coronavirus causes only mild or moderate symptoms, such as fever and cough. Those with mild illness recover in about two weeks. Severe illness including pneumonia can occur, especially in the elderly and people with existing health problems. Recovery could take six weeks in such cases.

Governments and central banks in other countries around the world are unveiling unprecedented levels of support for their economies in an attempt to limit the scale of the upcoming virus-related slump.

Germany, a bastion of budgetary discipline, also approved a big fiscal boost. Thailand announced $3.6 billion in stimulus on Tuesday as its prime minister announced a state of emergency likely to bring stronger restrictions on business and travel.

Measures of the shock to the world economy from the pandemic are just beginning to show the extent of its toll on business and livelihoods. In the United States, a preliminary reading on business activity in March showed the steepest contraction on record, going back to 2009. Reports were also gloomy for Europe.

On Thursday, economists expect a report to show the number of Americans applying for jobless claims easily setting a record last week. Some say the number could be way beyond 1 million, amid a wave of layoffs, topping the prior record of 695,000 set in 1982.