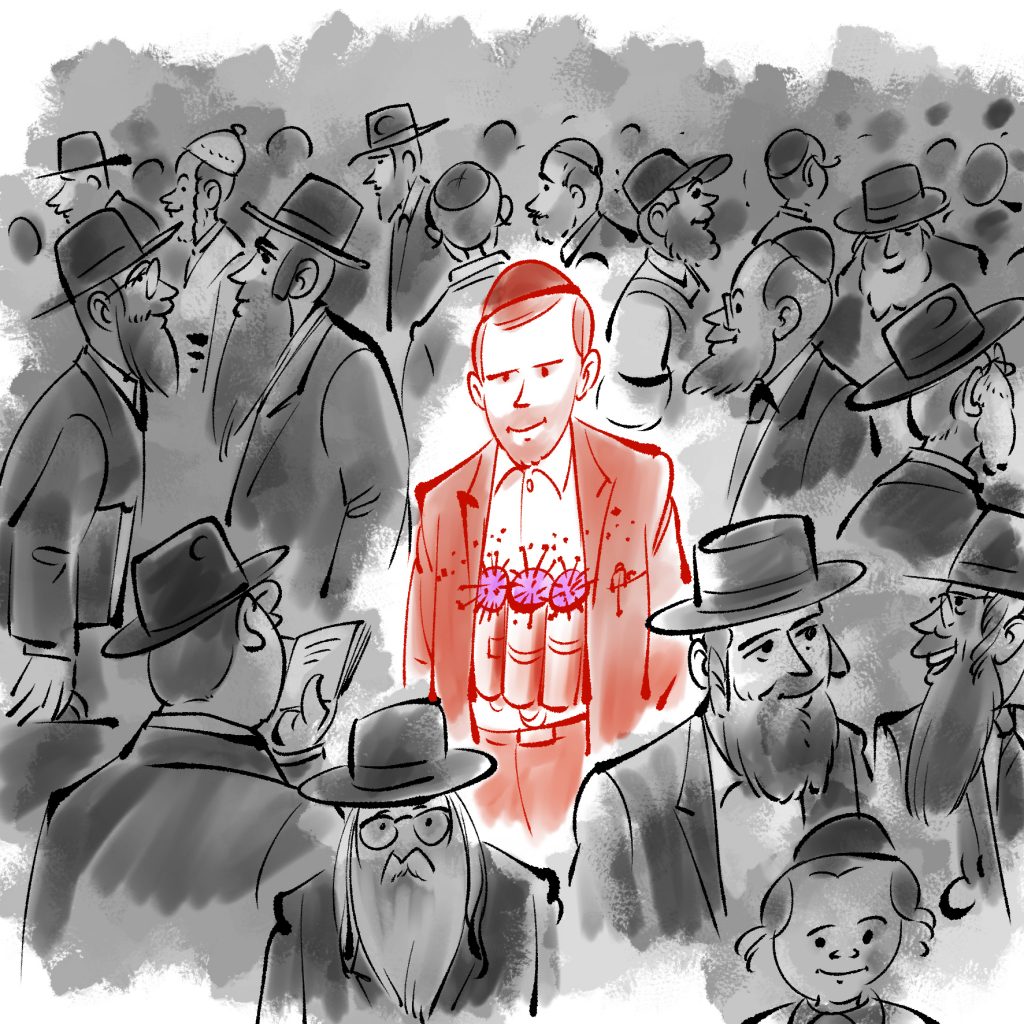 Let’s imagine a wealthy Parisian who threw a fabulous party to celebrate his successful acquisition of a major jewelry company. This was the happy realization of his dreams after years of crafty business dealings and financial manipulation. His invitation list, besides his extended family members and close friends, included the elite of Europe’s financial and political kingpins, with whom he had rubbed shoulders over the years. Of course, he had to arrange for extremely tight security measures to protect his guests. The security service men watched from every angle, following the movements of all those attending. Despite the gala décor of the banquet hall, it was impossible to miss the undertone of tension in the air. This was particularly so since the party’s host was known to be a shadowy character, many of whose activities took place in secret and in countries where few foreign people were admitted.

Since the affair was quite formal, each guest was required to wear a smock frock with a red collar and genuine gold threading. The coatroom was supplied with these garments in all the appropriate sizes, and each guest was asked to pick one and put it on.

In the midst of the festivities, a voice suddenly came through the PA system, speaking French with a thick Arabic accent. Cold and calculated, it declared, “Honored guests! The buttons on five of your smock frocks are loaded with an explosive charge. If any of the people wearing them makes a wrong move, he is liable to set off the charge, which can be lethal to anyone within five meters.”

All the frocks were identical, and there was no way to identify those who were wearing the deadly garments. The guests’ hearts started pounding and their breathing was accelerated. The gaiety was aborted, the music silenced, and in its place came a feeling of helpless dread. Each guest tried to place himself at a safe distance from the others, for his own sake and for the sake of his fellow guests.

Currently, the entire world is experiencing an event similar to the one described above. It affects all the residents of Eretz Yisrael, including the chareidi sector. The coronavirus continues to appear in ever more locations, threatening more and more people on a daily basis. In fact, the chareidi community is even more susceptible to this contagious disease since our way of life automatically calls for group activities, and the larger the better. The secular sector leads a lifestyle with far less intimate social contact, except for large sports events and the like.

Our Torah leaders, who care for our people with motherly love, have recently declared that we must make every effort to follow instructions in order to avoid catching or spreading this contagious virus, applying the Talmud’s ruling that we must be more strict in preserving our safety than we must be to avoid things forbidden by halachah.

The directives coming from the Ministry of Health are not simply recommendations. A person might very well be infected with this virus and remain completely unaware of it. Many of those afflicted do not display any visible symptoms whatsoever. Someone can appear to be perfectly healthy, but then he goes to a shul crowded from end to end, and he is carrying a loaded charge. He is confident that he is okay and that he will remain okay, not paying attention to the elderly man standing next to him. But many years later, when he will be standing in Heaven’s Court, he will suddenly hear that he is accused of murder! He will be held responsible for infecting the old man that stood next to him and causing his death, simply becaue he ignored the instructions given to him by the Gedolim and he disregarded the rules put forth by the Ministry of Health. He recklessly infected people everywhere he went, and some of them did not survive the illness. That’s murder!

You might not realize it, but if you choose not to obey the rules set by the Ministry of Health you are guilty of setting off a powerful explosion of biological warfare. Who permitted you to act so recklessly? How dare you come to perform mitzvos in shul when you disobey the warnings of the Gedolim? Your very presence there is an aveirah. As the Navi cried out, “Who asked for this, that you trespass in My courtyard? Your hands are filled with innocent blood!”

Instead of caring about the community’s welfare and escaping to where you can keep yourself and others safe, you place your head directly under the blade of the guillotine, and cause all those around you to drown in quicksand. You are holding a family celebration? How dare you plan it in ways that are counter to the rules set down by the authorities? Your celebration might bring about others’ mourning? It is like wandering about in a minefield just to enjoy the scenery. Why act like an ostrich with its head in the sand?

In their public letter issued this week, the Gedolim made all this unmistakably clear. As in all previous generations, they are our leaders and guides. Moreover, they have told us that the world’s existence depends on the Torah learned by young and innocent children. Their Torah study is our most powerful protection against this menace. Torah protects and Torah saves. We cannot afford to stop its study for even a moment. The Gedolim insist that our yeshivos remain functioning and that the sweet, high-pitched sound of children studying Torah continue to reverberate, providing all of us with a protective shield. The Torah world has responded by increasing their dedication to intense Torah study, thus sterilizing the entire environment.

Despite this, we must beware of the virus’s dangers and try our utmost to remain on constant vigil. Anyone who has the slightest suspicion that he has been infected, or who has been ordered into quarantine although he has no such suspicion, must refrain from entering the beis medrash and risking harm to others. This is an obligation of the highest order.

The Torah world has displayed impressively its strict obedience to our Gedolim, and the sound of Torah learning continues to ring out. But the uncompromising principle that they have put forth in their public statements is that we must not place others at risk. It is forbidden to cause harm to others. This message must remain before our eyes in neon lights. You might think that occasionally coming into close contact with others is harmless, but only time will tell whether you have been infected or if you have infected others, whether you pulled the trigger button and inadvertently caused others to die, chalilah.

Just yesterday, the number of infected people rose by one hundred. No one had suspected this and no one had seen it happening. No one knew it would happen, but suddenly we saw the terrible results. If you realize later on that you were the ticking bomb, you obviously will feel guilty and try to do teshuvah, but then it is too late. Sometimes, the warnings given us end up engraved onto stone memorials, and in the case of the coronavirus that is all too much a reality. What excuse will you give when you are shown that you wrote those epitaphs? The virus jumps from person to person like a flame jumping from weed to weed. It has already consumed entire fields. If you can keep your small patch clear, the fire will not be able to push any further. If you obey the laws of the quarantine, and if you observe the general rules of caution, you will not only save yourself; you will have the merit of saving many Jewish lives, and each life is an entire world. Life or death — it is entirely up to you. Obey the rules, and choose life!

Hamodia thanks Rabbi Yisroel Friedman,
editor-in-chief of the Hebrew-language Yated, for permission to translate and print this article.