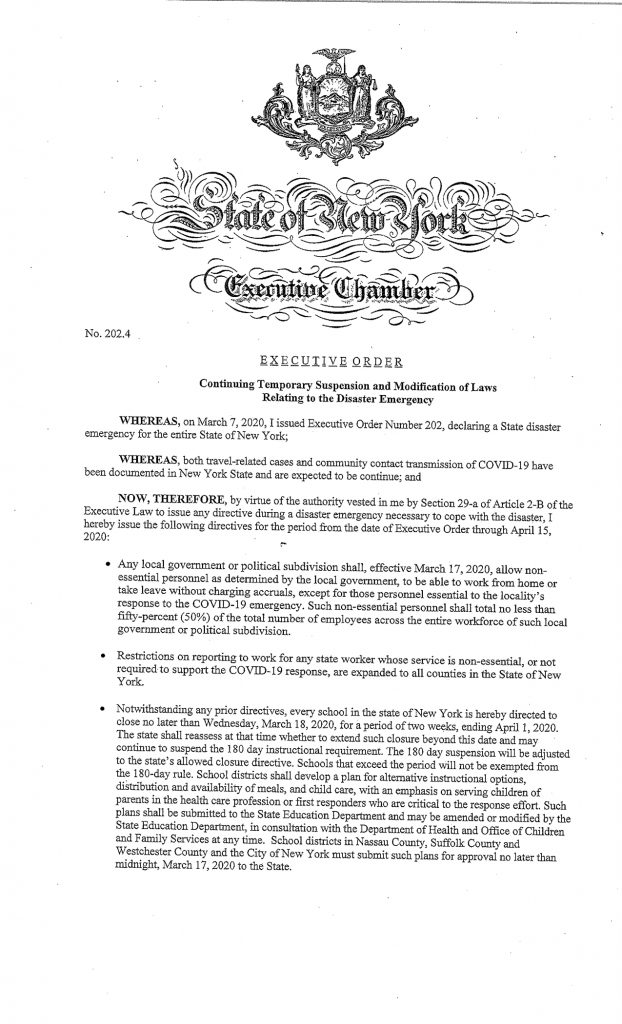 New York state enacted new coronavirus-related regulations Monday, following similar actions by the city on Sunday. The new restrictions include the closing of schools, a ban on eating in restaurants and cafes (only takeout and carryout orders are permitted), and a prohibition on gatherings of more than 50 people. The scope of these regulations how they pertained to religious institutions and simchos was initially unclear, as the new regulations are in a state of flux, with at times contradictory indications from various governmental officials.

After discussions with officials late Monday night and early Tuesday morning, Hamodia can report that:

— The statewide closure of schools includes all private schools as well. The schools must close by no later than Wednesday, and must remain shuttered until at least April 1, pending further orders from Gov. Andrew Cuomo.

To mitigate the effects of missed classes, ensure that children who rely on school meals remain properly nourished throughout the closure, and to avoid medical professionals having to miss time from work to stay home with their children, Cuomo’s executive order mandates that school districts “develop a plan for alternative instructional options, distribution and availability of meals, and child care, with an emphasis on serving children of parents in the health care profession or first responders who are critical to the response effort.”

— The ban on gatherings of more than 50 people applies to houses of worship.

— It appears that New York City may treat weddings and other simchos held in catering halls more stringently than the State. The state is considering weddings as social gatherings, which are permitted so long as there are no more than 50 people – unless the city/county in which it is held has enacted stricter regulations. Some city officials have said that catering halls will be viewed as similar to restaurants, where dining is prohibited, so weddings in halls will not be permitted regardless of crowd size. But at least one high-ranking official has said that the city will allow these simchos to be held as long as fewer than 50 people attend.