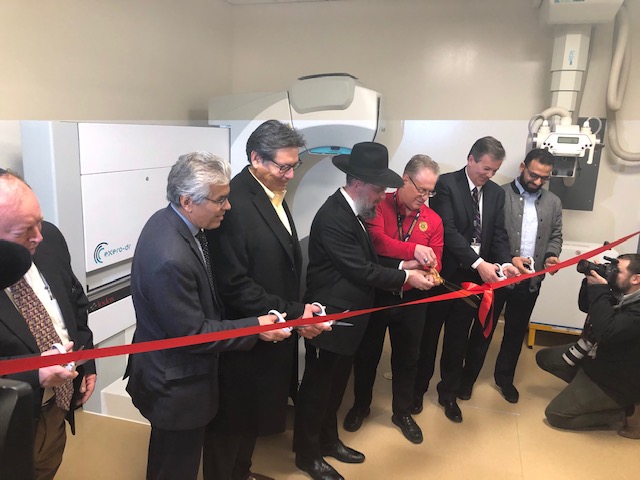 In what can be called a major step in the fight to prevent autopsies, the City of Denver recently obtained a Lodox imaging system due to the efforts of Rabbi Tzvi Steinberg, Rav of Congregation Zera Avraham in Denver. The Lodox imaging system, which is of unprecedented quality and at the forefront of imaging technology, can produce high-quality, full-body X-rays which, in some cases, may avoid the requirement for a traditional, invasive autopsy.
This technology is warmly welcomed by the Jewish, Muslim and Native American communities, who all object to autopsies. The system was purchased due to the intervention of Rabbi Steinberg, who has cultivated a warm relationship with the Denver Medical Examiner.
“In an effort to be more inclusive and to best serve the diverse and growing Denver community, Denver OME [Office of the Medical Examiner] worked diligently to secure funding for the state-of-the-art Lodox full-body imaging system,” said Dr. James Caruso, Chief Medical Examiner for Denver. “Not only does the Lodox preserve the sanctity of keeping the body complete, an important concern for certain religions and cultures, but it also is used as a supplemental tool for cases where a traditional autopsy will be performed. In cases where the medical examiner determines that an autopsy can be avoided, Lodox helps take the guesswork out of the determination of the cause of death.”
“Autopsies are a serious concern,” says Rabbi Steinberg. “Aside for halachic concerns, they cause tremendous grief for the family. Most states are not favorable for Yidden in this area. It is really a terrible thing.”
Rabbi Steinberg explains that in many states, autopsies are demanded by law in many situations, including in cases of homicide, vehicular accidents, overdose, SIDS, or if the body of a deceased is found alone. A full autopsy is a very invasive procedure and is a real desecration of the body. Sometimes there are other, less invasive options, such as analyzing the blood (toxicology), but these options cannot be used in all circumstances and can take several weeks to get conclusive results, which further complicates matters. Furthermore, if there is a life insurance claim at stake, toxicology is not enough for the life insurance company to issue the benefits.

The Lodox machine, which is a low-dose X-ray, can take a 360-degree, high-quality image of the body in 13 seconds. This machine, which is six feet long, costs approximately $600,000. It is a unique machine that can avert many, though not all, autopsies. Offices of coroners and medical examiners are beginning to obtain this unique machine because its use is safer, more convenient and often more efficient; it has little exposure of radiation; it does not involve heavy lifting; and it does not expose medical examiners to diseases that the deceased may have had.
Rabbi Steinberg relates an unfortunate homicide case where someone was killed by a bullet to his head. However, the bullet remained in the body, and criminal investigations required that the bullet be located. Using a Lodox machine, the bullet was found in the stomach and was able to be retrieved with just a small incision.
In another case, a small child passed away. With the Lodox machine, it was discovered that the child had choked on a small object that was lodged in his throat. In both of these cases, the Lodox averted the need for invasive autopsies.
Over the past seven years, Rabbi Steinberg has developed a very positive relationship with the Medical Examiner.
“He has always been considerate and sensitive to Jewish requests and has interceded with coroners in other Colorado counties and cities.” relates Rabbi Steinberg. “Of course, our requests have to be done with tact and finesse. Whenever an autopsy is averted, I make it a point to thank every person in the office. I appreciate their sensitivity.”
After a recent, complicated case in which Rabbi Steinberg was able to intercede an avoid an autopsy, the Medical Examiner approached Rabbi Steinberg and said that the incident had made a deep impression on him, and he was determined to finalize the decision to purchase the Lodox machine. This development was done with the faith-based communities in mind and was paid for by a grant from the City of Denver.
When the Lodox machine was finally in place, Rabbi Steinberg encouraged the OME to hold a ribbon-cutting ceremony to express appreciation to the OME and to properly celebrate this significant event.
The event, which was held on Wednesday, Feb. 5, with the attendance of Rabbi Yaakov Meyer, Rav of Aish of the Rockies; Rabbi Ben Last, representing the Rocky Mountain Chevra Kaddisha; Mrs. JoAnn O’Connor, representing the women’s division of the Rocky Mountain Chevra Kaddisha; Rabbi Mordechai Hoffman, Executive Director of Hillel Academy of Denver; and Rabbi Yitzchok Shifrin, Administrator of Congregation Zera Avraham.
Representatives from the Muslim and Native American communities also attended, including Mr. Rick Waters representing the Denver Indian Center for Native American Culture, and Imam Mohamed Kolila of Downtown Denver Islamic Center.
Rabbi Ben Last remarked, “The Lodox machine is one of the biggest brachos for modern medicine. I can’t tell you how many times we had to address doing a taharah on someone who had an autopsy. Due to the lack of Jewish presence in Colorado relative to bigger cities, there are proportionately more autopsies being performed. If the Lodox machine will minimize the number of autopsies, then it is absolutely fantastic.”
Rabbi A.D. Motzen, National Director of State Relations for Agudath Israel of America, has much experience with attempts to avert autopsies. He explains, “The Denver OME joins the growing number of offices that are purchasing such machines. It helps them perform their duties, as well as allowing them to better accommodate the religious needs of decedents and their families.
“Using scanners can help avoid unnecessary autopsies, minimize invasiveness, and speed up the process as much as possible so that burial can take place as soon as possible. Agudah, often in partnership with Rabbi Elchonon Zohn of the National Association of Chevra Kadisha, has worked with medical examiners around the country, advocating for laws and protocols which accommodate religious sensitivity in this area.”
Rabbi Motzen continued, “A number of years ago, Rabbi Steinberg and I presented to the Midwest Agudath Israel Council of Synagogue Rabbanim on the need for Rabbanim to proactively develop positive relationships with the offices of coroners and medical examiners. Rabbi Steinberg began developing a relationship with the Medical Examiner soon after he moved to Denver. He is a prime example of the role Rabbanim can play to ensure kvod hameis in their community.”