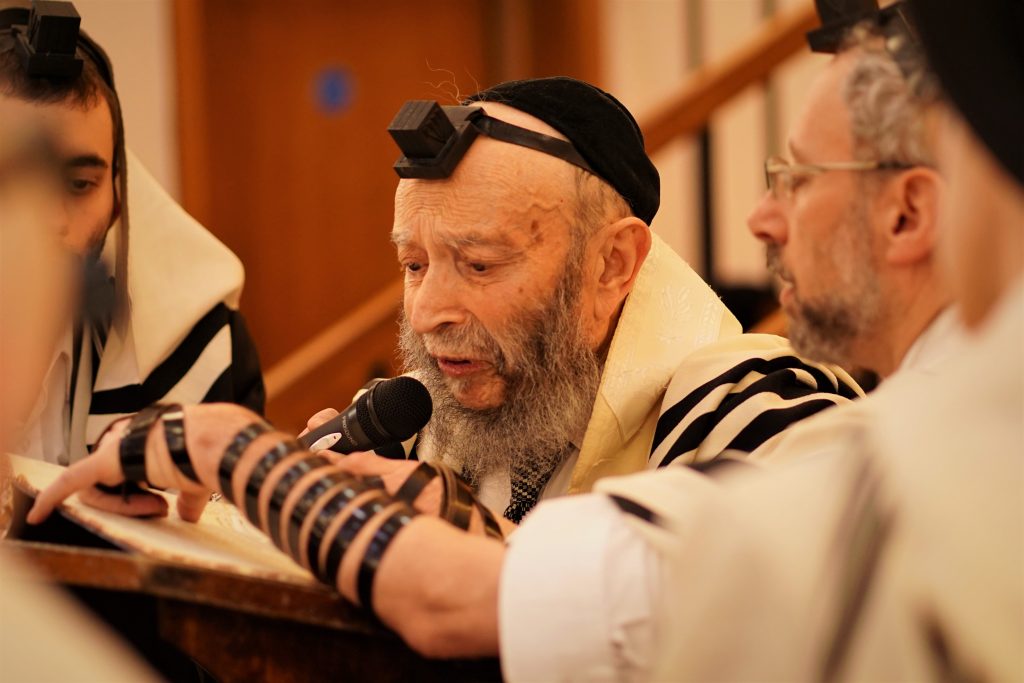 London Jewry was deeply saddened at the news of the passing of Rav Chaim Feldman, former Rav of Golders Green Beis Hamedrash (Munks), who had led the kehillah for half a century. He was niftar on Tuesday, Rosh Chodesh Adar, following a brief illness. The levayah left from GGBH on Tuesday evening, to Eretz Yisrael where kevurah took place on Wednesday at the Eretz HaChaim beis olam in Beit Shemesh.

Rav Feldman was born in Llanelli, Wales, the oldest child of Rabbi Refoel and Sophie Feldman. As a small child he lived in Stamford Hill, until his father became the Rav of Shepherd’s Bush Synagogue and the family moved to Hammersmith.

With the onset of WWII, the family moved back to Llanelli, whilst their father remained in Hammersmith. On their eventual return to London, Rav Feldman attended City of London School, from where, unlike his peers who went on to top universities, he continued his education in Gateshead Yeshivah.

He received semichah there and then spent many cherished months doing shimush with Dayan Weiss, zt”l, in Manchester, who gave him a second semichah. He then returned to Gateshead, but the Manchester Rosh Yeshiva instructed him to go to Eretz Yisrael where he could bask in the influence of the revered Gedolim at the time. It was 1952. He merited to forge close connections with Rav Bengis, the Chazon Ish and the Brisker Rav, zt”l, as well as learning under an illustrious line-up of Maggidei Shiur, Rav Lazer Yudel Finkel, Rav Chaim Shmulevitz and Rav Chatzkel Lewenstein, zt”l.

Armed with the kedushah and mussar he had imbibed in those two years, he returned to Gateshead where he learnt in Rav Dessler’s kollel, marrying his Rebbetzin, daughter of Rabbi Moshe Aryeh and Tzerle Bamberger in 1954. After his father-in-law’s petirah, Rav Feldman took over the reins of the Jewish Boarding School, with the support of his Rebbetzin, until 1963, when the next phase in the couple’s life devoted to the klal began to unfold; the appointment as assistant Rav and Rebbetzin of the Golders Green Beis Hamedrash (GGBH).

With a young family of children, they made the move to Golders Green and, in 1968, Rav Feldman became the full-fledged Rav. He embraced the needs of the kehillah members, bringing them together even though many were from different backgrounds to his, his vision being that the shul should be a community rather than purely a makom tefillah. He ran a packed schedule, teaching boys at the shul cheder on Finchley Road after school hours as well as giving shiurim, paskening she’eilos with utmost clarity, supporting couples and families going through challenges, providing guidance to the Menorah Primary and Hasmonean Schools, serving under Kedassia Kashrus and of course participating in the simchos of his members. This was in addition to running the many areas of activity he had established within the shul, which is known for its chessed and devotion to limud haTorah.

After his retirement following five successful decades of leading his kehillah, he enjoyed continuous Torah learning. During recent years when his mobility was compromised he was grateful for the luxury that he could continue with his greatest passion; that of having a gemara before him.

May he be a meilitz yosher for his family, his beloved kehillah, his talmidim and all of Klal Yisrael.