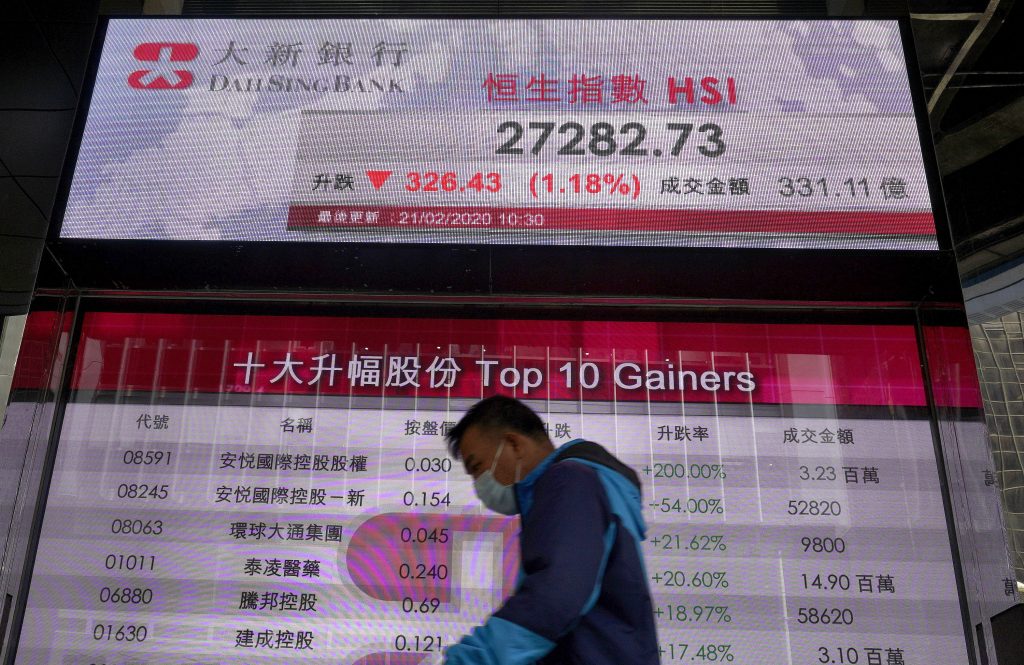 Bond markets are “sounding a warning on global growth” as virus fears spread to South Korea, Singapore and other economies, DBS analysts said in a report.

Markets had been gaining on hopes the outbreak that began in central China might be under control following government controls that shut down much of the world’s second-largest economy. Sentiment was buoyed by stronger-than-expected U.S. economic data and rate cuts by China and other Asian central banks to blunt the economic impact.

But investors were jarred by South Korea’s report of 52 new cases of the coronavirus, raising its total to 156, most of them since Wednesday. That renewed concern that the infection is spreading in South Korea, Singapore and other Asian economies.

Yields on 30-year U.S. Treasuries are below 2%, a level last seen in September “when U.S-China trade fears were acute,” said the DBS analysts.

Despite a decline in numbers of new Chinese cases, other data indicate that a pickup in economic activity “is still elusive,” they wrote.

China reported 118 deaths and 889 new cases in the 24 hours through midnight Thursday.

The number of new cases reported each day has been declining but changes in how Chinese authorities count infections have raised doubts about the true trajectory of the epidemic.

The Korea Centers for Disease Control and Prevention said 41 of the new 52 cases were in the southeastern city of Daegu and the surrounding region.

South Korea’s government declared the area a “special management zone” Friday. The mayor of Daegu urged the city’s 2.5 million people to stay home and wear masks even indoors if possible.

Also Friday, a measure of Japan’s manufacturing activity tumbled to an eight-year low and a companion gauge of service industries dropped even more sharply.

The preliminary purchasing managers’ index for February declined to 47.7 from the previous month’s 48.8 on a 100-point scale on which numbers below 50 show activity contracting. The preliminary services PMI plunged to 46.4 from January’s 51.0.

The decline “underlines that the coronavirus has started to weaken activity,” said Marcel Thieliant of Capital Economics in a report.

To contain the disease, China starting in late January cut off most access to Wuhan, the central city where the first cases occurred, and extended the Lunar New Year holiday to keep factories and offices closed and workers at home.

Some Chinese factories and other businesses are reopening but restrictions that in some areas allow only one member of a household out each day still are in place. Forecasters say auto manufacturing and other industries won’t return to normal until at least mid-March.

A rise in new cases in Beijing, the capital, “raises alarm” because it suggests major Chinese cities “may be under pressure to contain the virus amidst returning workers” as companies reopen, said Mizuho Bank in a report.

A growing number of companies say they expect to suffer losses due to the virus.

The world’s largest shipping company, Denmark’s A.P. Moller Maersk, said Thursday it expects a weak start to the year. Air France said the disease could mean a hit of up to 200 million euros ($220 million) for its results from February to April.

The worries overshadowed encouraging data on the U.S. economy.

A survey of manufacturers in the mid-Atlantic region jumped to its highest level since February 2017. A separate report showed leading economic indicators in the United States rose more in January than economists forecast. The number of workers applying for jobless claims rose but stayed low.