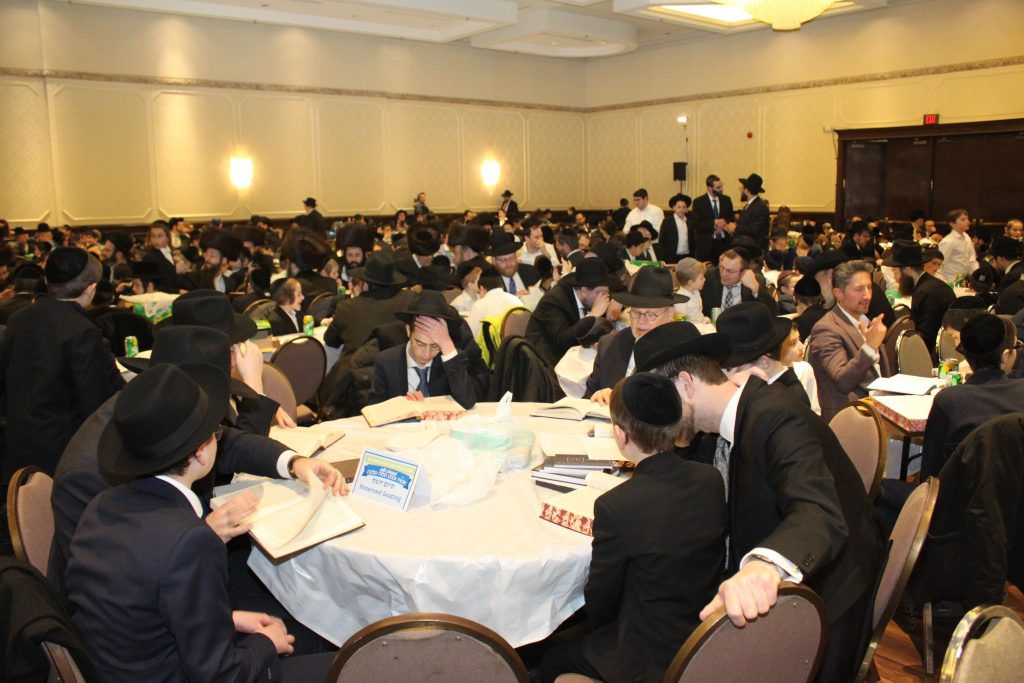 On Motzoei Shabbos Parashas Beshalach, February 8, something special happened in Toronto, as the annual Avos Ubanim melaveh malkah/Pirchei siyum Mishnayos teamed up with the Masmidei HaSiyum of Agudath Israel for a huge event attended by approximately 1,500 children and fathers. It was a truly spectacular event, as Rabbi Dovid Engel, menahel of the Toronto Cheder, asserted. “I attended four siyumei haShas over the past few months, but this siyum Mishnayos had a special significance. The excitement was palpable in the air; there was a unique simchah of fathers and sons, who were celebrating a year of learning together. Seeing the simchah of the fathers and sons dancing together was very moving.”

The Toronto Avos Ubanim and Pirchei melaveh malkah siyum Mishnayos, now in its 20th year, is a unique display of achdus, engendering a chashivus haTorah on a community-wide level. Each year, in advance of the melaveh malkah, the children of the Toronto community collectively learn tens of thousands of mishnayos, record their accomplishments, and receive tickets based on the number of mishnayos learned. Highlights of the program each year include the attendance of local Rabbanim — which adds a level of chashivus to the event — a story told by master storyteller Rabbi Moshe Blaustein, and of course, lots of raffle prizes. The program concludes with a hartzig kumzitz.

Each year, the program has been sponsored by the Grubner family, originally l’zecher nishmas their father, Reb Mordechai Grubner, z”l. Reb Aron Grubner is known to have asserted that this was the best deal of his life. The Grubner family is proud and honored to continue the partnership in memory of both of their parents.

Each year, the siyum Mishnayos has grown, with more and more boys learning more and more mishnayos, and although the program has always been run as an out-of-school initiative, the support from local mosdos has increased as well. Last year topped all expectations with approximately 1,000 people attending the event, 80,000 mishnayos learned and over 250 boys completing a masechta.

At last year’s siyum, with the plans already underway for the global Siyum HaShas, it was announced that the annual siyum Mishnayos would be combined with the Agudah’s Masmidei HaSiyum program (after consultation with the office of  Agudath Israel of America). A goal was set for 250,000 mishnayos to be learned, and the program, which would also include lines of Gemara and pesukim of Chumash, was supported by Agudah’s state-of-the-art computer call-in system, where each boy was able to keep track of his learning.

“Wow, what a partnership,” remarked one of the organizers. “Registration jumped from 800 children to 1,300. We knew that the amount of learning generated by this partnership would be staggering, and it was! All in all, 180,000 mishnayos, 550,000 lines of Gemara and 650,000 pesukim of Chumash were learned. The magnitude of this siyum is hard to comprehend. This year was unique with the partnership between the siyum Mishnayos and the Agudah’s Masmidei HaSiyum, but one thing we clearly learned is that we can shoot for the skies, because our children will amaze us with what they can accomplish.”

Shlomo Simcha opened the program with a beautiful song. Rabbi Yoel Rosenberg, a Rebbi in the Toronto Cheder, inspired the audience by relating that at the Siyum HaShas in MetLife, there were two rounds of dancing — one after finishing Shas, and one for the children through the Masmidei HaSiyum program, after finishing Mishnayos. In Toronto, the kehillah had only danced once, at the citywide siyum haShas, and that was for finishing Shas. This evening, however, would be the dancing for the kehillah’s children, the Toronto masmidim, and for their siyum Mishnayos, providing the finishing touches to the beautiful Toronto siyum haShas. Rabbi Rosenberg then learned the last mishnah with the audience, and six boys, each representing another cheder in Toronto, led the Hadran.

Kaddish was then said by Mr. Issac Grubner in memory of his parents. This was followed by electrifying dancing right across the hall, as children, parents and grandparents all joined hands and danced together with true simchas haTorah.

All agreed that seeing the overflow crowd of 1,500 people celebrating together was truly magnificent. A warm feeling between all the participants — fathers, sons and Rebbeim — permeated the evening. As Rabbi Engel commented, “It was very meaningful to see so many talmidim approach the Rebbeim and menahalim sitting on the dais to wish them a gut voch, signifying the close relationship that the children feel for their Rebbeim.”

The siyum was also graced by Harav Yitzchok Kolodetsky, son-in-law of Harav Chaim Kanievsky, shlita, who bentched the boys and their parents, as he read the Yehi Ratzon that is said by women when they bentch licht. Rav Kolodetsky was clearly overwhelmed by what he saw. Later that night, he told his host, Reb Yaakov Kaplan, that he has never seen such a display of achdus haTorah, spanning the full spectrum of frum Yidden.

Rabbi Shlomo Schwartz, Head of School of Eitz Chaim Schools, remarked, “This event indicates the primacy of starting each week with limud haTorah for our families. Moreover, this year, with the emphasis on the Siyum HaShas and the Masmidei HaSiyum, the impact was overwhelming. The program was not just based on winning prizes, but about the geshmak of being with so many others, to celebrate together the accomplishment of limud haTorah. This enforces achdus in ahavas haTorah, as we joined together and danced with students from other schools. After all, we all work for the same Eibershter, despite … our differing derech halimud. The experience of coming together tachas kanfei haShechinah will stay with the children for a lifetime.”