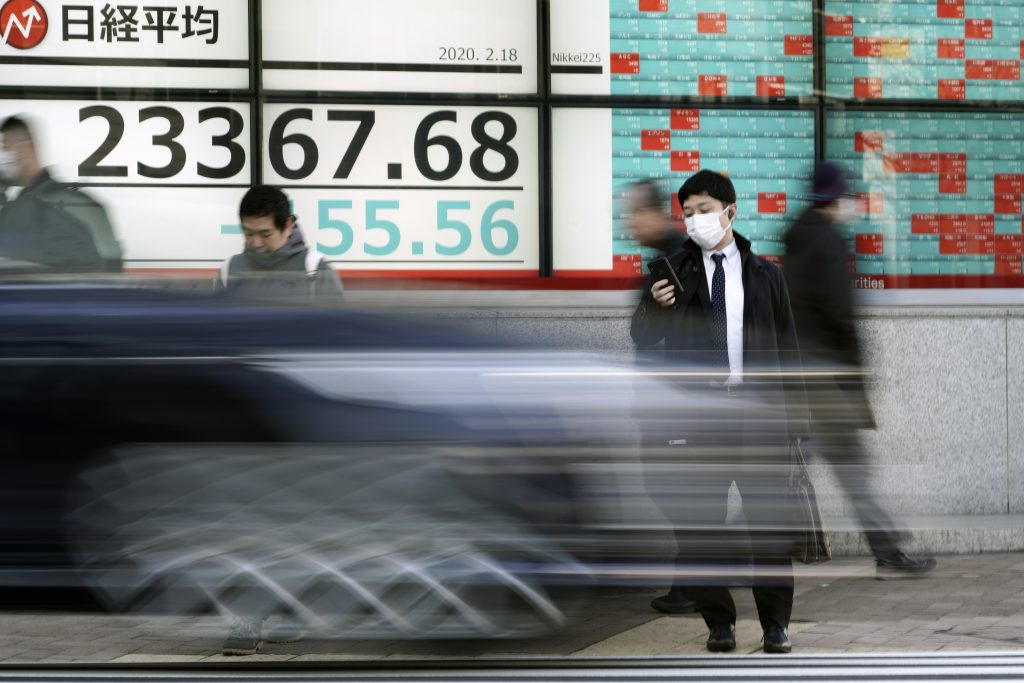 Shares slipped in Asia on Tuesday as the impact from the virus outbreak that began in China deepened, with Apple saying it would fail to meet its profit target and China moving to postpone or cancel major events including the Beijing auto show.

Signs suggest China may postpone its annual congress, its biggest political meeting of the year. The standing committee for the National People’s Congress will meet Feb. 24 to deliberate postponing the meeting that is due to start March 5.

Shanghai’s benchmark jumped more than 2% on Monday after the central bank rolled out more measures to help support the economy. Most other markets also rose.

China’s biannual auto show, one of the industry’s biggest international events, has been postponed, and many other cultural events have been delayed or canceled to avoid travel that may spread the virus. The death toll from the outbreak rose to 1,868, and the total of confirmed cases to 72,436.

China reported 1,886 new virus cases and 98 more deaths in its update Tuesday. A report saying the disease outbreak has caused a mild illness in most people raised optimism among global health authorities.

But as the outbreak persists, bringing new travel advisories and disrupting trade, travel and supply chains, it is casting a vast shadow over the regional economy.

“Best to buckle in as we could be in for a bumpy ride the next few weeks as I’m struggling to find any research report that doesn’t suggest: “Covid-19 could significantly affect short term earnings: Reiterate Sell,” Stephen Innes of AxiCorp said in a report.

U.S. markets were closed Monday for President’s Day. Futures for the S&P 500 and the Dow Jones Industrial Average fell 0.3% in electronic trading on Tuesday.

Apple Inc. joined the growing number of companies who are forecasting a hit to their bottom lines from the outbreak, which has prompted Chinese authorities to put cities that are home to more than 60 million people to go into lockdown.

“The health and well-being of every person who helps make these products possible is our paramount priority, and we are working in close consultation with our suppliers and public health experts as this ramp continues,” Apple said in a statement.

In other trading, benchmark U.S. crude oil lost 37 cents to $51.68 per barrel in electronic trading on the New York Mercantile Exchange. Brent crude oil, the international standard, lost 58 cents to $57.09 per barrel. It gained 35 cents on Monday to $57.67.