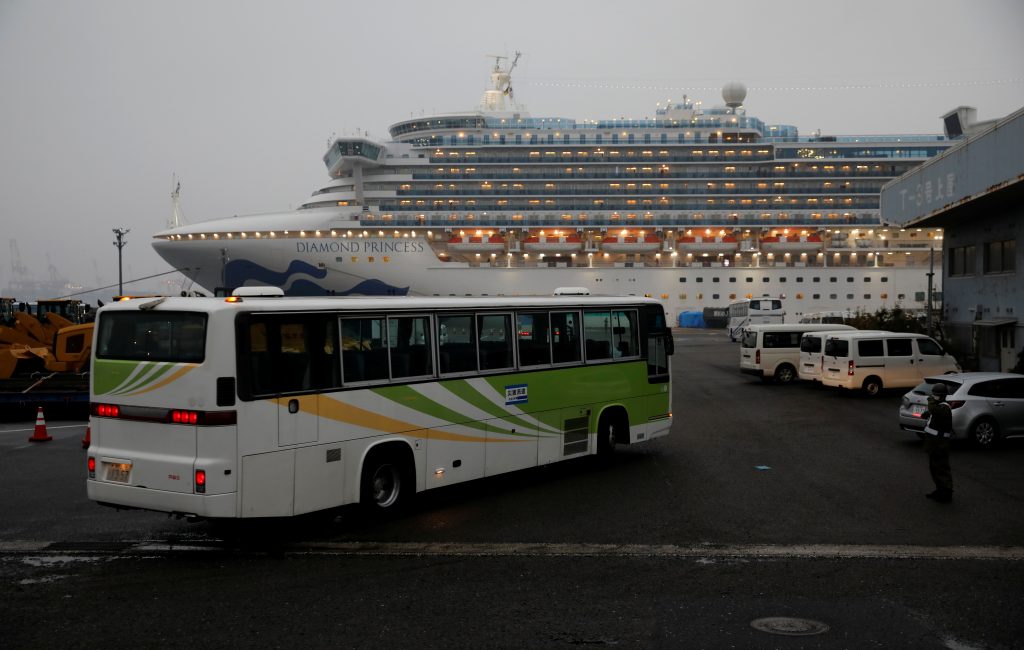 American passengers were taken off a cruise liner on Sunday to fly home after being quarantined for two weeks off Japan, while China said the rate of new coronavirus cases had slowed, calling that proof its steps to fight the outbreak were working.

An announcement aboard the Diamond Princess, where 3,700 passengers and crew have been held since Feb. 3, told Americans to get ready to disembark on Sunday evening for charter flights home. Passengers wearing masks could later be seen waving through the windows of buses parked near the ship.

Of the roughly 400 Americans on the cruise, more than 40 are infected with the virus and will stay in Japan for treatment, said Dr. Anthony Fauci, director of the U.S. National Institute on Allergy and Infectious Diseases (NIAID).

“They are not going to go anywhere. They’re going to be in hospitals in Japan,” Fauci told the CBS News program “Face the Nation.”

“People who have symptoms will not be able to get on the evacuation plane. Others are going to be evacuated starting imminently to air force bases in the United States.”

“Leaving in a few hours. No details. Might be going to Texas or Nebraska,” U.S. passenger Gay Courter told Reuters.

Seventy new coronavirus cases were confirmed on board, bringing the total on the ship to 355, by far the largest cluster of cases outside China. Fauci told The Washington Post there were 44 infected Americans.

Within China, authorities reported 2,009 new cases on Sunday, noting that this was down from more than 2,600 the previous day. They said this showed their efforts to halt the spread of the virus were bearing fruit.

“The effect of the coronavirus controls is appearing,” Mi Feng, spokesman for the Health Commission, told reporters.

The new cases brought the total to 68,500 in mainland China, with 1,665 deaths, including 143 fatalities reported on Sunday.

Outside China, more than 500 cases have been confirmed, mostly of people who traveled from Chinese cities, with five deaths.

The coronavirus is thought to have emerged at a wildlife market in China’s central province of Hubei. China’s response has included putting Hubei and its capital Wuhan — a city of 11 million people — on virtual lockdown.

Mi said the proportion of confirmed cases who were critically ill had fallen to 21.6% on Saturday, from 32.4% on Jan. 27. He said this showed the authorities were able to treat patients more quickly, preventing cases from becoming critical.

Mark Woolhouse, Professor of Infectious Disease Epidemiology at Britain’s University of Edinburgh, said if the numbers suggested the epidemic has peaked in Hubei, “then this would be encouraging news for the rest of the world too.”

But he added: “We should be cautious though; it could simply be that reporting is not keeping up with events in circumstances where the health services are under enormous pressure.”