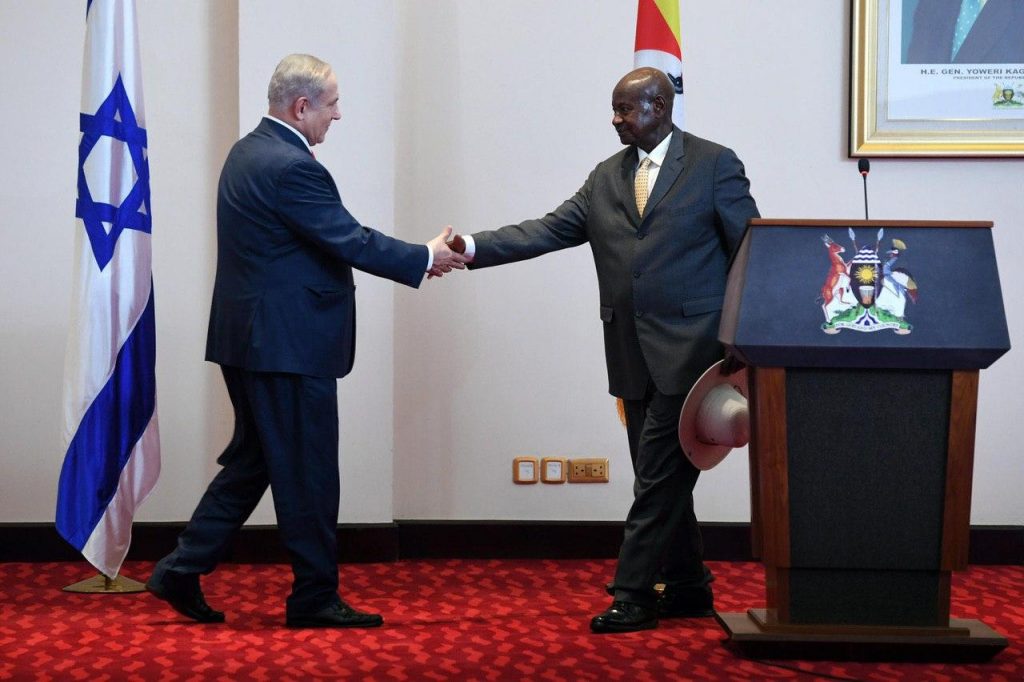 A surprise meeting between Sudan’s leader and Prime Minister Binyamin Netanyahu stirred controversy in Sudan on Tuesday, with the government saying it wasn’t notified ahead of time and critics lambasting the talks on social media.

Others said the meeting would improve Sudan’s standing with the United States and help Khartoum shed its pariah image. For Israel, it was a major diplomatic breakthrough with an Arab African state, two days after the Arab League rejected President Donald Trump’s Mideast plan.

The Uganda meeting between Gen. Abdel-Fattah Burhan, the head of Sudan’s transitional administration, and Netanyahu was kept secret but grabbed headlines late Monday when the Israeli leader announced the two had begun talks on normalizing relations between their countries.

Sudan is desperate to lift sanctions linked to its listing by the U.S. as a state sponsor of terror — a key step toward ending its isolation and rebuilding the economy after the popular uprising last year that toppled autocrat Omar al-Bashir and installed the joint civilian-military Sovereign Council, headed by Burhan.

But Khartoum is also a longtime member of the Arab League and joined other members in rejecting Trump’s plan at a meeting in Cairo on Saturday. The U.S. plan would grant the Palestinians limited self-rule in parts of the West Bank while allowing Israel to annex all its settlements there and keep nearly all of east Jerusalem.

H.A. Hellyer, a senior fellow at the Royal United Services Institute in London, said Khartoum runs the risk of damaging relationships with the wider Arab world — as well as opposition at home for even inching towards normalization with Israel.

“It’s a cynical choice,” Hellyer said. “Khartoum is in a very bad position, and seemingly expects little help vis-à-vis the U.S. from its Arab brethren.”

From Uganda, Netanyahu tweeted: “History!” while his office said the meeting with Burhan came at the invitation of Uganda. The statement said Netanyahu “believes that Sudan is moving in a new and positive direction” — an apparent reference to a possible removal from the U.S. terror list.

“We agreed to begin cooperation that will lead to normalization of relations between the two countries,” Netanyahu said.

Palestinian official Saeb Erekat called the Uganda meeting a “stab in the back of the Palestinian nation and a deviation from the Arab consensus.”

For Israel, there are several upsides beyond the optics of establishing relations with another Arab country and burnishing its diplomatic credentials. Israel expects to be granted approval to fly over Sudanese airspace, which would greatly shorten flight times to South America, and also hopes it can repatriate the more than 8,000 Sudanese asylum seekers in Israel.

U.S. Secretary of State Mike Pompeo welcomed the Burhan-Netanyahu meeting and “thanked the Sudanese leader for his leadership in normalizing ties with Israel,” according to the State Department.

In a phone call a day earlier, Pompeo had invited Burhan to visit the U.S. later in the year. The State Department said Pompeo and Burhan “underscored their shared desire to improve Sudan’s active participation in the region and international communities and their commitment to work towards a stronger, healthier U.S.-Sudan bilateral relationship.”

On social media, some Sudanese denounced the meeting, accusing Burhan of trying to get on the Trump administration’s good side through Israel. Others applauded, arguing that it was good for Sudan’s future.

“Our interest is above everything and Sudan first,” tweeted Mubarak Ardol, former spokesman of a rebel faction of Sudan People’s Liberation Movement-North that was part of the pro-democracy movement that led to al-Bashir’s ouster.

Prominent activist Amjed Farid said Burhan had no mandate from the people of Sudan to offer Netanyahu a “promise of that” which is not his to give.

Information Minister Faisal Mohamed Saleh, who also serves as the government spokesman, said the Cabinet learned of the meeting through the media and was not consulted beforehand. “We will wait for clarifications after” Burhan returns home from Uganda, Saleh said.

A senior Sudanese military official said the meeting was orchestrated by the United Arab Emirates and aimed at helping remove Sudan’s terror listing, which dates back to the 1990s, when Sudan briefly hosted Osama bin Laden and other wanted terrorists.

The official, speaking on condition of anonymity because he was not authorized to talk to the media, said Burhan agreed to meet Netanyahu because officials thought it would help “accelerate” the process of being removed from the terror list. He said only a “small circle” of top officials in Sudan, as well as Saudi Arabia and Egypt, knew about the meeting.

Sudan hosted the Arab League summit after the Six Day War. That summit became famous for establishing the “three no’s”: No to peace with Israel, no to recognition of Israel and no to negotiations with Israel.

That consensus broke down when Egypt signed a peace treaty with Israel in 1979, and has further eroded in recent years as Israel has improved ties with Gulf Arab nations that share its concerns about Iran.