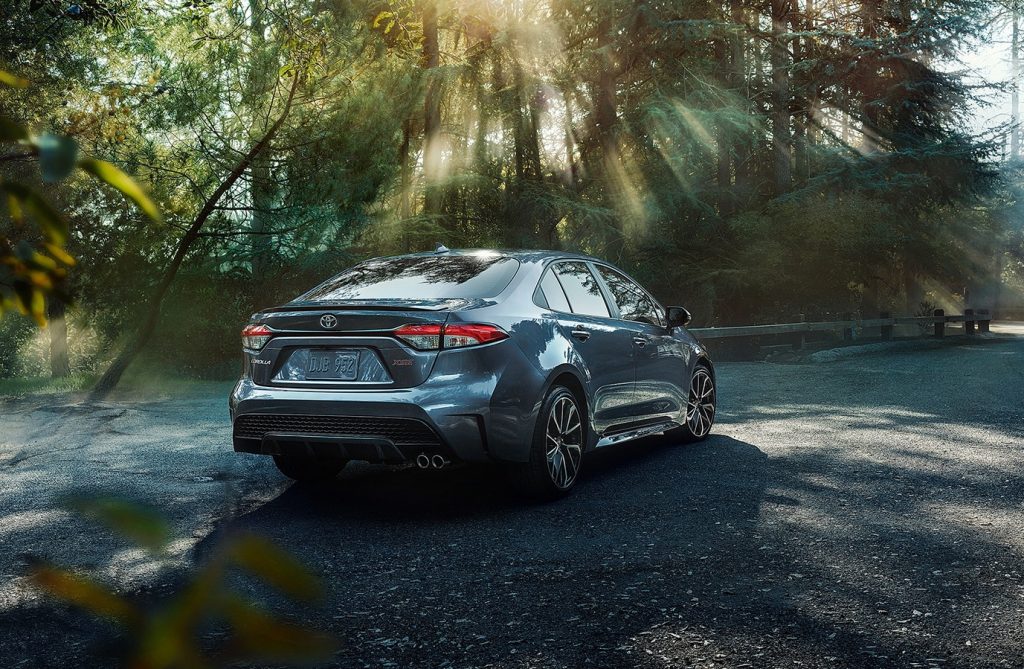 Did you know that a corolla is “the ring of petals around the central part of a flower?” And here I thought it was a ubiquitous four-door compact car. But, of course, it’s both. It just depends on whether you capitalize the word or not.

Yet the Corolla with the capital C is the bestselling nameplate in the world, with more than 46 million copies sold since 1966. Redesigned last year using Toyota’s New Global Architecture that’s employed for the Camry and RAV4, the Corolla is offered in comfort-oriented L, LE, and XLE grades with a 139-horsepower 1.8-liter engine from the previous-generation Corolla, or in sportier SE and XSE trim with a more powerful 169-horsepower 2.0-liter four-cylinder engine.

But now there’s a third option: the first-ever Corolla Hybrid, powered by a 1.8-liter four-cylinder gas engine and a 53kW electric motor mated to the continuously variable automatic transmission that generates 121 horsepower and returns EPA-rated fuel economy of 52 mpg in combined city/highway driving. That’s far more efficient than the 31-34 mpg seen in other Corollas.

But the Corolla Hybrid’s real competition comes from the Prius, which starts at $24,325, $1,225 more than the Corolla Hybrid’s $23,100 base price. Considering they both use the same drivetrain, and the Prius returns fuel economy between 50 and 54 mpg depending on model, the Corolla holds an advantage over the Prius because it lacks Prius’ peculiar alien spacecraft styling. The Corolla Hybrid is far more visually appealing, with its lower, leaner look accentuated by gently flared fenders and capped with LED headlamps. Its clean, energetic edge is far easier to live with and, unlike the Prius, doesn’t constantly remind you of its hybrid nature. It’s for drivers who are secure enough to not shout their environmental credibility to the world; it’s not a defining part of their identity.

Toyota was nice enough to send a Prius along for comparison, but it was actually the Prius Prime Plug-In Hybrid, meaning fuel economy surpassed that of the Corolla by a considerable margin, as did its $28,705 starting price, a $5,605 premium.

Looks aside, the two had differences that favor the Corolla.

While both seat five, the Corolla boasts a far more useable trunk, the cargo area, resulting in a very shallow trunk that goes far forward. Consider it the ultimate cargo hold for transporting pizza or yoga mats.

Next comes the driveline. The Prius Prime delivers 25 miles of pure electric driving, and is rated at the equivalent of 103 mpg. But when it reverts to standard hybrid mode, it returns 54 mpg, close to that of the Corolla Hybrid. According to the EPA, you’ll spend 20% less fueling the Prius Prime – $600, rather than $750 – but given the Prime’s price premium, the Corolla comes out ahead in affordability. In addition, the Prius Prime feels ethereal in its responses, delivering performance without a scintilla of feel or emotion. Its otherworldly aura is augmented by the bizarre styling.

Thankfully, the Corolla Hybrid feels and acts like its conventional siblings, although it’s livelier off the line, thanks to the electric motors’ added punch. Toyota equips the Corolla Hybrid with Eco, Normal and Sport driving modes, although there seems to be little difference between Normal and Sport. Eco is only for those with a death wish; this car’s acceleration is leisurely enough. Although it’s far from the fastest compact, it is among the most fuel-efficient. A weeklong test drive returned 49 mpg despite a heavy right foot. Like other Corollas, a MacPherson strut front suspension, multilink rear suspension and a pair of stabilizer bars minimize body roll while returning a fairly comfortable ride, although it seems more abrupt over rough stuff than its siblings, possibly because of its added weight.

The interior is basically that of a Corolla LE, although that’s not as bad as it sounds. The front passengers sit low, with a short but supportive front seat cushion. Head and legroom are good up front. Back seat legroom is adequate, but headroom is tight due to an encroaching sunroof, so try before you buy.

All this goodness results in an automotive flower that is more a daisy than an orchid.

It’s no flower, but it’s a heck of a Corolla.