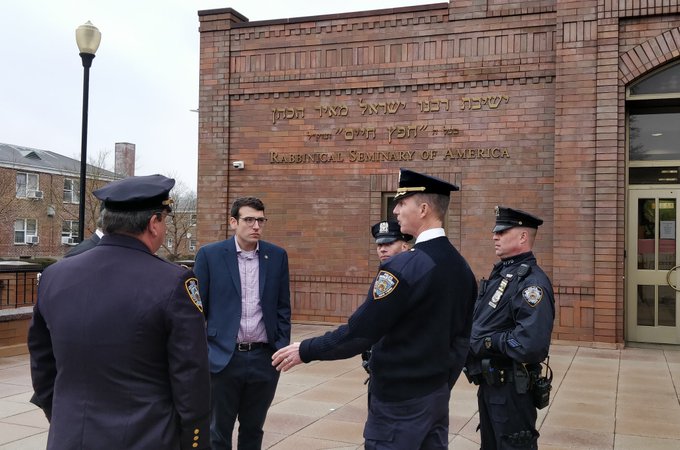 Security for Jewish institutions — shuls, schools, community centers and organizations — has understandably been at the forefront of many minds and agendas in recent months. Agudath Israel of America, where I serve as public affairs director, has been instrumental in securing considerable federal and state funds to help protect places where Jews gather.

I remind readers that I write in this space only as an individual, not in my organizational role. In that role, though, I’ve fielded a number of inquiries from the media and public about the security issue. Two recent ones stand out, because they made me think — something that, while not always easy, is highly recommended.

The first communication was from an irate gentleman who wanted to know why, if the Agudah has in fact helped secure security funding for schools like the one his children attend, he was being asked by the school to contribute to a parents’ fund to upgrade the institution’s safety, presumably for yet additional security measures. I suggested to him that his question, a reasonable one, would best be directed to the school administration.

The second was from a rightly respected mechaneches whom I’ve known for many years and who just wanted to sound out my opinion about whether certain safety concerns or actions, like some being considered by her children’s basically secured school, might be going a bit overboard.

As I say, the two questions made me think, about the fundamental Jewish concept called bitachon.

“Trust,” is how the word is usually translated, but, of course, it means something both more subtle and more weighty. It means keen recognition of the fact that, while we are enjoined to make normative efforts to earn our livings, raise our children and accomplish our goals in life — including protecting ourselves from potential harm — ultimately it is not our actions that yield us any success we experience, but rather the will of Hashem.

Consider a thought experiment: A shul, worried by recent acts of violence against Jews, hired an armed guard to stand at its entrance, and a would-be intruder with a weapon is thwarted by the alert and quick sentry. Needless to say, the fellow deserves the congregation’s thanks. And hiring him may have been the right thing to do, part of the proper hishtadlus — human effort — to be made these days.

But what in fact saved the mispallelim?

Hint: The answer isn’t “the guard.”

Hiring the man, assuming it was a necessary part of hishtadlus, may have been part of the collective merit that brought about the happy ending, or the attack’s failure may have been merited by other good deeds. But what protected the shul-goers was not, in the end, any mortal guard, but the Guardian of Yisrael.

Recognizing — internalizing — that Jewish truth is imperative. In fact, it is essential to our safety.

Harav Dessler (Michtav MeEliyahu, first chelek, page 188, in the original edition) cites the common expression “We’ve left nothing to chance” and calls it a contemporary version of the boast “My strength and the might of my hand has created this victory for me” (Devarim, 8:17).

He calls the “leave nothing to chance” attitude one “of conceit, apikorsus and idolatry.” And he asks all who consider themselves maaminim to consider if, perhaps, “even in their own hearts” there might dwell some residue of such kefirah (his word).

Can we even think that an armed guard is a true protection against an intruder? Can’t a clever terrorist plan, chalilah, to shoot a guard from an unseen perch before proceeding with his nefarious aim? A pair of guards might be hired, to avoid that possibility. But what if there are two terrorists acting in tandem, one for taking out each of the guards? As the Gemara says in a different context, ein l’davar sof, “there’s no end” — here, to the security “arms race.”

Most of us would readily concede that hiring a small militia to surround a shul and arranging for police helicopters to hover constantly overhead would be an unreasonable choice, a misunderstanding of hishtadlus and an insult to bitachon.

And most of us would consider, at least in our day, locks on a large shul’s doors to be prudent. When it comes, though, to armed guards — and certainly armed congregants — or to bulletproof glass or to evacuation drills, things are not necessarily so simple. More, here, is not better; in fact, as per Rav Dessler, it’s worse.

Properly balancing bitachon and hishtadlus is a complex venture, one best left to poskim and manhigim with the Torah knowledge, experience and sensitivity to guide us.

But hitting the right such balance, which may, of course, yield different decisions in different times and in different places, is vitally important.