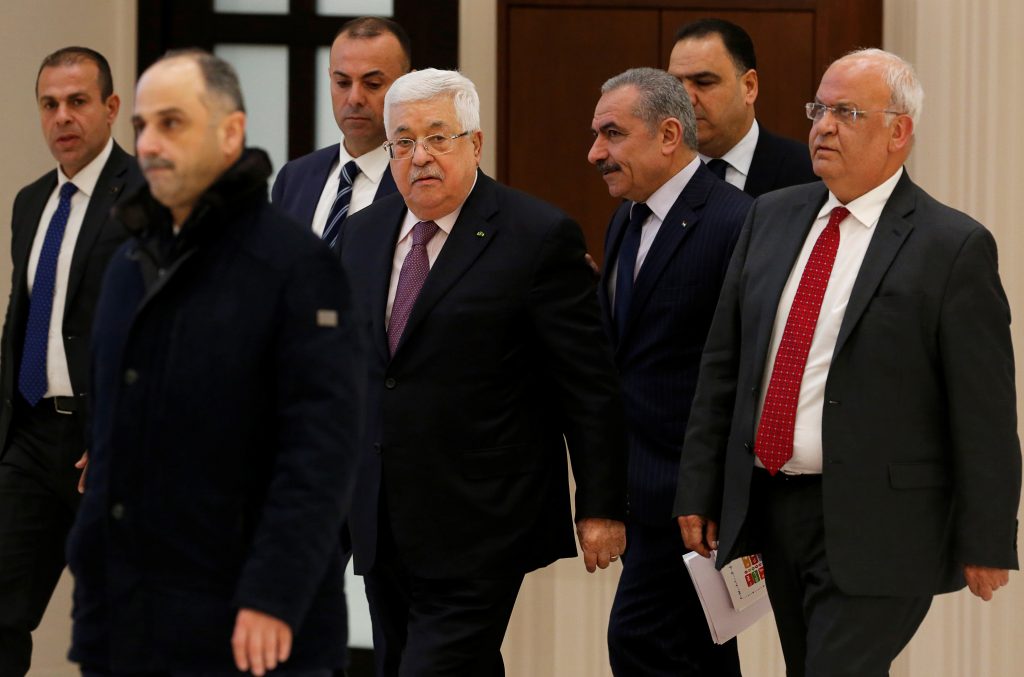 World reaction to the long-awaited publication of the U.S. peace plan was predictably mixed on Tuesday, with the Palestinians and Arab countries denouncing it, while Europe seemed willing to give Trump’s peace a chance.

The Arab League said it will convene an urgent meeting over the weekend in response to President Donald Trump’s Israeli-Palestinian peace plan, according to an AFP report.

The extraordinary meeting comes in reply to a Palestinian request to the League, which is headquartered in Cairo.

Palestinian Authority President Mahmoud Abbas called it a “conspiracy” and that his people’s rights “are not for sale,” presumably a reference to the $50 billion economic recovery program included in the deal.

Ramallah refused to accept it.

Iran, Hamas and Hezbollah all condemned it.

Jordan’s Foreign Minister Ayman Safadi warned of “dangerous consequences to unilateral steps by Israel, which threaten to create a new reality on the ground.”

However, reaction in Egypt and Europe was decidedly more temperate.

Egypt said that both Israelis and Palestinians should study the 80 pages of proposals, Reuters reported.

Cairo called on both sides to open channels of dialogue and resume talks with the U.S. serving as a mediator.

U.N. Secretary-General Antonio Guterres says the United Nations remains committed to supporting Palestinians and Israelis in resolving their conflict on the basis of U.N. resolutions, international law and bilateral agreements.

He says the U.N. is also committed to realizing the vision of two states “living side by side in peace and security within recognized borders, on the basis of the pre-1967 borders, according to his spokesman.

U.N. spokesman Stephane Dujarric said the secretary-general saw the announcement of the U.S. plan for the Middle East, which was presented Tuesday by President Donald Trump.

Trump’s plan calls for the creation of a State of Palestine with its capital in eastern Yerushalayim while recognizing Israeli sovereignty over major settlement blocs in Yehudah and Shomron, and was immediately rejected by Palestinian President Mahmoud Abbas.

Dujarric said: “The position of the United Nations on the two-State solution has been defined, throughout the years, by relevant Security Council and General Assembly resolutions by which the Secretariat is bound.’

In Europe, the High Representative of the Union for Foreign Affairs and Security Policy Josep Borrel said that the E.U. will study the Deal of the Century and that it “urges both sides to show a sincere commitment to a two state solution,” Chanel 13 reported.

British Foreign Secretary Dominic Raab commented: “This is clearly a serious proposal, reflecting extensive time and effort… We encourage them (the Israeli and Palestinian leaders) to give these plans genuine and fair consideration, and explore whether they might prove a first step on the road back to negotiations.”