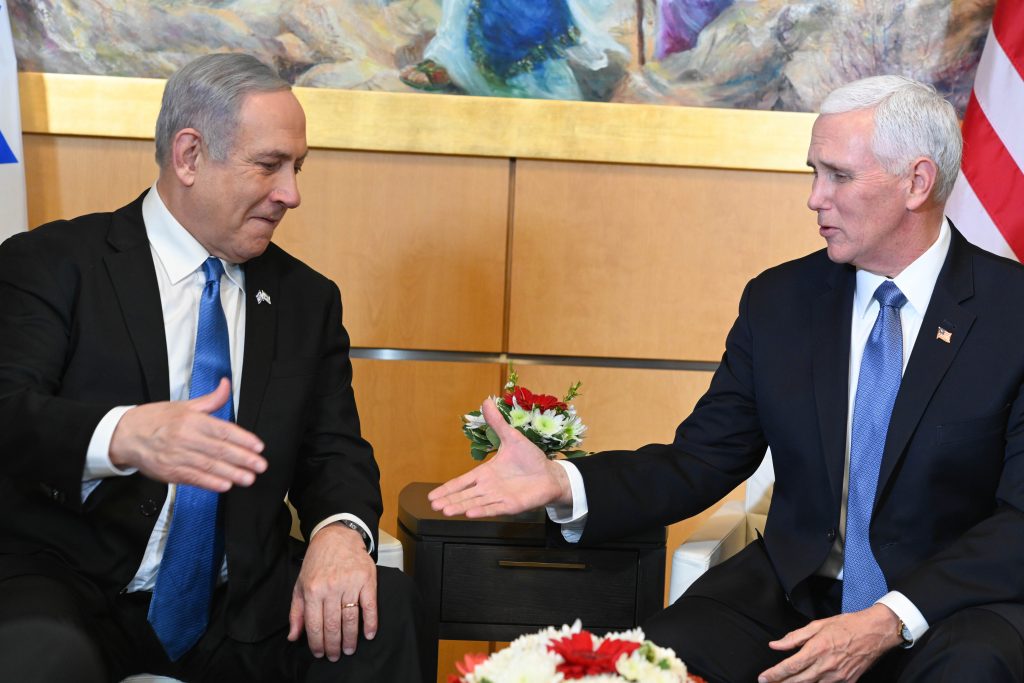 Both Prime Minister Binyamin Netanyahu and Blue and White head Benny Gantz left for Washington Sunday, each for their respective meetings with President Donald Trump. Netanyahu had originally been set to leave Monday, but advanced his plans by a day.

The two are traveling to Washington after an invitation by Trump to participate in a ceremony Tuesday, in which details of the “deal of the century” peace plan are to be revealed. Netanyahu was invited on Thursday by U.S. Vice-President Mike Pence, who was in Israel to participate in the International Holocaust Forum. Netanyahu in turn suggested inviting Gantz, and Trump asked both of them to come. Gantz did not immediately accept, but on Saturday night announced that he would go.

However, his meeting with Trump is set for Monday, and it will be a private discussion in the White House. The Knesset Channel reported Sunday that Gantz’s final decision to travel to Washington was made 20 minutes before he announced he would do so Saturday night.

According to the report, Gantz was informed that he would be seated in the audience, while speeches would be made by Trump and Netanyahu. Not wishing to appear to be a “second fiddle,” he informed Washington officials that he would not attend under those circumstances. It was Mideast negotiator Jared Kushner who paved the way for Gantz’s meeting with Trump, enabling him to announce his visit, the report said. Diplomatic sources said that Trump would also meet with Netanyahu privately on Monday.

While details of the plan are not known, Israeli diplomats who have been involved in discussions regarding the plan say that Israel is not going to be required to make many more concessions than it has already made.

Channel 12 said that the plan includes recognition of Yerushalayim as Israel’s capital, and gives the option for Israeli sovereignty on all the settlement blocs, at the very least. The plan does not call for the establishment of a Palestinian state at this time, but reserves the option for one to be established in the future – if the Palestinians accept the conditions of the plan, which almost undoubtedly will include recognizing Israel as a Jewish state, something the Palestinian Authority has refused to do until now.

Speaking Motzoei Shabbos, Netanyahu said that the plan was a “one-time opportunity that cannot be missed. We have the greatest friend Israel has ever had in the White House. I have been discussing our security and national needs with President Trump and his staff for three years, including all the issues that need to be part of a settlement. I have found a team that pays great attention to our needs. I am very hopeful that we are on the verge of a historic moment.”