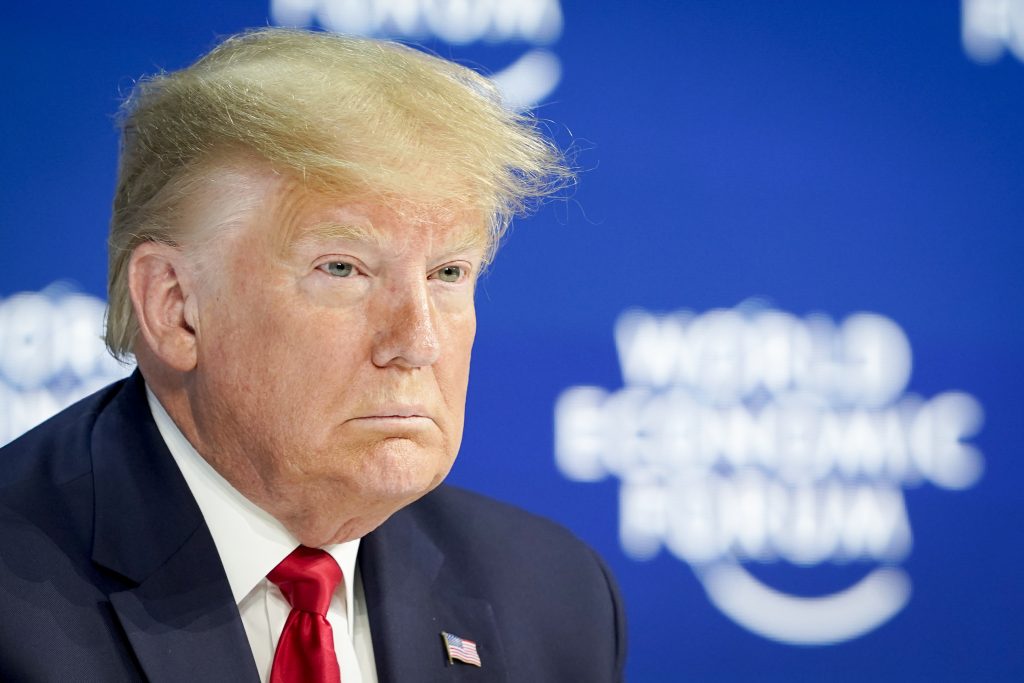 President Donald Trump looked past the impeachment drama unfolding in Washington on Tuesday, turning his speech at an economic forum in the Swiss Alps into an unabashed sales pitch for the “blue-collar boom” in the U.S. economy that he says took place on his watch.

Trump kept his focus on the economy in his address, never mentioning impeachment during half an hour on stage at the annual World Economic Forum in Davos, Switzerland.

But then later in the day, it came: “READ THE TRANSCRIPTS!” Trump tweeted on the way back to his hotel in response to the impeachment trial getting underway in the U.S. Senate.

Trump’s two-day stay in Davos is a test of his ability to balance anger over being impeached with a desire to project leadership on the world stage. He reminded the audience of business and government leaders that when he spoke here in 2018, “I told you that we had launched the great American comeback.”

“Today I’m proud to declare the United States is in the midst of an economic boom, the likes of which the world has never seen before,” the president said.

The economy grew 2.9% in 2018 — the same pace it reached in 2015 under President Barack Obama — and hasn’t hit historically high growth rates, but it is in the midst of the longest expansion in U.S. history.

Trump’s upbeat characterization of the U.S. state of play represented a marked shift in tone from the early days of his administration, when he sketched a vision of “American carnage” and promised to end it with a nationalist “America First” approach to governing.

American economist Kenneth Rogoff took issue with Trump’s comments, although he said some of the president’s claims about the strength of the U.S. economy are true. But Rogoff noted that the economy wasn’t doing badly when Trump took office. “It’s been a good 10 years and his three years probably better than expected,” Rogoff said, adding that he thought Trump was careful to keep any comments about climate change to a minimum to avoid getting booed.

Climate issues are a main theme at the forum, and the phrase “Act on Climate” was written in the snow at the Davos landing zone where Trump’s helicopter set down.

His lone reference to climate issues in the speech came when he announced the U.S. would join a World Economic Forum initiative to plant 1 trillion trees worldwide. Afterward, in an apparent reference to those who warn about climate change, Trump said the world must “reject the perennial prophets of doom and their predictions of the apocalypse.”

Trump is pulling the U.S. out of the landmark 2015 Paris climate agreement under which nearly 200 nations set goals to curb emissions of greenhouse gases. Trump has called the Paris accord an unfair economic burden to the U.S. economy.

Climate activist Greta Thunberg, who has been criticized by Trump, said world and business leaders aren’t taking the threat of global warming seriously.

“Planting trees is good of course but it’s nowhere near enough,” said the 17-year-old Thunberg.

Despite the impeachment drama playing out at home, Trump appeared in good spirits throughout the day, joking with the new president of the European Commission about her reputation as a “tough negotiator” and describing his “great relationship with the leader of Pakistan.”

But he didn’t pass up opportunities to comment on his impeachment when questioned by reporters.

At a dinner with several dozen international business executives, Trump fingered a colorful soccer ball given to him by Gianni Infantino, leader of the international soccer federation, and invited the executives to go around the table one by one and introduce themselves. Before the CEO of Swiss-based pharmaceutical company Novartis sat back down after introducing himself, Trump joked: “Keep those prices down, please.” Trump has promised to lower the cost of prescription drugs for U.S. consumers.

His speech to the forum seemed aimed not just at his audience in the hall but toward the millions of Americans who will decide in November whether he deserves a second term.

“America is thriving. America is flourishing and yes, America is winning again like never before,” Trump said, referencing a newly signed trade deal with China and a pending U.S. trade agreement with Mexico and Canada that he has portrayed as a windfall for farmers. He spoke of record low unemployment, stock-market gains and millions removed from the welfare rolls.

Nobel Prize-winning economist Joseph Stiglitz criticized Trump for failing to address climate change beyond a commitment that the U.S. will join the trees initiative.

Trump’s appearance at the forum ends Wednesday when he travels back to a Washington that’s consumed by the impeachment trial.

Trump met Tuesday with the Davos forum’s founder and the new European Commission president, Ursula von der Leyen, the first woman to hold the position. Trump zeroed in on her reputation as a tough negotiator, saying that was “bad news for us.”

Trump wants to reach a trade agreement between the U.S. and European Union and has threatened to apply tariffs to their auto imports if that doesn’t happen, claiming the U.S. has been treated unfairly by its European allies.

“If we’re unable to make a deal, we will have to do something, because we’ve been treated very badly as a country for many, many years on trade,” he said. “They know they have to do something and if they’re fair we’re not going to have a problem,” he added.