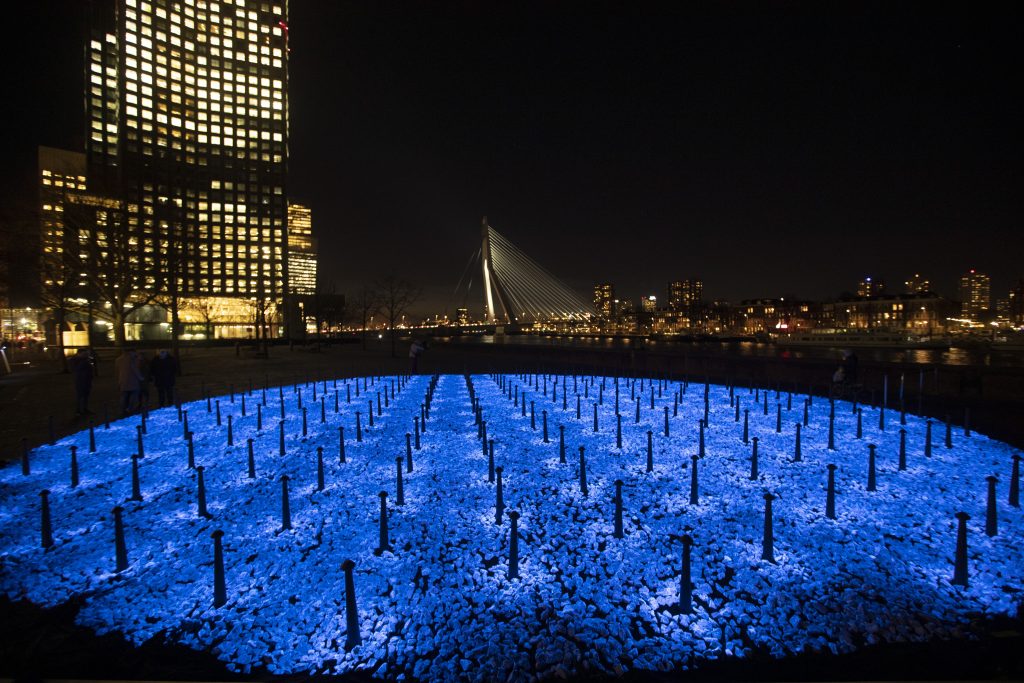 A new memorial was unveiled Thursday made up of 104,000 light-emitting stones commemorating Dutch victims of the Holocaust ahead of the 75th anniversary of the liberation of the Auschwitz Nazi concentration camp.

Artist Daan Roosegaarde said he drew inspiration for the work called “Levenslicht,” or “Light of Life,” from the Jewish custom of placing stones on or near a grave to honor the dead.

The stones — one for each Dutch victim of the Holocaust — were displayed in Rotterdam on the banks of the River Maas and lit up when bathed in ultraviolet light.

They are to be spread around the country to more than 170 municipalities from which Jews, Roma and Sinti were deported during the World War II Nazi occupation of the Netherlands.

“The idea is to honor all the citizens, from all over the Netherlands, who were taken from their homes, deported and murdered,” said Gerdi Verbeet, head of the commemoration organization National Committee for May 4 and 5.

Later in the year, much of the Netherlands will celebrate the 75th anniversary of its liberation from Nazi occupation; some parts of the country were freed earlier.

“You can’t celebrate 75 years of freedom without standing still to consider the people who did not live to see liberation,” Verbeet said.

The memorial uses invisible ultraviolet light to make the stones impregnated with fluorescent pigments light up in the darkness every few seconds. The stones will be displayed around the country from Jan. 22-Feb. 2.

The memorial was unveiled less than two weeks before world leaders and Holocaust survivors will gather at Auschwitz on Jan. 27 to commemorate the 75th anniversary of the liberation of the extermination camp.