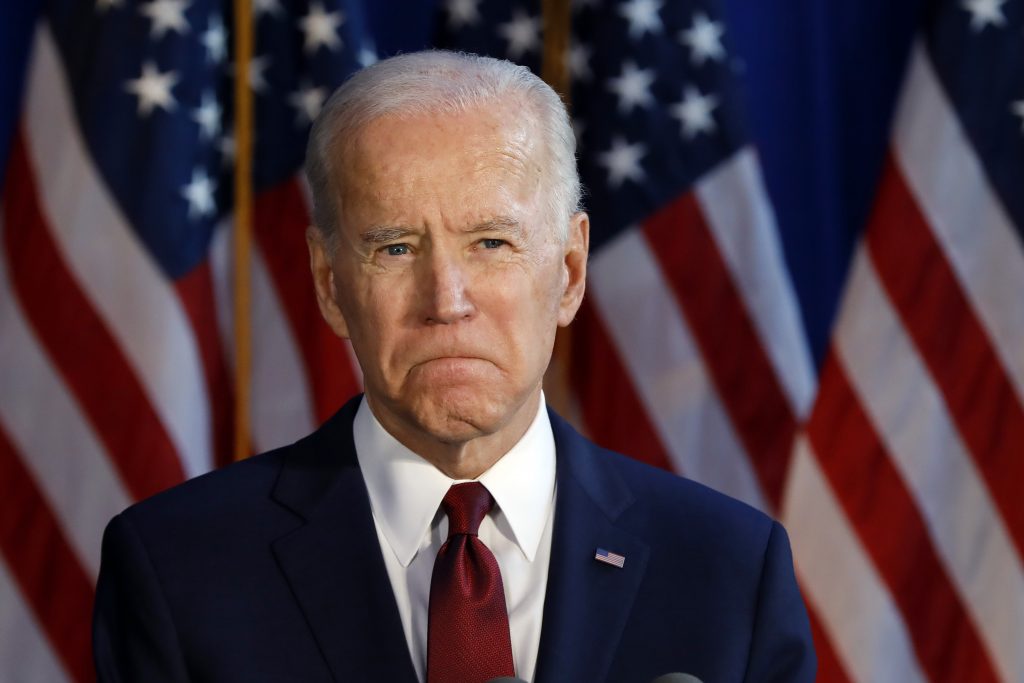 Democratic presidential candidate Joe Biden said Tuesday that President Donald Trump’s escalation of tensions with Iran proves him to be “dangerously incompetent” and puts the U.S. on the brink of war.

Speaking in New York, Biden said Trump used a “haphazard” decision-making process to order the killing of Iranian Gen. Qassem Soleimani and has failed to communicate the rationale to Congress or U.S. allies around the world. Biden said Trump instead offered “tweets, threats and tantrums” that prove the Republican president to be “dangerously incompetent and incapable of world leadership.”

“Democracy runs on accountability,” Biden said, urging Trump to consult with Congress on acts of war, as required by the Constitution. “No one wants war. But it’s going to take hard work to make sure we don’t end up there accidentally.”

The former vice president’s remarks were part of his second major foreign policy address of the campaign. This one comes less than a month before the Feb. 3 Iowa caucuses begin Democrats’ 2020 voting, with Biden attempting to highlight his international experience in contrast both to Trump and his Democratic competitors.

But the moment presents challenges for the 77-year-old candidate with nearly five decades in Washington. While his resume is longer than any Democratic presidential rival’s, it comes with complications.

Progressives hoping to make the world less militaristic point to Biden’s 2002 vote authorizing the U.S. invasion of Iraq, suggesting that muddies his warnings about another Middle Eastern war. Alternately, Trump and Republicans cast Biden as indecisive or weak, seizing on his opposition to the 1991 U.S. mission that drove Iraq out of Kuwait and his reluctance about the raid that killed Sept. 11 mastermind Osama bin Laden in 2011, when Biden was President Barack Obama’s No. 2.

Biden himself has been inconsistent in his pitch to voters, seemingly confident that searing criticism of Trump and implicit contrasts with less-seasoned Democrats are enough.

“I’ve met every single world leader” a U.S. president must know, Biden tells voters at some stops. “On a first-name basis,” he’ll add on occasion. The Biden campaign’s most viral moment was a video last month, titled “Laughed At,” showing world leaders mocking Trump at a Buckingham Palace reception held during a NATO summit in London.

Biden told reporters last month that foreign policy isn’t in his Democratic opponents’ “wheelhouse,” even if they “can learn.” Demonstrating his knowledge, Biden veered into explaining the chemistry and physics of “SS-18 silos,” old Soviet missiles. “It’s just what I’ve done my whole life,” he said.

He’s since touted endorsements from former Secretary of State John Kerry and members of Congress with experience in military combat and intelligence.

Yet Biden doesn’t always connect the dots with an explicit appeal to voters.

In Iowa last weekend, Biden called the Iran crisis “totally of Donald Trump’s making,” tracing Soleimani’s killing back to Trump withdrawing from a multilateral deal in which Iran had agreed to curtail its nuclear program. As he said again Tuesday in New York, the pact “was working, serving America’s interests and the region’s interests.”

Biden told another Iowa audience that Americans need “a president who provides a steady leadership on Day One,” but he never discussed his role in the Iran deal or Obama’s foreign policy generally.

“Foreign policy, commander in chief is a big deal to people,” he said last month, less because of a single issue and more because of Trump. “They just know something’s not right. It’s uncomfortable.”

Biden in July offered what had been his sweeping foreign policy declaration to date, with a speech touting the U.S. as the preeminent world power but one that must lead international coalitions and focus on diplomacy. He pledged to end “forever wars,” but did not rule out military force. He made clear he values small-scale operations of special forces while being more skeptical of larger, extended missions of ground forces.

His advisers believe that reflects most Americans. “They don’t want the United States to retreat from the world … but they also don’t want us overextended without any rational strategy or exit plan,” said Tony Blinken, Biden’s top foreign policy adviser, who has worked with him since he was the Democratic leader on the Senate Foreign Relations Committee.

As vice president, Biden was at Obama’s side for every major national security decision for eight years. Biden led the administration’s efforts to help Ukraine counter Russian aggression and on Iraq as the administration moved to bring the war it inherited there to an end.

But Biden wasn’t always in lockstep with Obama on major issues. He was among the advisers who argued against the bin Laden raid. Biden’s explanation has changed over the years, varying from saying he recommended Obama wait for clearer identification of bin Laden at the Pakistan compound where he was killed to later saying he privately told Obama to go ahead. Blinken said Biden was never against pursuing bin Laden, as some Republicans say. Recalling how Biden immediately relayed his final private conversation with Obama, Blinken said Biden told the president to “trust your instincts.”

Biden also lost an initial debate on Afghanistan shortly after Obama took office. Biden opposed sending surge forces, pushing instead for a focus on counterterrorism that would have required a smaller military footprint on the ground. Obama ultimately deployed 30,000 troops to Afghanistan.

That could be viewed as a lesson learned after Biden initially voted to support Bush’s 2002 request to use force in Iraq. Blinken said, though, that didn’t necessarily mean Biden ever changed philosophy. His 2002 vote, Blinken said, was based on the president arguing he needed war power only as leverage for Iraqi leader Saddam Hussein to accept international weapons inspectors. That worked, Blinken said, then Bush decided to “go to war anyway.”

Ultimately, Biden and his team believe voters are more interested in candidates’ overall profiles than in litigating old debates.

“At every major turning point in history, he’s played a central role,” Blinken said. “There is now a premium on exactly that kind of experience, and the wisdom and judgment that flow from it.”