Community On the Same Page, With One Heart
Community 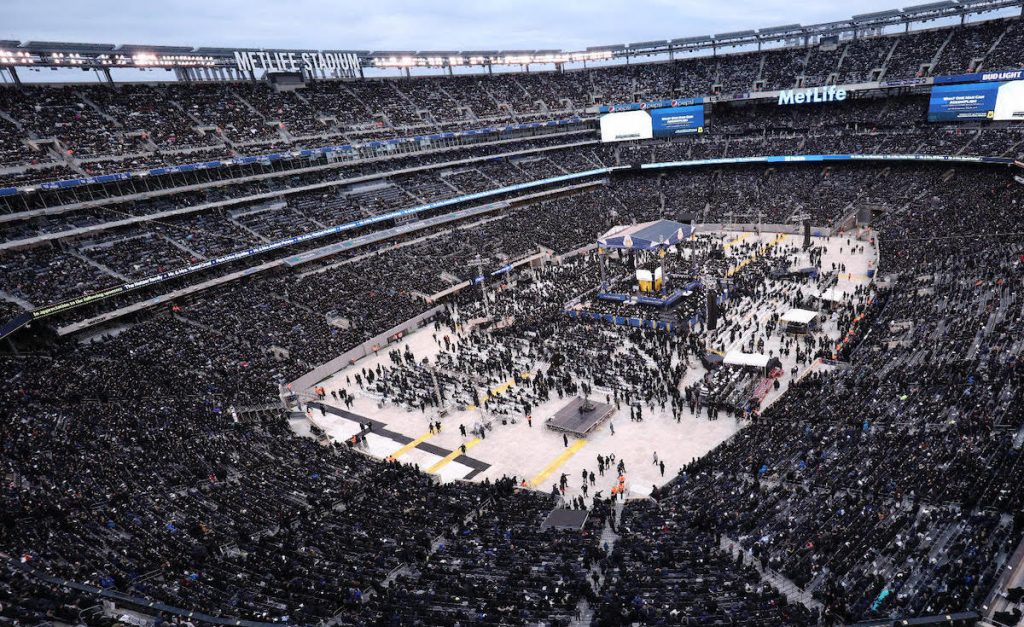 They braved the frigid weather and the traffic, but left exhilarated with their spirits soaring — those who taught, those who finished, those who facilitated their husbands’ learning, and those who came to be inspired. They received congratulations for finishing, encouragement to begin again, or inspiration to join those who already are lomdei Daf Yomi. But perhaps most importantly, they became one — united as part of Klal Yisrael in the quest for limud haTorah and kvod Shamayim.

The program began with Minchah, led by Leizer Scheiner, followed by heartfelt Tehillim for those in Klal Yisrael who need yeshuos, led by Harav Shlomo Mandel, shlita, Rosh Yeshivah of Yeshiva of Brooklyn. Tears flowed freely as the gathering of hundreds of thousands of Yidden prayed passionately for those who seek refuos, shidduchim, parnassah and the various needs of the individual and the nation.

Harav Aryeh Malkiel Kotler, shlita, Rosh Yeshivah of Beth Medrah Govoha of Lakewood, described how coming together to celebrate the simchah of a Siyum haShas of thousands of lomdei Daf Yomi is not only a personal simchah of the individual, but indeed a simchah of the entire Klal Yisrael.

He quoted his grandfather, Hagaon Harav Aharon Kotler, zt”l, as saying that “Morashah kehillas Yaakov — Torah is a yerushah for all of Klal Yisrael, not only for the one who learned it.

Rabbi Leibish Lish, a fifth-grade Rebbi in Yeshiva Karlin-Stolin who was influential in bringing the Masmidei HaSiyum program to many chadarim, made a special presentation when he introduced Shimon Yehudah Brodsky, a young boy who, despite his health difficulties, made a siyum on Maseches Brachos. Rabbi Lish then bentched him to make a siyum on his various treatments and surgeries.

Harav Yaakov Perlow, shlita, the Novominsker Rebbe, mentioned the Gemara in Shabbos (118b-119a) in which Abaye declared that when a talmid chacham made a siyum on just one masechta, he celebrated with a yoma tava, a festival. “How much more when so many tens of thousands of people finish not just one but the entire Shas, what a celebration it is!”

The Rebbe reminded all that we as a nation survived the Greek, the Romans and Babylonian Empires, when no others remain. “What is our secret? Mah ahavti Sorahsecha, this is why we are here today.

“The lomdei Daf Yomi struggled through difficult masechtos, day by day and week by week. They accepted the yoke of Torah; they are the major mechutanim, but they are joined by all lomdei Torah in yeshivos and kollelim who make toil in Torah their entire day. They are our pride and nachas.”

The Rebbe concluded by beseeching our brethren in Eretz Yisrael who are not on the path of Torah, who are nonetheless part of the nation who “are all tzaddikim” to build a life based on yiras Shamayim, and not to remake Yerushalayim Ir Hakodesh in the mold of a secular Hong Kong or the like.

A short video titled “Heroes of the Daf” showed how ordinary Yidden awaken at 5:00 a.m. and are not deterred by 20-degree weather, take no vacation from the Daf, and take along their Gemaras on the train, the plane, and often make sure to complete the Daf before getting to the office.

Harav Yissachar Frand, shlita, one of the event’s keynote speakers, began by describing how the Brisker Rav, zt”l, considered the time of a siyum to be an eis ratzon to give a brachah to a couple to have a child. “If the siyum of one masechta is a shaas rachamim for a child, how much more so is a Siyum HaShas by 100,000 Yidden?” asked Rav Frand. “Now is a time when we can ask the Ribbono shel Olam for the needs of Klal Yisrael, just as we find by the siyum made by Shlomo Hamelech, Hashem told him, ‘Sh’al na …’”

A kollel yugerman moved into an apartment building whose residents were not frum, and he wanted to organize a shiur for his neighbors. When he asked a Gadol what he should teach them, to his surprise the Gadol did not tell him to learn mussar, but rather to teach then Bava Kama.

“Ata lo maamin b’koach haTorah — You don’t have enough faith in the power of Torah” was the answer he received.

A takeaway message from the event was the ability for everyone to take their learning to a new level. Agudas Yisrael compiled a list of no less than 32 different formats to enhance, retain, understand, and be koneh the Daf .

“Make your own plan,” Rav Frand urged the crowd. “Perhaps you could begin a notebook where you write down a haarah or two on every Daf. Your notebook will be a Shas notebook! Or perhaps look up how the Rambam paskens.

“Some may be apprehensive of completing the more difficult masechtos, like Yevamos, Kerisus and Eiruvin. They may ask, ‘Why bother. If I can’t finish, why begin?’”

“Anyone who asks that question doesn’t understand a fundamental truth of life: Perfection is the enemy of good. Half of Shas is better than none. One seder is an accomplishment; one masechta is good, if not perfect. Don’t let perfection be the enemy of good!”

The Masmidei HaSiyum presentation was dedicated by Mr. Moshe Zafir in memory of survivors of the Holocaust, through which 196,000 blatt Gemara, 3.5 million Mishnayos and 8 million pesukim were learned by tinokos shel beis rabban. Rabbi Leibush Lish bentched all the participants to continue and to be mesaymim in the future.

Harav Aharon Schiff, shlita, the Rav of Machazikei Hadas in Antwerp, Belgium, addressed the crowd in Yiddish, and cited the Midrash that says that all the Torah that Yaakov learned and the mitzvos he performed in the house of Lavan danced before him as he approached Esav. “If only we could see groups of Malachim of all the Dafim of Gemara, the 10,000 Yidden who ended Shas and those who gathered here to express their joy of the Torah; the wives who give up their husband’s time and undertake to run the home by themselves to let their husbands learn Torah!”

The Gemara in Brachos tells us how they made a brachah on Har Habayis when they saw all the Yidden gathered there. “The brachah of Chacham Harazim, the One who knows the secrets in their hearts, is explained by Rashi to mean that Hashem knows what is in their hearts, and that desire is what unites them. These feelings of the heart come out when we have an opportunity to gather for such occasions.

“We are gathering together not for drinking, but rather to declare that Hashem is our G-d, and to give kavod for Torah. This is the meaning of Chacham Harazim.”

Rav Schiff ended by quoting the first Belzer Rebbe, zy”a, who noted that although we usually begin a tefillah with the words yehi ratzon, when we begin the tefillah of acheinu kol beis Yisrael, we do not need to mention it, since when Klal Yisrael is together, it is automatically an eis ratzon. We ask and pray to learn Torah, and hope that by the next Siyum we will see the fulfillment of our desires.

In a video message from Hagaon Harav Chaim Kanievsky, shlita, he gave all a brachah not only to learn Shas but to know it, as well.

A Gemara that was printed in the DP camps was presented to Harav Shmuel Kamenetsky, shlita, Rosh Yeshivah of Yeshiva of Philadelphia, with which he would be mesayem. In a most instructive moment of anivus and mentchlichkeit, Rav Shmuel thanked Hagaon Harav Dovid Feinstein, shlita, Rosh Yeshivah of Mesivtha Tiferes Jerusalem, who in his humility gave up the opportunity to be the mesayem and honored Rav Shmuel instead.

Rav Shmuel explained that although it is a zechus to be mesayem, the main thing is not the ending, but rather to begin anew. “The Torah ends with V’zos habrachah, but before we begin the maftir on Simchas Torah, we begin Bereishis, Why? The answer is that in order to understand what a siyum is, we must return to the has’chalah, to starting anew. The simchah is to begin, to come back and to come back, to learn again and again.

Rav Shmuel then emotionally explained some of the words of the Hadran as he ended Shas.

The has’chalah of the next cycle of Daf Yomi was done by Harav Aharon Feldman, shlita, Rosh Yeshivah of Ner Yisrael. Rav Feldman explained that Seder Zeraim teaches us that our fields are not ours, as we have halachos which govern them, and our produce as well is not ours until we say a brachah. “Shma teaches us our lives are all dependent on Hashem. Shas is the blueprint of life; Shma tells us that the purpose of life is to serve Hashem, so it belongs as the first halachos of Torah Sheb’al Peh.

Harav Uren Reich, shlita, Rosh Yeshivah of Woodlake Village in Lakewood, described how the lessons of this week’s parashah, which tells us how the Shevatim broke the news to Yaakov Avinu about Yosef, best capture the sentiments that we should take away from this gathering. “The stunning news of od Yosef chai … only uplifted the spirits of Yaakov when he saw the remez in the agalos that Yosef remembered that they had learned the parashah of eglah arufah before departing to the brothers.”

Rav Reich expounded on the lessons to be gleaned from this and how the Torah of Yaakov must remain with us wherever we find ourselves.

As the crowd davened Maariv with Harav Leizer Ginsburg, shlita, Mirrer Rosh Kollel, the feelings of Ahavah Rabbah, the achdus and the inspiration of the evening permeated the tzibbur. With one heart.