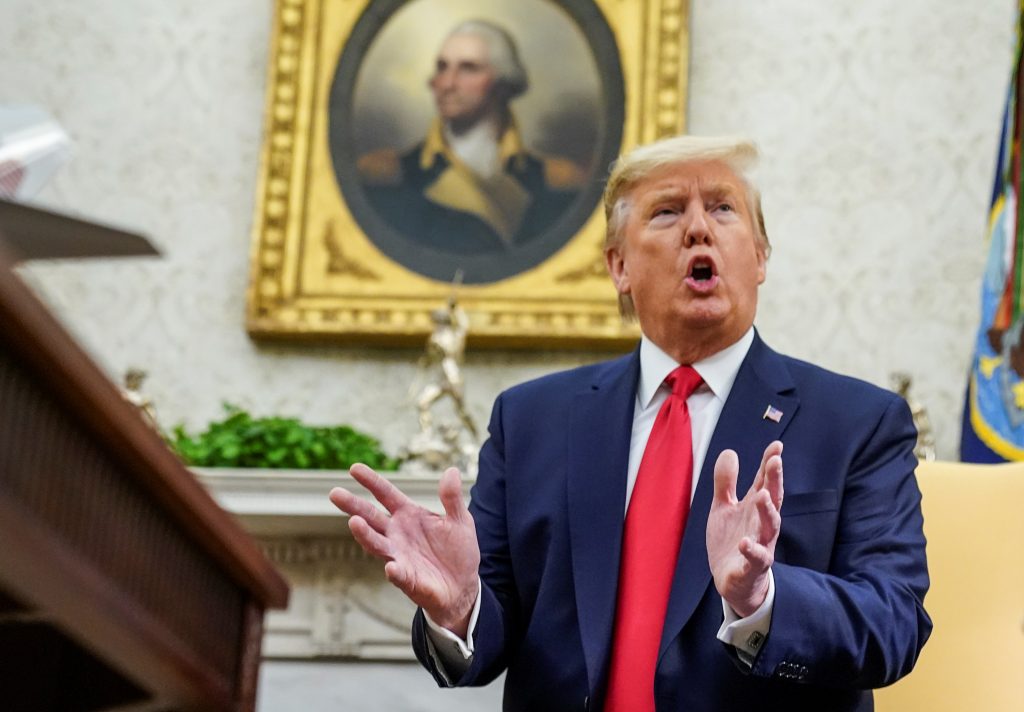 On the eve of his expected impeachment in the U.S. House of Representatives, President Donald Trump accused Democrats of pursuing an “illegal, partisan attempted coup” and declaring war on American democracy as they seek to remove him from office for pressing Ukraine to investigate political rival Joe Biden.

Trump’s remarks came in a letter he signed addressed to House Speaker Nancy Pelosi, released as House lawmakers met to set the rules for debate ahead of Wednesday’s planned vote on two articles of impeachment – formal charges – against Trump.

“This is nothing more than an illegal, partisan attempted coup that will, based on recent sentiment, badly fail at the voting booth,” Trump’s letter stated, alluding to the 2020 U.S. presidential election in which he is seeking another four years in office.

The U.S. Constitution gives the House the power to impeach a president for “high crimes and misdemeanors,” part of the document’s checks and balances among the executive, legislative and judicial branches of the federal government.

The Democratic-led House is expected to pass two articles of impeachment charging the Republican president with abuse of power and obstruction of Congress for his dealings with Ukraine.

“By proceeding with your invalid impeachment, you are violating your oaths of office, you are breaking your allegiance to the Constitution, and you are declaring open war on American Democracy,” Trump added.

House Democrats accuse Trump of abusing his power by asking Ukraine to investigate Biden, a former U.S. vice president and a leading Democratic contender to oppose him in the 2020 election. Trump is also accused of obstructing the congressional investigation into the matter.

“Look, this has been a total sham from the beginning,” Trump told reporters at the White House shortly after his letter was released.

Senate Majority Leader Mitch McConnell on Tuesday brushed aside a Democratic request to call four current and former White House officials as witnesses in a Senate impeachment trial expected next month, sending another clear signal that he expects senators not to remove Trump from office.

In dueling speeches on the Senate floor, McConnell said he would not allow a “fishing expedition” after a “slapdash” House impeachment process, while Senate Democratic leader Chuck Schumer said a trial without witnesses would be a “sham” and suggested Trump’s fellow Republicans favored a cover-up.

Members of the House Rules Committee met on Tuesday over the rules for the debate before the historic vote set for Wednesday in the chamber in which Trump is likely to become the third U.S. president to be impeached.

If the House approves articles of impeachment as expected, it would set the stage for a trial in the Senate, controlled by Trump’s fellow Republicans – on whether to convict him and remove him from office. No president has ever been removed from office via the impeachment process set out in the Constitution, and Republican senators have given little indication of changing that.

Trump has refused to cooperate with the House impeachment process and ordered current and former officials like those mentioned by Schumer not to testify or provide documents.

McConnell took aim at Schumer and Representative Adam Schiff, the chairman of the House Intelligence Committee that spearheaded the impeachment inquiry launched in September.

“So now, the Senate Democratic leader would apparently like our chamber to do House Democrats’ homework for them. And he wants to volunteer the Senate’s time and energy on a fishing expedition to see whether his own ideas could make Chairman Schiff’s sloppy work more persuasive than Chairman Schiff himself bothered to make it,” McConnell said.

McConnell and Schumer both said they expected to meet very soon to discuss how to proceed.

“From everything we can tell, House Democrats’ slapdash impeachment inquiry has failed to come anywhere near – anywhere near – the bar for impeaching a duly elected president, let alone removing him for the first time in American history,” McConnell added.

The White House also indicated opposition to Schumer’s requests for the Senate trial. McConnell has previously said there is “no chance” the Senate will convict and remove Trump and that he would work in “total coordination” with the White House and Trump’s defense team.

“What is Leader McConnell afraid of? What is President Trump afraid of? The truth?” Schumer asked on the Senate floor.