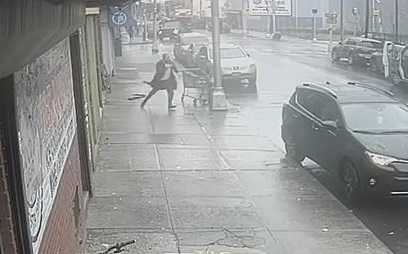 The day began like so many others for Dovid Lax, a resident of Jersey City and local business owner who was part of the fledgling community of the Greenville neighborhood. As he did almost every day, Dovid approached the fresh salad bar which Mrs. Leah Mindel Ferencz Hy’d, the proprietress the Jersey City Kosher Supermarket, prepared each morning, and began choosing his lunch for the day. He often stopped in at the grocery store run by Mr. and Mrs. Ferencz to get a quick meal while he attended to his business nearby. “I usually spoke to Mr. Ferencz on a daily basis, and my wife was friendly with Mrs. Ferencz, and they spoke often as well.”

Can you describe how the events unfolded?

“I felt it was important to remain home with my wife, since we did not know who the perpetrators were, we were afraid that there might be accomplices in the area. We all laid down on the floor and stayed away from the windows, as we waited it out for the next few hours.

“I sent out a message through our JC group that there was an active shooter by the grocery and beis medrash, and the area must be avoided, and word about the attack spread quickly.

“The police called me in the middle of the afternoon to question me, but I was too shaken up at the time to speak with them. Because the situation was so fluid, I was actually unsure if the callers were the police or part of the gang, so I declined to speak with them at the time. Later, at night, they picked me up and I did give a statement to the FBI and the homicide officers of the local police.”

How did you handle visiting the families of the victims by the shivah?

“It was very emotional, of course. I held Mr. Ferencz’s hands for a few minutes. We cried together and then we spoke for a few minutes, encouraging each other that we have to continue with our lives.”

Where do you go from here?

“Life has to go on, so I am trying to do whatever I was doing until now. Hashem gave me back my life to continue doing good things as I did before.

“I want to let people know that the neighbors have been there for us, both emotionally and by helping us with whatever they can supply. As an example, they set aside part of the Community Center for us to store all the food which was coming in for Shabbos, since we do not have use of the grocery store at this time.

“The community is in need of support since we must re-establish some of the facilities we need to continue with our kehillah. People have been generous, and we appreciate what they have done for us in the past and what they will do for us in the future.