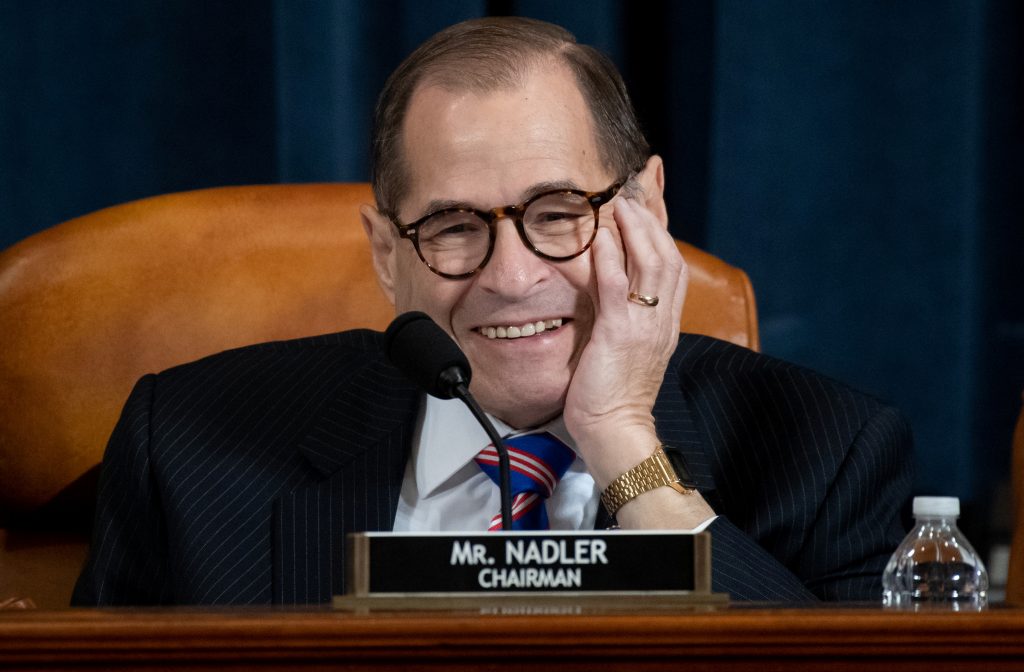 President Donald Trump faced a deadline on Friday set by U.S. House of Representatives Democrats as they deliberate over what charges to bring against him after Speaker Nancy Pelosi asked the Judiciary Committee to draft formal articles of impeachment.

The committee could draft and recommend the articles by next Thursday in an impeachment inquiry that Pelosi launched in September into the Republican president’s request that Ukraine investigate former Vice President Joe Biden, a leading candidate for the Democratic nomination to face Trump in the 2020 U.S. election.

The panel’s Democratic chairman, Jerrold Nadler, has given Trump until 5 p.m. (2200 GMT) on Friday to decide whether he or his legal counsel will participate in upcoming Judiciary Committee proceedings by calling witnesses, introducing evidence and making a presentation. Committee Republicans have been given the same deadline to request witnesses, including any they might want to subpoena.

Nadler has scheduled a committee hearing for Monday. His committee is responsible for drafting articles of impeachment and would have to approve them before sending them to the full House for a vote, which is expected before end of December.

Trump, who denied any wrongdoing, thus far has refused to cooperate with the inquiry and ordered current and former administration officials not to testify or provide documents demanded by Democratic-led House committees.

Pelosi on Thursday asked the Judiciary Committee to draft formal charges against Trump, which, if passed as expected in the Democratic-led House, would lead to a trial in the Republican-led Senate on whether to remove Trump from office. Trump’s fellow Republicans in the Senate have given little indication that they would support his removal from office.

Pelosi accused Trump of abusing his power by asking a foreign government to interfere in an American election for his own political benefit at the expense of U.S. national security. The articles of impeachment could include abuse of power, bribery, obstruction of Congress and obstruction of justice.

Pelosi appeared on Friday with other lawmakers at a news conference on climate change but did not discuss impeachment.

She did mention the president after Democratic Senator Sheldon Whitehouse pointed out to reporters that Trump had signed a full-page ad in the New York Times in 2009 calling for aggressive action to combat climate change, a contradiction of Trump’s current position. Pelosi said, “We just hope that the president will change his mind.”

The U.S. Constitution empowers the House to impeach a president for “treason, bribery or other high crimes and misdemeanors.” No U.S. president has ever been removed from office through impeachment. The last president to be impeached by the House, Democrat Bill Clinton in 1998, was kept in office by the Senate in 1999.

The probe is focusing on a July 25 telephone call in which Trump asked Ukrainian President Volodymyr Zelenskiy to open an investigation into Biden and his son Hunter and into a discredited theory promoted by Trump and his allies that Ukraine, not Russia, meddled in the 2016 U.S. election.

Hunter Biden joined the board of Ukrainian energy company Burisma while his father was vice president. Trump has accused the Bidens of corruption. They have denied wrongdoing and the allegations have not been substantiated.

Democrats also have accused Trump of abusing his power by withholding $391 million in security aid to Ukraine – a vulnerable U.S. ally facing Russian aggression – and holding back a coveted White House meeting with Zelenskiy as leverage to pressure Kiev into investigating the Bidens.

Republicans accuse Democrats of conducting a politically motivated witch hunt aimed at ousting Trump. Trump’s allies in Congress have argued that the president’s actions in Ukraine were focused on weeding out corruption and not on benefiting himself politically and smearing a domestic rival.