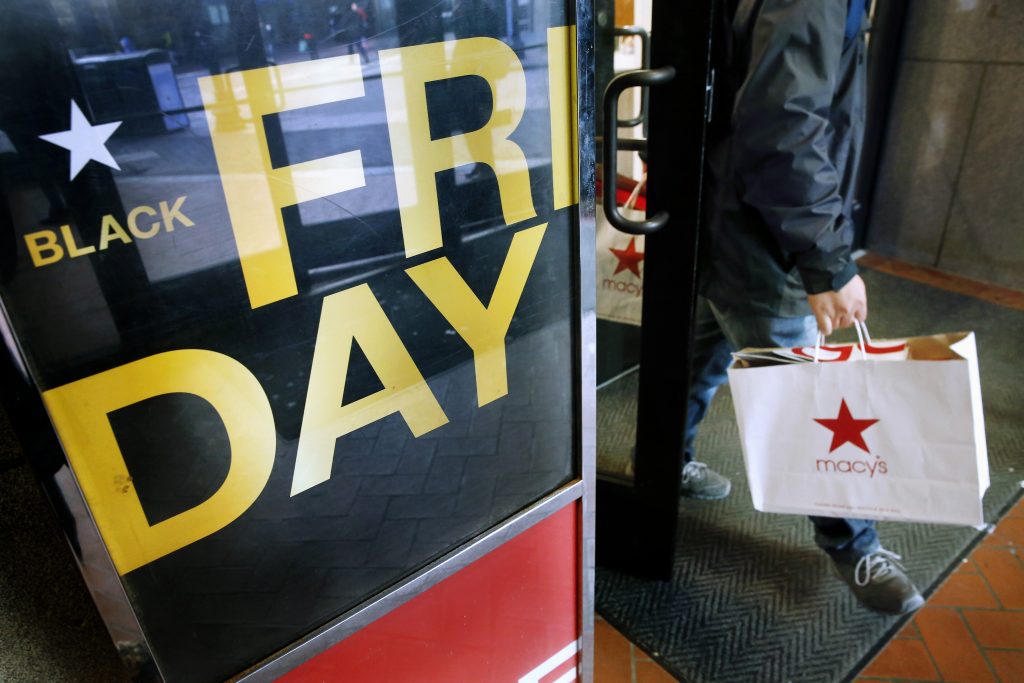 Black Friday shoppers fought for parking spots and traveled cross-state to their favorite malls, kicking off a shortened shopping season that intensified the mad scramble between Thanksgiving and Dec. 25.

Shoppers up since the wee hours slept in chairs and slumped against shopping bags at Nashville’s Opry Mills mall, known for its outlet stores. Outside, deal-seekers were still fighting for parking spots by mid-morning.

Haley Wright left Alabama at 4 a.m. to arrive at the Tennessee mall by 7 a.m. She makes the annual trip because she says the stores offer better deals and a more fun environment than the stores back home.

“I let my husband do the online shopping; I do Black Friday,” she said.

Adobe Analytics predicts a loss of $1 billion in online revenue from a shortened season. Still, it expects online sales will reach $143.7 billion, up 14.1% from last year’s shopping season.

The National Retail Federation, the nation’s largest retail trade group, baked the shorter season into its forecast, but it says the real drivers will be the job market. It forecasts that sales will rise between 3.8% and 4.2%, an increase from the disappointing 2.1% growth in the November and December 2018 period that came well short of the group’s prediction.

NRF expects online and other non-store sales, which are included in the total, to increase between 11% and 14% for the year-end period.

Adobe Analytics said that as of 5 p.m. on Thanksgiving, online sales for the day reached $2.1 billion, representing a 20.2% increase from a year ago.

“This has been a really good start,” said Rod Sides, vice chairman and leader of U.S. retail and distribution practice at Deloitte LLP. “Black Friday isn’t as important as it was in the past, but it is still the biggest shopping day. It is the most critical barometer of spending.”

Based on reports from his team who were in stores and malls over the past 24 hours, discounters like Target and Wal-Mart drew big crowds for door busters Thursday.

In Europe, though, Black Friday drew a backlash from activists, politicians and even consumers who criticized the U.S. shopping phenomenon as capitalism run amok. Climate demonstrators blocked a shopping mall near Paris and gathered in front of Amazon’s headquarters to protest overproduction. Workers at Amazon in Germany went on strike for better pay. Some French lawmakers called for banning Black Friday altogether.

Attention in the U.S. shifted Friday to malls, where traffic has been on decline with the increasing popularity of online shopping and a rash of store closings.

Few shoppers were at Newport Centre in Jersey City, New Jersey, when Latoya Robinson walked in at 9:30 a.m.

“It looks empty for Black Friday,” said Robinson, a student who lives in New York and planned to stop by Forever 21 and Macy’s to shop for herself.

Jill Renslow, senior vice president at Bloomington, Minnesota-based Mall of America, reported that traffic on Black Friday should exceed the 240,000 count from a year ago. She said many people are coming for the deals of up to 50% off but also to check out new stores.

Renslow added that many stores started promoting items earlier than last year because of the shortened season.

More than half of consumers started their shopping early this year, and nearly a quarter of purchases have already been made, according to the annual survey released by the NRF and Prosper Insights & Analytics.

Theodora Hatcher, of New York, said she started shopping two weeks ago, lured by online deals of up to 60% at Walmart.com, Amazon and Old Navy.

Still, she arrived at Macy’s Herald Square in Manhattan with her son at 6. a.m. on Black Friday, joining a steady stream of shoppers in search of deals from 40% to 60% on everything from boots to sheets.

As for the shortened calendar, she prefers it.

“It adds pressure,” she said.