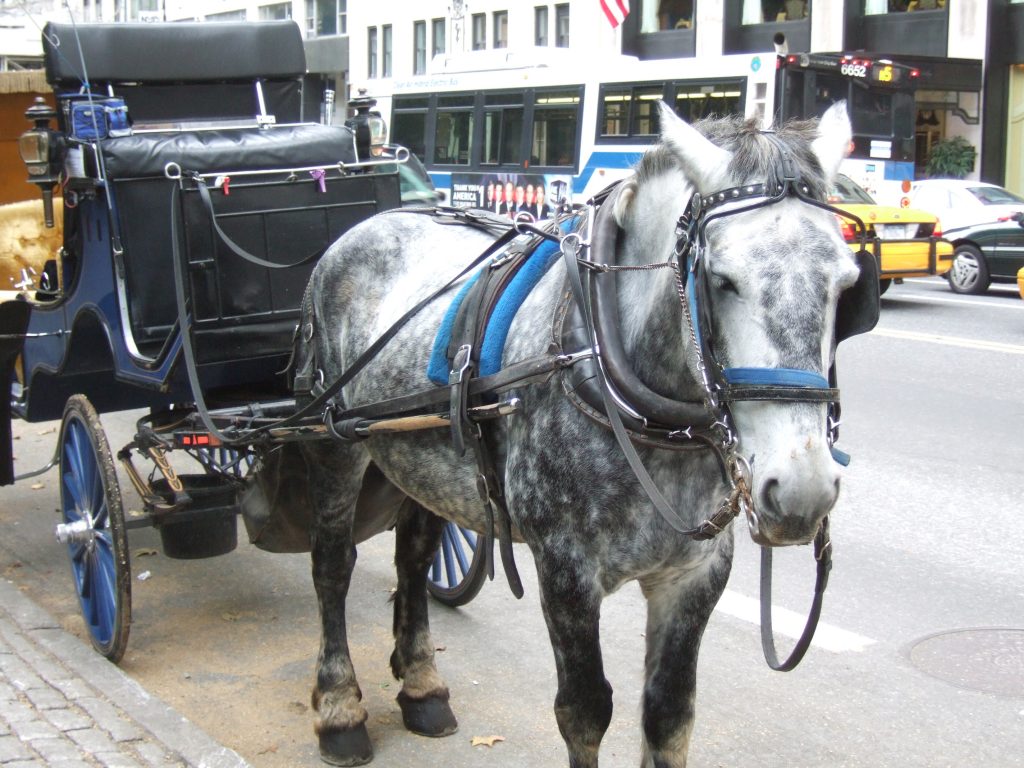 Mayor de Blasio limited when horse carriages can operate in hot weather — six years after pledging to rid the city of the industry entirely.

Hizzoner signed a package of legislation addressing animal welfare issues on Monday, including a bill that would force Central Park’s employed equines to return to the stable in certain warm temperatures and another that would ban the sale of foie gras.

Central Park’s carriage horses are already banned from working when temperatures hit 90 degrees or more in the summer and when it’s 18 degrees or below in the winter.

But the legislation signed by de Blasio would also prohibit them from working when temps hit 80 degrees and the “equine heat index” — the sum of the temperature and the relative humidity at any point — is at least 150.

Carriage drivers say the legislation will actually hurt horses’ well-being and health and would have increased the number of work suspensions this summer from 24 to 44.

But animal rights advocates, led by New Yorkers for Clean, Livable, and Safe Streets say the new standards will make the industry more humane. NYCLASS has pushed lawmakers for an end to the carriage industry for years, although critics of the group note its co-founder Steve Nislick, a real estate developer, has also in the past lobbied the mayor for an affordable housing plan in the neighborhood around Manhattan’s largest carriage stable.

“The mayor signing this bill indicates that he is part of NYCLASS’s systematic effort to destroy the carriage horses,” carriage driver Christina Hansen said, saying the bill was “unscientific.”

“It is only a victory for the power of money in politics at the expense of working people. The horses, due process and science are the losers here.”

After de Blasio’s 2013 campaign got a financial boost from NYCLASS, he promised to completely ban Central Park horse carriages “on day one.” The effort failed spectacularly, though the city recently limited pickups to inside the park at the urging of NYCLASS.

That group had to fork over a $10,000 fine to the state Joint Commission on Public Ethics for lobbying without registering as a lobbyist group. JCOPE revealed the violation last year after an investigating, and also found that when de Blasio was running for mayor in 2013, he raised hundreds of thousands of dollars in campaign contributions from NYCLASS.

During his first year in office, the mayor personally asked NYCLASS founder Nislick for a donation to a political nonprofit he’d created, Campaign for One New York, according to JCOPE.

The foie gras ban, which will go into effect in three years, prohibits restaurants and grocery stores in the city from storing or selling force-fed poultry products and food containing them, with violators owing between $500 and $2,000 in fines per offense.

“You start learning about it and it’s just terrifying,” de Blasio said of foie gras, the delicacy made from the livers of duck or geese that are often force-fed to fatten them up.

Another bill inked by de Blasio will make taking or attempting to take birds from the wild a misdemeanor subject to fines up to $1,000, an attempt to curb pigeon trafficking.

One piece of legislation signed by the mayor Monday would establish an office of animal welfare. He also approved a bill mandating the NYPD publish reports on the number of animal cruelty complaints received and arrests issued.

Another bill signed by de Blasio would require city shelters post photographs of animals within three days of receiving them in an effort to increase adoptions. And a seventh bill would require dogs entering kennels or businesses to be vaccinated for Bordetella, which can lead to “Kennel cough,” a contagious respiratory disease.