Israel Chareidi MKs: We Are Sticking With Netanyahu
Israel 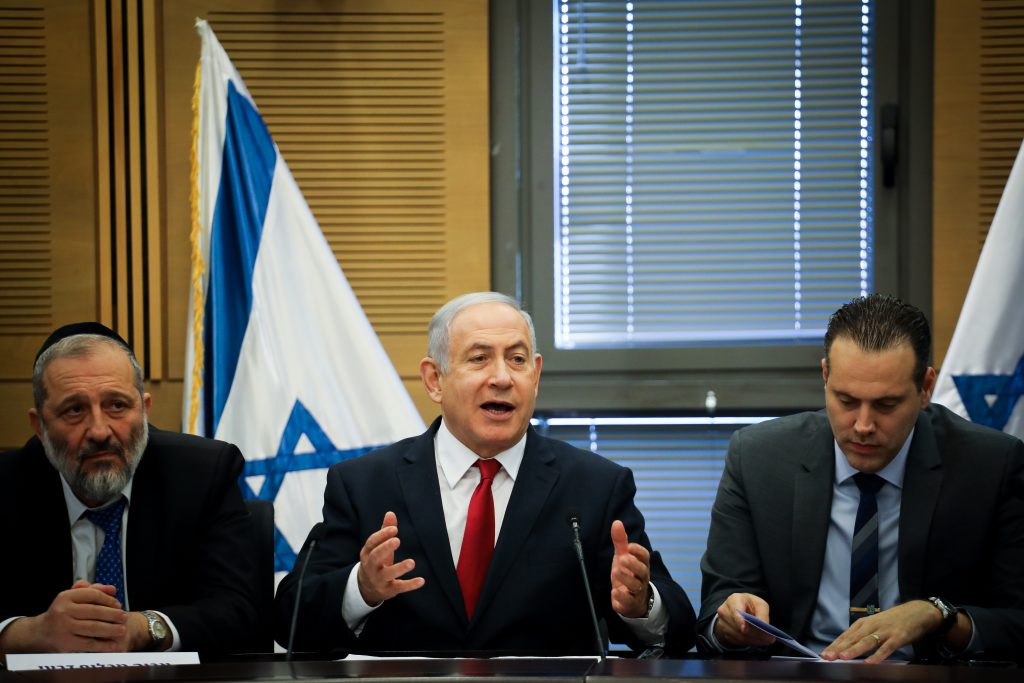 Prime Minister Binyamin Netanyahu’s bloc of 55 rightwing and religious MKs appeared to be intact Monday, as he met with all members of the bloc. “This is an emergency situation,” he told MKs. “We are at a decisive moment in the history of Israel. There is a real possibility that within 48 hours a minority government will be established that will be dependent upon supporters of terrorism.”

Netanyahu was referring to the ongoing rumors that Blue and White head Benny Gantz was set to establish a government with the assistance of the United Arab List, which would vote him in as prime minister, together with leftist parties and Yisrael Beytenu, although it would likely remain out of the coalition. “They tell us we are crying wolf” with the claims that this could happen, “but there is a real wolf here,” Netanyahu said. “All signs point to the establishment of a minority government. We cannot allow this to be established for even one day. People have a hard time understanding this because it is so unbelievable.”

Blue and White was intent on establishing this minority government, and was trying to pry MKs away from the bloc to help it accomplish its goal. “Is there anyone here they have not tried to make a deal with? If he thought it would help get rid of me, Yair Lapid would keep Shabbos twice a week and wear a shtreimel.”

Shas chairman Rabbi Aryeh Deri said that his party had been approached numerous times by Blue and White. “They were ready to promise us anything and everything, that the status quo would remain intact. But we know there is a deal between Blue and White and Avigdor Liberman to do the opposite, meaning a complete demolition of the status quo. So their ‘deal’ with us is just an exercise in cynicism. I want to make it clear: Under no circumstances will we join a minority government. The only point of departure for a government is the national unity idea proposed by President Reuven Rivlin. Anyone who thinks otherwise is in for a big disappointment.”

United Torah Judaism MK Rabbi Moshe Gafni said that “we are sticking with Netanyahu under all circumstances. Our position on this is clear.” Regarding possible compromises on the status quo, MK Rabbi Gafni said that it was out of concern for Am Yisrael that UTJ took a tough stance. “Our children won’t have any problems” with changes to the status quo, “but changing it will harm the fate of many other children in Israel. The deal on the status quo between Blue and White and Yisrael Beytenu is a disaster, regardless of what government is established. They made us offers, but we are remaining with the Likud.”

In response, Gantz called on Netanyahu to “conduct direct and honest negotiations” for a unity government. “During the meetings we have had with the Likud I came to realize we were talking to the wall. We are talking to a bloc(k). Let Netanyahu come and speak with us honestly, instead of conducting this scare campaign” against Arab MKs. “Let us sit and come to compromises on a large, liberal unity government, which is what the public voted for. Let us serve the public that sent us to serve. Let us work on behalf of Israelis, the unity of the nation, the elderly, youth, disabled, the sick, and all those who cast their eyes at us seeking a better future. It is still not too late,” he said.