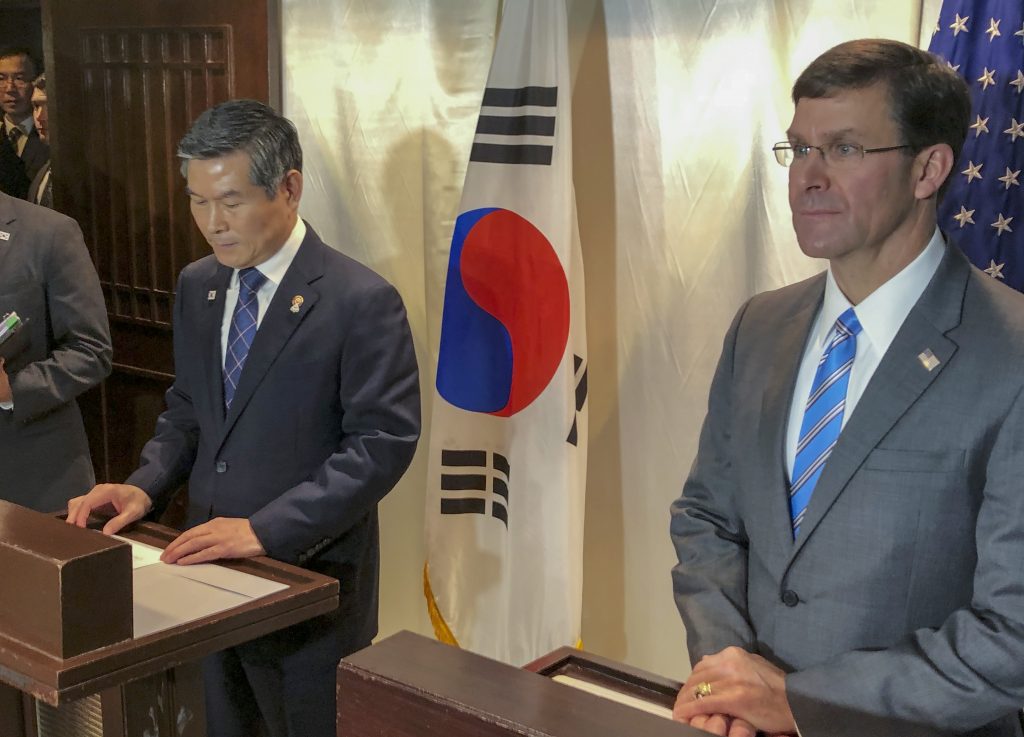 The United States and South Korea said on Sunday they will postpone upcoming military drills in an effort to bolster a stalled peace push with North Korea, even as Washington denied the move amounted to another concession to Pyongyang.

The drills, known as the Combined Flying Training Event, would have simulated air combat scenarios and involved an undisclosed number of warplanes from both the United States and South Korea.

In deference to Pyongyang, the exercises had already been reduced in scale and scope from previous years, but North Korea still objected to them regardless.

U.S. Defense Secretary Mark Esper said the U.S. and South Korean militaries would remain at a high state of readiness despite the move, and denied that the decision to postpone the drills was a concession to North Korea.

“I don’t see this as a concession. I see this as a good faith effort … to enable peace,” Esper told reporters, as he announced the decision alongside South Korean counterpart Jeong Kyeong-doo in Bangkok, where Asian defense chiefs are gathered for talks.

“I think creating some more space for our diplomats to strike an agreement on the denuclearization of the peninsula is very important.”

The drills were meant to begin in the coming days.

Still, it was unclear whether the decision by Washington and Seoul would kickstart talks with Pyongyang aimed at getting the reclusive state to give up its nuclear weapons program.

Esper said he hoped North Korea would respond to the gesture.

“We encourage the DPRK to demonstrate the same goodwill as it considers decisions on conducting training, exercises and testing,” he said, using the acronym for the North’s official name, the Democratic People’s Republic of Korea.

“We also urge the DPRK to return to the negotiating table without precondition or hesitation.”

As talks stall, North Korea has tested the limits of engagement with a string of missile launches, and experts warn that the lack of a concrete arms control agreement has allowed the country to continue producing nuclear weapons.

The missile tests have practical value for the North Korean military’s efforts to modernize its arsenal. But they also underscore Pyongyang’s increasingly belligerent position in the face of what it sees as an inflexible and hostile United States.

North Korea said on Sunday it had tried to interpret the U.S. adjustments to joint drills positively, but the recent U.N. resolution on human rights showed Washington had no sincerity in upcoming talks.

Pyongyang described the U.N. criticism of its human rights record as a product of U.S. “hostile policy” aimed at toppling its regime, and called the resolution a U.S. “political provocation.

“Even if dialogue open[s], nuclear issues will never be discussed, before the issue of withdrawing U.S. hostile policy was put on the agenda to improve relations with us,” the North’s Foreign Ministry said in a statement carried by the official KCNA news agency.

At the start of a three-way meeting with Esper and South Korea‘s Jeong in Bangkok, Japanese Defense Minister Taro Kono cautioned against optimism and called for the three nations to ensure military readiness.

Back at home, Trump has been accused by critics in Congress of being too willing to grant concessions to Pyongyang, without getting enough in return. Trump says he has secured a halt in North Korea‘s intercontinental ballistic missile and nuclear tests, significantly lowering fears of war.

In June, Trump became the first sitting U.S. president to set foot in North Korea, meeting its leader, Kim Jong Un, in the Demilitarized Zone (DMZ) between the two Koreas.

He became the first sitting U.S. president to meet a North Korea leader in 2017, when he announced plans to halt what he called at the time “very provocative” and expensive regular military exercises with South Korea.

The U.S. military later clarified that this only applied to “major” drills on the peninsula and the United States and South Korea kept carrying out other types of training.

The Combined Flying Training Event was not seen as a major drill by Seoul and Washington.

The exercises had already been scaled back from 2017, when it was called Vigilant Ace. Vigilant Ace had more than 230 aircraft, including six F-22 Raptor stealth fighters, and around 12,000 U.S. service members.

Asked when the United States and South Korea would hold the postponed drills, South Korea‘s Jeong declined to offer any sense of timing, saying only that it would be decided through “close coordination” with Washington.