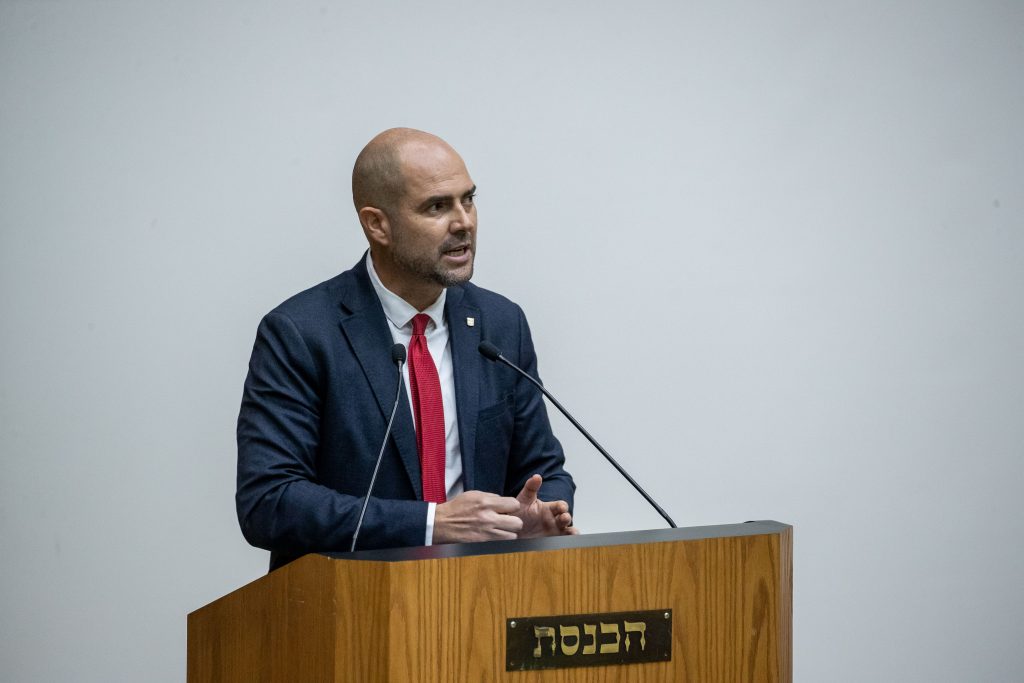 Mandelblit and Nitzan said they “reject outright” Ohana’s claims, which they characterize as “severe” and “distorting reality,” according to The Times of Israel.

They characterized such statements as the latest in “a string of slanted and partial reports in recent days which are misleading the public.”

State witness Nir Chefetz’s attorney denounced Ohana for revealing details of his client’s investigation that were under gag order.

“It’s shameful and disgraceful for a justice minister to run roughshod over the law and scorn an explicit gag order by the courts, from the Knesset podium,” Ilan Sofer said.

He called the minister’s disclosures “a shameful attempt to score political points while seriously harming [Chefetz’s] privacy” and says it “will not go unanswered.”

On Wednesday evening, Netanyahu issued a statement critical of Ohana, though without naming him.

“Even though the extortion of state witness Nir Chefetz is extremely serious and should worry every citizen,” said Netanyahu, “we must honor the gag order issued by the court.”

Earlier in the day, leftist MKs slammed Ohana after he presented in a speech to the Knesset details of how police pressured Chefetz in order to convince him to testify against Prime Minister Binyamin Netanyahu in Case 4000, also known as the Bezeq-Walla News Case. Netanyahu has been accused of influence-peddling in the case, leaning on Israeli billionaire Shaul Elovich in return for positive coverage on the Walla news site.

In his remarks, Ohana outlined further details that Channel 12 reporter Amit Segal uncovered about the questioning of Chefetz. In several reports this week, Segal portrayed heavy pressure, including threats and even physical discomfort that police used to convince Chefetz to testify that Netanyahu had ordered him to threaten Elovich and arrange for the deal to allow the Bezeq head to acquire the YES satellite broadcaster, in return for positive coverage on Walla. Chefetz also claimed that Netanyahu had sent him to threaten Yediot Achronot publisher Noni Mozes with personal defamations.

But in leaked recordings presented by Segal, police are heard exerting heavy pressure on Chefetz — forcing him to contend with flea bites that he had picked up after two weeks in prison, and threatening to confiscate his entire fortune, unless he “remembered” that Netanyahu had forced him to act in the cases.

In his broadcast Tuesday, Segal said he had other information, but had been told by police that he should not broadcast it, because it was “confidential.” It was that information that Ohana presented in a speech to the Knesset Wednesday afternoon — saying police had attempted to “set up” Chefetz by convincing someone to testify that he had acted inappropriately – unless Chefetz agreed to act as a state witness.

“The problem is that after checking his testimony, it turns out to be completely made up,” Ohana said. “So they go back to questioning him and discuss a whole different set of circumstances that were not even part of the original questioning. Then he follows the lead of police and supplies them with the details they just fed him.”

Continuing his remarks, Ohana listed several other incidents of what he called “bullying” by police and prosecutors in order to convince state witnesses to testify. “These were not ‘errors,’ but deliberate efforts by police to incriminate people, and that is what is going on in Case 4000.”

Instead of addressing the allegations, leftist MKs blamed Ohana for revealing “state secrets.” Democratic Camp head Tamar Zandberg said that Ohana “just made another ‘Netanyahu is a victim’ speech, and he used his parliamentary immunity to illegally reveal sensitive information. He is revealing details about witnesses while claiming to be standing up for the rights of witnesses, and he does not even realize how ironic this is.”

MK Karin Elharar (Blue and White) said, “When a Justice Minister outright ignores the law, Israelis have received a clear sign of how low the country has sunk.”

MK Revital Sweid (Labor) said that “instead of defending prosecutors under attack and providing them with protection, he continues with his wild speeches dictated to him from Likud headquarters, remaining a loyal servant of his master. This is shameful, and this circus must stop.”

Media reports said that Ohana had used his immunity to carry out what was termed an illegal act, but in a statement, his office denied that. “I did not invoke my immunity, and I did not reveal anything that has not been reported previously,” he said, adding that “the fact that I mentioned the police tactics will have no bearing on questioning or the investigation, because both of those are over.”

Ohana and Netanyahu’s lawyers have argued that the leaks themselves, as well as new allegations from this week that the police improperly pressured Chefetz into turning state’s witness against the prime minister, may have harmed the right to a fair trial.