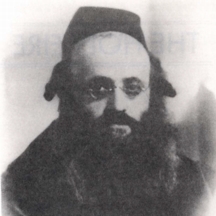 Among the many decrees that the evil regime imposed on the Jews of Warsaw was the one forbidding Jews to immerse in a mikveh. The mikvaos were closed and sealed, and large warning signs were posted on their doors warning that anyone who opened or used a mikveh would be punished with 10 years in prison up to death.

Nevertheless, the Piaseczna Rebbe decided that he had to immerse before Yom Kippur, no matter what. It was impossible to talk him out of this decision, despite the many pleas of those close to him. They described to him the danger involved in such an act. Even being found on the path leading to the mikveh was dangerous, especially for a personality like the Rebbe. We were compelled to begin efforts to realize the Rebbe’s wishes, despite the danger involved. After some secret consultations with the mikveh attendants, it was decided to violate the order and to take the Rebbe to the mikveh secretly.

On the eve of Shelosh Esrei Middos, at 5 in the morning, when Jews were already permitted to walk in the street, a small group gathered, led by the Rebbe, to make the dangerous “march” to the mikveh. Outside, it was still very dark. This was actually in our favor – we could take cover in the darkness. We would have wanted the darkness to intensify until it was at the level of “and they could touch the darkness,” and that it should last as long as possible. Perhaps then we would be able to carry out this dangerous act that we had undertaken without being detected.

The distance from the Rebbe’s house to the mikveh was quite a long one. We had ordered a “rishke” (a tricycle of sorts) to come take us, but it didn’t arrive. We waited 10 minutes but it wasn’t there.

The group began to get edgy, because the whole operation was calculated down to the second. We decided to walk, and perhaps on the way we would meet the rishke. We couldn’t order another rishke because this driver had been apprised of the situation and had agreed to take the risk. He also knew which streets we could use to best reach the destination. Apparently something had happened — which, tragically, was happening rather frequently.

Silently, we tiptoed down the stairs of the Rebbe’s home, and we encountered a new trouble that we could not have foreseen: The Polish gatekeeper did not want to get out of bed and open the gate. Moreover, he wanted to know what Jews wanted to do in the street at such an early hour. It took a generous bribe to get the gatekeeper back on good terms with us, and then he agreed to open the gate and allow us out.

Slowly we walked, in pairs, keeping a distance between us. We could hear our hearts pounding in our chests. We peered into the darkness to try and make out if the person approaching was not from that “chevreh.” If we heard heavy footfalls ahead or behind us, our limbs froze — as though we had died, that’s how scared we were. Suddenly we heard the tinkling of the night trolley heading toward us. We ran to the bus stop, but unfortunately, when the tram arrived we found that it was the one designated only for pure Aryans. We didn’t have time to wait for the tram that also transported Jews. The Jewish tram would begin to operate much later.

So we walked from street to the street on the route. Suddenly we heard the noise of a vehicle belonging to the “chevreh,” which illuminated everything around it with a strong reflector — including us. We stood, frozen in place, because it wasn’t at all pleasant in such times to encounter such vehicles on the road — most people summoned to enter those cars did not return. Our hearts almost burst from fear; there was nowhere to hide because the gates to all the courtyards were locked at that hour. Baruch Hashem, this car passed by without stopping and we advanced, with bated breath, through the dangerous places, and we finally reached the mikveh.

The bathhouse courtyard was very dark. Shadows danced on the walls and then disappeared. In a side cellar, a person was waiting for our arrival. Without a word, he motioned to us where to go. In silence, we lowered ourselves through a window into a dark, deep cellar, and the courtyard door closed behind us. We groped around in the dark, as per instructions, towards the left, until we found a hidden entrance in the wall.

With great effort, we pushed ourselves through the opening and found ourselves standing on a high plank; from there it was a jump to the ground and we were finally in the corridor of the mikveh. Without taking into consideration the great danger we were in, we advanced.

We remembered and imagined to ourselves the acts of our holy forbears during the Inquisition in Spain, who davened and held Sedarim in cellars way underground. They probably could not fathom that, 400 years later, their descendants would be in an even worse situation, and that if they wanted to immerse for Yom Tov they would have to do as their ancestors had done.

In the mikveh, we met a few other Jews who also were in on the secret that there would be a way to get into the mikveh for one hour.

We returned the same way that we came. When we emerged back into the courtyard, dawn was breaking. As we passed the entrance to the mikveh we saw the warning posted on the door by the evil authorities:

“For opening the mikveh or using it, one will be punished with 10 years in prison, up to death.”

The writer is Kalmish Hochbrand, Hy”d, who was a talmid muvhak of the Rebbe, Hy”d, of Piaseczna and his cousin, and a secretary of the yeshivah of Piaseczna. This was given by Yad Vashem to Reb Elimelech the son of Reb Yeshaya Shapiro, zt”l, the nephew of the Rebbe.